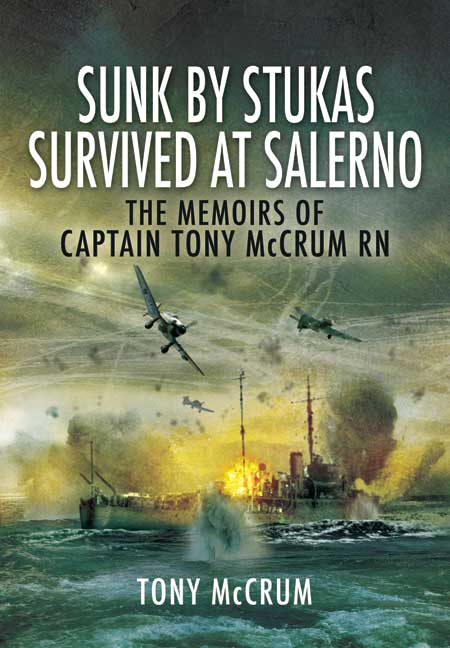 Click here for help on how to download our eBooks
Add to Basket
Add to Wishlist
You'll be £4.99 closer to your next £10.00 credit when you purchase Sunk by Stukas, Survived at Salerno. What's this?
Need a currency converter? Check XE.com for live rates

Tony McCrum was born in Portsmouth in 1919, the second son of a naval lieutenant and a mother who came from a line of naval officers that stretched back to and beyond Trafalgar. He entered the Naval College at Dartmouth in September 1932 and went on to complete his midshipman's time aboard HMS Royal Oak from 1936 to 1939.

In January 1939 he 'shipped' his first stripe to become an Acting Sub Lieutenant and joined HMS Skipjack, a fast fleet minesweeper, as navigator. The ship was initially based at Harwich as part of the 2nd Minesweeping Flotilla. Having worked-up to operational readiness the flotilla moved to their wartime station at Dover. In May 1940 Skipjack arrived off the Dunkirk beaches, one of the first ships to help the evacuation of the British Expeditionary Force. Having made several successful Channel crossings ferrying home troops, the French coast suddenly became even more dangerous as the Luftwaffe presence increased in support of their advancing army which had now reached the area. With a full load of troops aboard, Skipjack was suddenly attacked by ten Stukas and was mortally hit and sunk. Eventually rescue was at hand and McCrum was landed at Ramsgate. 19 of the crew and 294 troops went down with the ship. In June 1940 he was appointed First Lieutenant of HMS Bridlington, a new minesweeper of the same class as Skipjack. In June 1941 he joined HMS Mendip, a Hunt Class destroyer with the task of defending the east coast against e-boat attack. Then came a complete change when he was ordered to HMS Largs to become the Signals Officer in Charge. This was an ex West Indies banana boat that had been converted into a Landing Craft Headquarters Ship. Her task was to carry an admiral and general who would control all the forces in the early days of an assault. In April 1943, Largs arrived in North Africa and began preparations for the Sicily landings. Operation Husky started on 8 July and proved a complete success with a bridgehead being established within hours. The next step was Italy, the Salerno landing. McCrum was again heavily involved with the HQ planning staff and the US Navy and was in charge of the ULTRA operations within the area. Salerno proved to be a much harder battle and was well defended. Having spent eighteen months working in the Mediterranean theatre, and various landings in France, McCrum was ordered home and joined the destroyer HMS Tartar on 15 January 1945 as Staff Signals Officer, 8th Destroyer Flotilla. They were bound for the Far East and the war with Japan and it was there, in Trincomlee harbour that the end of WWII was celebrated.

The author's perception and good sense make this a memoir of distinction and a most worthwhile addition to the naval literature of the Second World War.

A superb account of one man's 1939-1945 war experiences in the Royal Navy. He was involved in minesweeping and sunk at Dunkirk whilst helping the evacuation of the BE. Later in the war he helped to mastermind Operation Husky and the landing at Salerno. Excellent reading.

This is a rare and delightful naval autobiography which in two volumes spans the war years and the atom age to follow.

This is not a history: I’m so glad it’s not; if you need to know the facts there are so many titles out there. Instead it’s a deeply personal progress through these times and is a treasured insight into how life actually was then, and for that I’m sincerely grateful that Captain Tony McCrum has shared it with us.

I really enjoyed this book, really enjoyed it. Tony McCrum describes the most extraordinary events of his life as a junior officer during the Second World War. The narrative is delightful, the humour comes through. We 'grow up' with the young McCrum - only 20 when he starts the war, and a seasoned veteran and true survivor when he finishes. A true reflection of the spirit which we have come to expect from the men of Tony McCrum's generation.

The memoirs of Captain Tony McCrum RN, including: joining the Navy in 1932, his service throughout the Second World War and his retirement in 1963 when he embarked on a career in industry.

This is obviously the work of a thoughtful and modest man. Sunk by Stukas is a valuable contribution to our knowledge of war at sea, covering naval training, the work of mine-sweepers, the landings in Italy towards the end of the conflict and service in the British Pacific Fleet. McCrum survived the dramas of Dunkirk and also run-ins with authority as a young officer and he vividly conveys both the moments of black humour and also fear that came his way during the war. Highly recommended.

Tony McCrum, born in 1919 to a navy lieutenant father and a mother who came from a family of naval officers, tells the story of his own naval journey throughout WWII. From his beginnings at the Naval College of Dartmouth in 1932; through his completion of midshipman's time aboard HMS Royal Oak between 1936 and 1939; and subsequent time aboard HMS Skipjack, HMS Bridlington, HMS Mendip, and HMS Largs, his story graphically and captivatingly recounts the triumphs and tribulations of his encounters aboard each throughout the years between 1932 and 1945. It was in this latter year that as Staff Signals Officer of 8th Destroyer Flotilla, having worked his way through the ranks, and bound for war with Japan, that finally the end of WWII was celebrated. This book is a notably gripping recollection of one man's personal account of this period, and will be enjoyed by military historians, students of history, and inspirational story seekers alike.