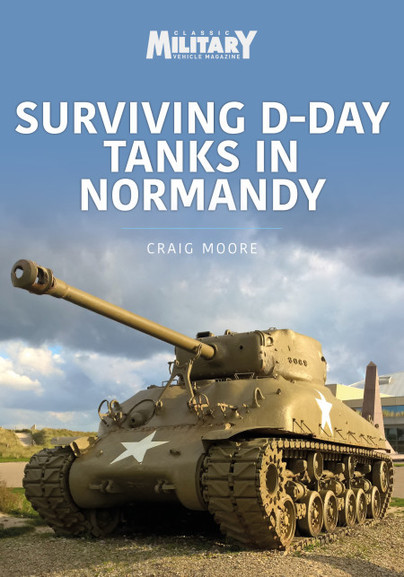 Add to Basket
Add to Wishlist
You'll be £14.99 closer to your next £10.00 credit when you purchase Surviving D-Day Tanks in Normandy. What's this?
+£4.50 UK Delivery or free UK delivery if order is over £40
(click here for international delivery rates)

On 6 June 1944, D-Day, the Allied invasion of northern France began. Thousands of Allied soldiers, along with their equipment and vehicles, landed in Normandy on five main beaches. Most tanks arrived on the beaches by landing craft, and a few days later, after the construction of the temporary Mulberry harbour at Arromanches-les-Bains, tanks, along with supply lorries and more troops, started pouring from the ships into the ever-expanding beachhead. This guide book examines the surviving World War Two tanks, tank turrets and other armoured fighting vehicles currently on display in Normandy, France, most of which took part in the fighting following the D-Day landings. The background history of each vehicle is explored and location details are given. Many of the tanks are exhibited in museums, but a number are on display as war memorials, with some being located in difficult-to-find places. Also included are the fascinating, little-known stories of the allied tank attacks on two separate German beach defence fortifications at Gold Beach, both of which survived the initial Air Force bombing and Navy bombardment. They have been preserved and can be visited.

"This work is a very useful guide to the visitor with an interest in the Normandy Landings and subsequent Campaign."

Craig Moore is an editor and author of many articles on armour for magazines including Classic Military Vehicle. He lives in south west London and regularly travels around the world visiting tank museums. He runs www.tanks-encyclopedia.com, as well as www.tank-hunter.com. His websites and social media are followed by over 11,000 military enthusiasts.