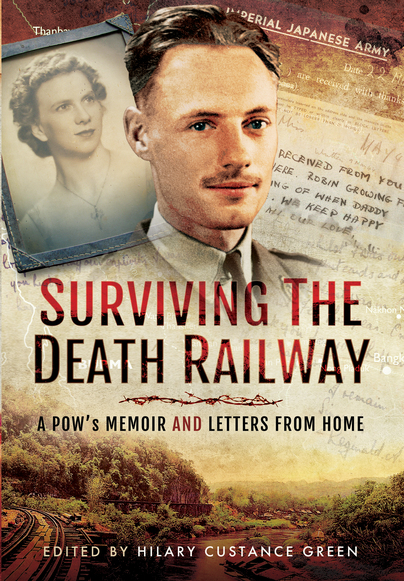 A POW’s Memoir and Letters from Home

You'll be £4.99 closer to your next £10.00 credit when you purchase Surviving the Death Railway. What's this?
Need a currency converter? Check XE.com for live rates

The ordeals of the POWs put to slave labour by their Japanese masters on the ‘Burma Railway’ have been well documented yet never cease to shock. It is impossible not to be horrified and moved by their stoic courage in the face of inhuman brutality, appalling hardship and ever-present death.

While Barry Custance Baker was enduring his 1000 days of captivity, his young wife Phyllis was attempting to correspond with him and the families of Barry’s unit. Fortunately these moving letters have been preserved and appear, edited by their daughter Hilary, in this book along with Barry’s graphic memoir written after the War.

Surviving the Death Railway’s combination of first-hand account, correspondence and comment provide a unique insight into the long nightmare experienced by those in the Far East and at home.

The result is a powerful and inspiring account of one of the most shameful chapters in the history of mankind which makes for compelling reading.

The material is powerful enough in its own right. She has done a great job and the book is a great memorial not only to her parents but also to all the men and women who went through the experience. At the end of the book, there is a call to anybody who might have information about families of members of the Men of 27 Line Section to get in touch with the editor. Don’t forget to pass the message on if you know anybody connected to the men or with contacts who might have more information. In summary, this is a fantastic book for those interested in World War II, both from the point of view of war action and of the home front, those interested in stories about PoW, tales of human bravery, valour, endurance and the heroism of extraordinary ‘ordinary’ people. Don’t miss this book and don’t forget to pass it on to anybody who might have known a member of the unit.

As featured on Suzy Henderson Blog.

As featured on Lowfell Writers Blog.

Hilary Custance Green has done an amazing job bringing order to the disparate materials at her disposal and bringing them into a coherent narrative. I read that it took her six years to complete this work and I can well believe it. But her efforts have paid off in an excellent book which, among other things, is a fitting tribute to her amazing parents.

This is an extraordinarily interesting book. It reduced me to tears several times. It is so much more than just another account of the harrowing conditions experienced by Far Eastern prisoners-of-war. The memoirs and letters of Barry Custance Baker, who suffered on the Burma railway, share equal billing with the experiences of his wife in England. Phyllis became known as the “Mother of the Regiment” as she kept in touch with the families of the men of 27 Line Section who had served under her husband in Singapore and were taken prisoner with him.

Letters from these families have all survived and are a testament to the anxiety of the women whose husbands, brothers and sons were prisoners of the Japanese. In addition to all this, the letters between Barry and Phyllis written after his release, during the months of his recuperation and long voyage home, show the rebirth of a love affair interrupted by war.

In breathing life into the story of her parents’ struggles during these years, Hilary Custance Green has not only written a moving tribute to two extraordinary people, she has also widened the canvas to pay tribute to all the men of 27 Line Section and their families. I cannot recommend this book too highly.

The Death Railway was the infamous Burma-Siam railway, planned by the Japanese and built by the forced labour of their prisoners of war during the Second World War. Captain Barry Custance Baker headed up a Royal Signals unit of 69 men, 27 Line Section, fighting and working in Malaya from September 1941. Captured when Singapore fell to the Japanese in February 1942, the unit was initially split up; from November 1942, however, a sizeable number of those men of 27 Line Section who had survived thus far were drafted to work on the Thai section of the railway.

Baker’s diaries of the time, buried for
safe-keeping at the end of the War, are entombed in the foundations of a building. In his eighties he composed a memoir of the period; and this, together with letters exchanged with his wife before capture and on release, form the core of this account, prepared by their daughter Hilary.

Two aspects make this a work of distinction. The first is the quality of the writing; the second is the body of material about the families of 27 Line Section which Dr Green has mobilised, complementing the men’s experiences with those of their wives, parents and children, providing a powerful and unusually complete picture of the impact of total war.

Dr Green has mastered a considerable body of messy material, primary and secondary, and as befits a published novelist, moves her narrative crisply and clearly along. She properly makes no assumptions about readers’ prior knowledge, always providing enough information but not overburdening her story or allowing it to sag. Her use of direct quotation is deft and vivid and she has clearly learned that less is often more. Restraint and quiet understatement point up the privations suffered.

A severe privation for families at home was a total lack of information for many months. Then as some news trickled out, it became clear that those who imagined that the Japanese army would behave to their British captives as the German army did, deluded themselves. To her father’s memoir Hilary Green has added the letters, written into a void, by her mother to her father after he was taken captive, only some of which reached him at the end of the war. She has also made powerful use of the correspondence with the families of the other men of the Unit which Phyllis Baker built up, to exchange and share information and to cheer and sustain morale. Her husband’s description of Phyllis as the ‘Mother of the Regiment’ was well earned. Barry and Phyllis had first met as Cambridge undergraduates and it is plain that the intellectual and social resources which both could muster sustained them powerfully in this period and as they re-built life after the War.

Gillian Sutherland is a Fellow of the Newnham College. She is an historian of modern Britain, now retired from full-time teaching.

An intensely moving insight into the consequences of captivity on both FEPOW and family at home.

‘Surviving the Death Railway’ is a true story of the frustrations and emotions of Phyllis, a young mother seeking news of her husband Barry Custance [sic] Baker missing in action somewhere in Malaya.

Using her mother’s letters and memoirs written by her late father, Hillary has brought together an excellent story, a touch of Romeo and Juliet, but with a happy ending.

For people of a certain age the story is poignant, a page turner and occasionally a catch in the back of the throat. For a younger generation the facts are largely unknown, overshadowed the war in Europe.

Hilary Custance Green has BAs in Fine Arts (UEA) and Sculpture (St Martin’s School of Art) and spent twenty years sculpting. In 1993 she graduated with an Open University BSc in Psychology and spent fifteen years working in brain science, gaining a PhD in Cognitive Psychology from Cambridge in 1999.
She has had three novels published and has spent six years researching this book.
Born in Malaya in 1915, Barry Custance Baker married Phyllis, a fellow Cambridge graduate in 1939. Barry joined the Royal Corps of Signals and this book records his experiences as a POW. After gaining his freedom, they had three more children post-war. Barry stayed in the army until 1959, then took up teaching. Phyllis filled her life with voluntary work and the theatre.