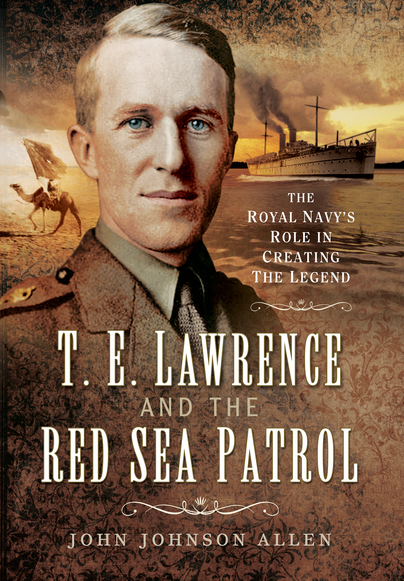 The Royal Navy's Role in Creating the Legend

T.E. Lawrence and the Red Sea Patrol has been shortlisted for the Maritime Media Awards 2015 for the Mountbatten Literary Award

You'll be £4.99 closer to your next £10.00 credit when you purchase T. E. Lawrence and the Red Sea Patrol. What's this?
Need a currency converter? Check XE.com for live rates

Although many books have been written about T E Lawrence and the Arab Revolt, none before has fully explored the pivotal role of the Royal Navy in the Red Sea at the time. This is the first book to be written about the Navy's role in the success of the Arab Revolt in the creation of the legendary figure of Lawrence of Arabia. Following extensive and detailed research into the activities of the ships of the Red Sea Patrol by the author, a maritime historian and former Merchant Navy officer, it has become evident that, without the work of those ships, the Arab revolt would have failed and T E Lawrence would have remained an obscure officer in the military bureaucracy of Cairo.

Lawrence was very aware of the importance and relevance of the Royal Navy in their operations in the Red Sea and commented on it on many occasions, notably in 1918, saying 'The naval side of the operations, when the time comes to tell of it, will provide a most interesting case of the value of command of the sea..'. Until now, nobody has investigated this angle in any detail. By doing this so comprehensively, this book gives a fresh dimension to the Lawrence of Arabia legend.

As featured on The British Empire Blog

... Johnson-Allen makes the point made that without control of the Red Sea, the Arab revolt would have foundered. The navy made possible the capture of key ports from Jeddah north, up to Aqaba, and the logistical train, psychological boost, and fire power afforded by the Red Sea patrol were undoubtedly vital to maintaining the momentum of the revolt. This book will appeal to readers interested in a description of the operations, written by a former sailor in command of naval matters.

Johnson-Allen provides a valuable service in reminding the modern reader of how sea power works.

This book adds a new dimension to the Lawrence of Arabia story, it is the first account of the Royal Navy's pivotal role in the success of the Arab Revolt.
With many varying photographs, lines drawings and maps for all those fascinated by this period of political and military history.

One of Johnson-Allen's strengths is his earlier experience as a Merchant Navy officer. He understands the topography of the Red Sea coastline and also makes good use of the ship's logs at the National Archives.

Johnson-Allen brings and engaging light to bear on a key aspect of the Arab Revolt.

For those of you who only see Lawrence charging about the desert on a camel, here is a huge corrective.

As Lawrence himself wrote (as cited by the author): "The Red Sea patrol-ships were the fairy-godmothers of the [Arab] Revolt. They carried our food, our arms, our ammunition, our stores, our animals. They built our piers, armed our defences, served as our coast artillery, lent us seaplanes, provided all our wireless
communications, landed landing parties, mended and made everything. I couldn't spend the time writing down a tenth of their services."

That’s what they did. This is the story of who they were and how they did it, researched and presented by an author who has himself used the sea and is familiar with the area. It is a particularly recondite piece of naval history - as Lawrence himself remarked, ‘a sideshow within a sideshow’. It is also a pocket guide to successful amphibious warfare...

... The author has done a service to the men who sweated it out in the ships and made the Arab Revolt possible, and he has, a century later, redressed a situation where any public account of their work was at the time suppressed for political reasons.

The book is packed with information and detail most readers will not be aware of - in fact most will not know of the Red Sea patrol. The author has firmly placed the effectiveness of the Patrol on the record and how without the men who worked for years in the unforgiving climate contributed to the success of the Revolt and the legend of TE Lawrence.

The TE Lawrence Society Newsletter No. 111

TE Lawrence and the Red Sea Patrol is a quick, easy and enjoyable read that challenges one's perceptions and opens up new ways of understanding modern joint operations.

This is the first book to be written about T E Lawrence and the Arab Revolt; none before has fully explored the pivotal role of the Royal Navy in the Red Sea at the time. ... This book gives a fresh dimension to the Lawrence of Arabia legend.

John Johnson Allen went to sea in 1961 with BP Tanker Company as a navigating apprentice, rising to the rank of Second Officer. He then pursued a career in the property industry. He has a Master of Arts in maritime history, a Liveryman of the Honourable Company of Master Mariners and a Fellow of both the Royal Historical Society and a of the Royal Institute of Navigation. He has written two previous books Voices from the Bridge (with David Smith) and They Couldnt Have Done It Without Us: The Merchant Navy in the Falklands War. He lives in Norfolk.