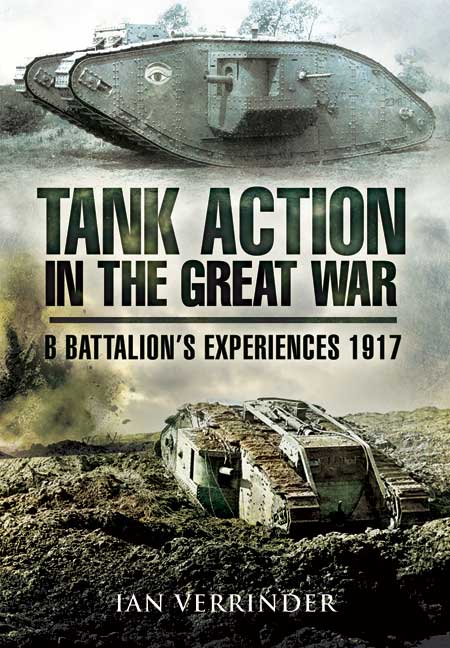 Add to Basket
Add to Wishlist
You'll be £19.99 closer to your next £10.00 credit when you purchase Tank Action in the Great War. What's this?
+£4.50 UK Delivery or free UK delivery if order is over £35
(click here for international delivery rates)

Harry Moon and eight fellow members of the Royal Sussex Regiment all volunteered to transfer to B Battalion, Heavy Branch, Machine Gun Corps in January 1917, (later the Tank Corps) to serve in the revolutionary Mk IV Tanks. After describing his experiences, training and fighting on the Somme with the Royal Sussex, the book provides a unique description of the experiences of a tank crewman on the Western Front. The first action was at Messines in the Mk IV and Harry's story is embellished with accounts of gallantry by others and other anecdotes. After the battle he took part in two tank demonstrations for Royalty.

The 3rd Battle of Ypres followed in July 1917 resulting in the death of one of Harry's fellow volunteers. A full and thrilling account of the mass use of armour at Cambrai follows after descriptions of trials of fascines and barbed wire clearing equipment. Here the Battalion successfully achieved their first, second and third objectives and celebrated with a white table cloth lunch on the Hindenburg Line! Tragically disaster was to follow at the attack on Fontaine-Notre-Dame on 23 November where there were seventy per cent casualties.

Using personal accounts, Battle History reports and the Battalion War Diary, Tank Action in the Great War is a superb account of the early use of armour and the dangers for the crews. An additional feature is the array of exceptionally rare contemporary photographs of tank trials and combat casualties.

Ian Verrinder's research is very good and he has a genuine empathy for his subject.

Ian Verrinder is a professional railwayman – a real train driver (every schoolboy’s proletarian hero!) – and, like so many others, came to a serious study of the Great War through an interest in a family member. His great uncle, Harry Moon, had joined the 8th Royal Sussex and might have been surprised when they were made a pioneer battalion. After serving with them through the Somme, we find that he and eight of his mates, all presumably with Harry’s interest in all things mechanical, or perhaps just bored with the pioneer’s life, answered a late- 1916 call for volunteers to serve in the new and still secretive Heavy Branch of the Machine Gun Corps.

Ian then delivers a master class in ‘amateur sleuthing’ as he follows the careers and fates of these nine volunteers as they serve as tank crew in B Battalion in its battles of 1917 (before it becomes 2nd Battalion, The Tank Corps). The book benefits from the detailed study of one small unit, of its war diaries and the plentiful reminiscences of its officers. You develop a real interest in these men and their trials and tribulations as the use of this ‘novel engine of war’ slowly improves.

They do their best in their first battle at Messines, but they know this clinical victory had little to do with tanks. (I will allow Ian his misconception that it was the explosion of huge mines that won the battle – he is in good company there! It was the utterly devastating artillery barrages that did the business.) Their next efforts, during Third Ypres, must have been depressing. It seems that three in every four tanks hardly made it across the start line because of ditching, bellying and sundry mechanical failures.

What really comes across well is how these men, living cheek by jowl with each other and their machines, learn their duty well and continually improve their understanding of the possibilities and limitations of the tank in 1917, and how it might be made more effective.

More than any other book, and entirely to its credit, this one gives proper attention to the training of the men, and the discussion of their preparations for Cambrai is first-class. The way in which they thought through the problems posed by the massive Hindenburg Line defences, coming up with innovative ideas for crossing wide trenches etc, is covered very well. Initial success on 20th November was a great morale boost for them. The fighting for Fontaine Notre Dame, when tanks found out just how dangerous it was to fight for a village without supporting infantry, was a heartbreaker. I found his page or two of reflections on this fight, where he views the action as if seen from the air, a pure delight to read. Harry Moon got a well-earned MM. Three of his mates were killed; one was captured; one was commissioned. The other three made it through. There are some nice stories along the way. One tank is fitted with a carpet so the Queen of the Belgians can take a ride; her husband hitched a ride in an ‘unmodified’ machine and found it a very unpleasant experience. We see 2/Lt Haseler grinning into the camera that filmed a visit by King George and Queen Mary – he had just survived a spectacular thirty foot drop seen in the film. It is a bit of a wrench to read of him killed in his tank ‘Bulldog’ just four months later.

An excellent choice of photographs, and imaginative use of maps so we can plot the fate of each individual tank in their battles, round off this good book. I hope the editors at Pen and Sword encourage Ian Verrinder to continue his study and tell us of the 2nd Battalion, Tank Corps and how it developed its experience in 1918.

How nice, a book about First World War tanks that does not have the word 'myth' in the title. And this is a remarkable book in other respects as well.
You might think that Jean-Luc Gibot and Philippe Gorczynski's celebrated book is the definitive work on tanks at the Battle of Cambrai and so it is, if you are studying the overall picture but what Ian Verrinder has done is to apply a magnifying glass to a specific battalion.
The project seems to have started out as a family history investigation which, fortunately for us, got out of hand. Verrinder started out researching the wartime career of his great uncle Harry Moon, a private in 8th Battalion the Royal Sussex Regiment who, with eight of his colleagues volunteered in January 1917 to join B Battalion, Heavy Branch, The Machine Gun Corps as it expanded from the original B Company of 1916. Quite what motivated these men to transfer is not clear but the Royal Sussex spent a long time on the Somme in 1916 and that may well have been enough for anyone. On the other hand nine men out of a battalion is not many and it was probably at this point that the author chose to cast his net wider and examine other volunteers, officers and men, in search of an answer.
This, if anywhere, is where the transition from family history research to a full blown book takes place because, all of a sudden, a rich seam is exposed. From archives such as the Tank Museum and the Imperial War Museum along with some remarkable private collections the author was able to trace recollections of other members of the Battalion including three officers; two of whom will be familiar to us. Captains Norman (Mark) Dillon and Basil Groves, as they were then and the less familiar, but in many ways even more striking Captain Frank Vans Agnew whose correspondence and personality seem to dominate so much of the book.
One could go on for ages about the useful information to be found in these pages but space is at a premium and in any case why spoil it for the reader? All I will say, from a personal point of view is how welcome I find the detailed account of what occurred in Fontaine-Notre-Dame on 23 November 1917. When we sally forth from Cambrai on those Regimental pilgrimages we invariably pass down the long main street of the village, and again on the way back, without much being said about what went on here on that date. Yet here was probably the high point of the battle as far as the Tank Corps was concerned; scene of some of the most desperate fighting. It deserves the attention that this book gives it.
Although this book might appear to be focused on the brave ancestors of 2nd RTR it is a marvellous source not only for members of the Royal Tank Regiment past and present but for anyone hoping to expand their knowledge of the subject. It is a model of dedicated research, informative and immensely readable. I learned a great deal from it.