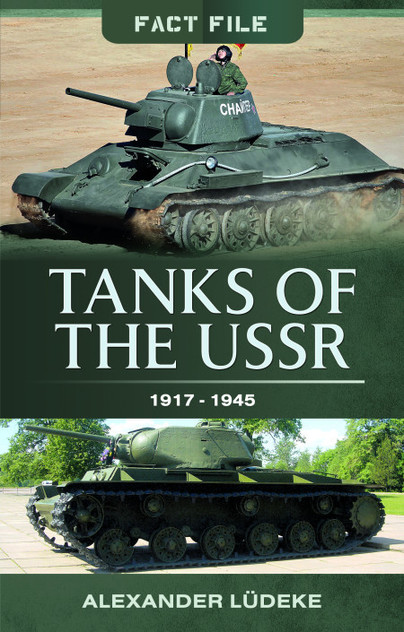 Click here for help on how to download our eBooks
Add to Basket
Add to Wishlist
You'll be £4.99 closer to your next £10.00 credit when you purchase Tanks of the USSR 1917-1945. What's this?
Need a currency converter? Check XE.com for live rates

The Soviet Union had already begun building an armored industry as early as the 1920s. Although initially limited to reconstructing and developing Western European armored vehicles, an independent line of powerful and easy-to-produce models had been established by 1939. Even after the Second World War, the USSR expanded its armament force considerably, even planning to cross western Europe in a massive armoured wave in the event of any conflict with NATO. In this book, Alexander Lüdeke looks at all the important Soviet tanks that were built from 1917 up until the end of the Second World War

Highly Recommended for those who need a quick ‘one stop’ basic reference for Soviet Tanks of WW2.

This volume gives detailed specs for every Soviet tank from the time of the Revolution to the end of World War Two. Even obscure vehicles that never went into mass production are covered, often with photos of the prototypes.

In reading this book I was struck by the astronomical growth of the Soviet tank forces in a period of less than 30 years — but really over a period of only 15 years.

If you are unfamiliar with Russian armor of this period, or simply want to get a useful insight into its development, you will find this book exceedingly useful.

As an entry level reference work the book is clear, concise and features all of the major types immediately recognisable to most, but it also includes details of less well known vehicles, especially those in the early part of the 20th Century and pre-WWII.

This book does what its title states. It reviews the tanks used by the USSR between
1917 and 1945. In the early years Soviet tank designs were based onWestern armoured
vehicles but by the start of World War 2 they were producing their own designs.
The author has done a splendid job in reviewing as many types and sub-types as
possible. He does note that he has covered all the possible sub-types but sometimes
there is a lack of data or they were beyond the scope of the book.

For each tank he has produced a narrative outlining the background to the type and there
are summary tables of the key parameters such as weight, dimensions, crew, armament
etc. These details are sufficient to answer most queries on the type.

The volume is divided into four main sections on the tanks – Light Tanks, Fast Battle
Tanks, Medium Tanks and Heavy Battle Tanks. Each of these classifications are based
on the Soviet categorisation system (albeit a translated version) and they show how the
USSR’s designs evolved.

This book will certainly appeal to those interested in Soviet tanks especially those of
World War 2 and their predecessors. Modellers, re-enactors and enthusiasts will find it
a most valuable text.

A useful guide not only to the main battle tanks but also to the rarer examples of Soviet weapons development.

This very affordable book provide a wealth of information on full period from the October Revolution to the end of World War II for the Red Army armoured capability. The photographs are very interesting an include some that have suffered from the conditions at the time they were shot and subsequent storage, but provide important imagery. Highly Recommended.

This fact file is quite amazing for the amount of detail it manages to cram into its pages. The history and development of Russian tanks from the end of WW1 to the end of WW2 is covered in depth, with information in some cases, that I have previously not heard of, despite my many years of reading such things. I particularly enjoyed the sections on early tanks that took part in WW2....even if not originally expected to. It is a quite informative and readable account that shoots down a few myths and concentrates instead of the real details. It does not cover self propelled artillery, which I presume will be another volume. Certainly if they had, this one would have been rather too large, so I can understand why they did not. I would recommend this book to most readers, but in particular it would be a handy book to have in your bag if you are a war gamer that attends club games and has 'that person' who always claims to know more than everyone else. A quick look at the pages can shoot that person down with ease. Oh and one thing I was surprised about. The KV series of tanks were actually the KW series. The inventor named it after the first two initials of his father in law's name. KW.
Highly recommended.