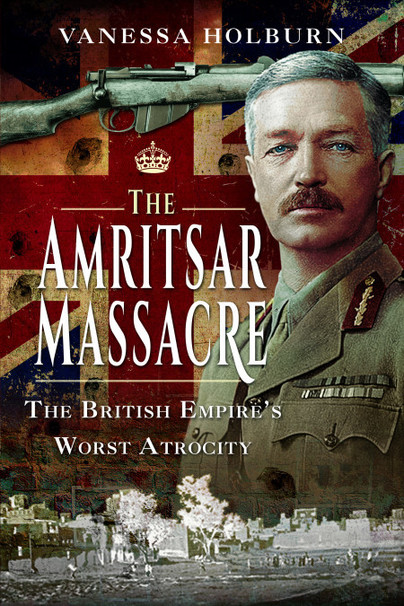 Add to Basket
Add to Wishlist
You'll be £12.99 closer to your next £10.00 credit when you purchase The Amritsar Massacre. What's this?
+£4.50 UK Delivery or free UK delivery if order is over £35
(click here for international delivery rates)

The shocking massacre of 379 unarmed Indians in the enclosed Jallianwala Bath park on the command of a British army officer on April 13th, 1919 is considered a brutal example of colonial abuse. Immediately afterwards martial law was established with harsh penalties and punishments. Often considered as the darkest period of the Raj, the massacre helped galvanise the Indian Nationalist movement, making full independence inevitable.

Yet both the Queen and former Prime Minister David Cameron have side stepped calls for an apology for the mass shooting during official visits to Amritsar. One hundred years on, is it time to say sorry?

This book examines the context in which the infamous event took place – and asks why something that happened 100 years ago remains so controversial. Did the order to fire prevent further native and imperialist bloodshed in the Punjab? Was enough done at the time to investigate if General Robert Dyer acted alone or with the full support of his superiors? Who was ultimately responsible for the 1,650 rounds of ammunition discharged that day?

Readers will discover how tensions within the region – and political and professional ambitions on both sides – combined to create a chain of events that signaled the beginning of the end for the British Raj.

I knew shamefully little about the Amritsar Massacre until I picked up this book - and it answered all my questions. Following a clear structure it gives a concise account of British rule in India, making it easy to read and understand what happened at Amritsar, why it happened and the implications on events that followed. A good introduction to this period in history.

⭐⭐⭐⭐⭐
This is an accessible read – and explains how and why the British ended up in charge of India and then goes on to outline the political build up to the massacre at Amritsar. I like the way the book focuses on the need for a proper understanding of the events across all sections of the British population – and the ins and outs of why an apology is needed. It shows why the massacre is still politically relevant today.

This book is for you if you’ve never studied British Indian history but want to understand more about the realities of what went on. It’s not a heavyweight historical re-telling – but I don’t think it’s supposed to be. This is about why Amritsar matters today – and it achieves that goal

At Amritsar, mistakes and misunderstandings of both sides combined to create a tragedy. It happened against a background of civil disobedience and a fight by some parts of Indian society for independence. Those are always circumstances where terrible acts of violence can occur. The author has reviewed this background, the people and politics involved, and left the reader to decide whether there is any need or merit for contrition. It is an interesting review that casts some new light on an infamous event in history.

Article: 'Twyford author asks: ‘Is now the time to say sorry over Amritsar?’ as featured by

A journalist with over 20 years experience, Vanessa Holburn has worked and travelled extensively in Asia, with some of that time spent in India.

Vanessa’s work has appeared in national consumer and trade press and digital outlets. The mainstay of this work has required her to take complicated subjects and make them accessible and interesting to read. Discovering details – and presenting them in an engaging way – is her passion.

Her consumer press credits include Woman’s Own, Yours, Dogs Today, Ask The Doctor, The Mirror, The Sun and The Independent on Sunday.