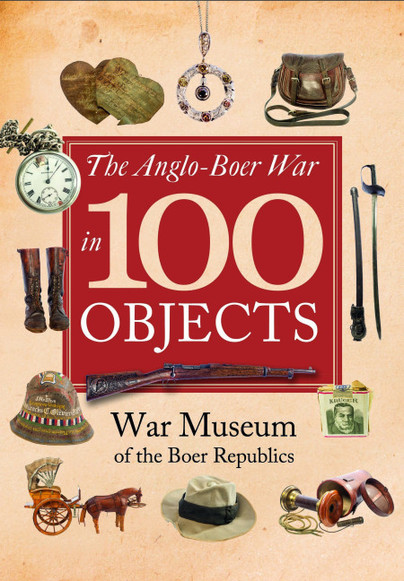 The Anglo-Boer War in 100 Objects (Kindle)

By The War Museum of the Boer Republics

Click here for help on how to download our eBooks
Add to Basket
Add to Wishlist
You'll be £4.99 closer to your next £10.00 credit when you purchase The Anglo-Boer War in 100 Objects. What's this?
Need a currency converter? Check XE.com for live rates

The Anglo-Boer War in 100 Objects brings the victories and the tragedies – and the full extent of the human drama behind this war – to life through 100 iconic artefacts.

While a Mafeking siege note helps to illustrate the acute shortages caused by the siege, a spade used by a Scottish soldier at Magersfontein and the boots of a Boer soldier who died at Spion Kop tell of the severity of some of the famous battles.

The book follows the course of the war but also highlights specific themes, such as British and Boer weaponry, medical services and POW camps, as well as major figures on both sides.

The text is interspersed with striking historical images from the museum’s photographic collection. More than 200 additional objects have been included to help tell the story of a conflict that left an indelible mark on the South African landscape.

The photographs and accompanying information in this book are extremely well organized and presented. This was a learning experience that will stick with me.

... this book is recommended to those interested in the War, primarily for the extensive and unusual illustrations, many of which will be novel to members of the Society. The book’s Introduction alludes to the difficulty encountered in curating the number of potential objects into the core 100 and the editor must be congratulated for his choice that results in a fascinating insight into the Boer side of the conflict.

"This book should be in the library of everyone with an interest in the Anglo-Boer War and if you only want one book covering the subject then this should be it! Highly recommended."

Telling the story of the Anglo-Boer war through 100 iconic objects, supplemented by an additional 150 other objects, including historical images, is a great idea. The objects, most of which are in the collection of the excellent War Museum of the Boer Republic in Bloemfontein, tell the bitter story of this conflict. With descriptions of battles and sieges, weapons, medical services, individuals, the guerrilla phase and what followed in the scorched earth policy are fascinating, if not heart-retching, to read. From hats to horses, balloons to blockhouses, Mausers to Metfords, Churchill to Conje, all give an enthralling, often personal, insight into this war. There is the tragic story of Jurgen Nieman told through the objects of his gravestone and blood stained clothing; a sword taken from a British soldier during the battle of Spionkop; an inkpot taken from Piet Cronje’s desk by a British soldier after Paardeberg and a fascinating story of how most of President Steyn’s dining set was returned by Lord Roberts.

I knew little or nothing of the Boer War, and this superb collection of artefacts has taught me so much. All of the items featured are from the War Museum of the Boer Republic, and each one is accompanied by a story and, where necessary, analysis. Absolutely enthralling, this is history as it really should be taught.

After reading this book, cover to cover, in 2 days, I felt that I had a real grasp of the reality of the 1899-1902 war which so shaped South Africa’s history. I now realise that my previous knowledge of the war was very sketchy.

The 100 iconic objects which are held in the War Museum of the Boer Republics, and 200 other objects, maps, and many photographs, are beautifully presented in this high quality book of 260 pages. The story of each object is told in short essay style by gifted, expert writers.

The book does not glorify the Anglo-Boer War. If anything, it is an anti-war treatise. It certainly has had a major impact on this reviewer.

The book, published by Frontline Books and based on the archive of the War Museum of the Boere Republics is a concentration of information and history, which brilliantly describes all the characters, places, stories of a war so far away but also so close to us . Recommended.

New Masterpiece for our library.

About The War Museum of the Boer Republics

The WAR MUSEUM OF THE BOER REPUBLICS in Bloemfontein is dedicated to the Anglo-Boer War or South African War, the biggest ever conflict on South African soil. The museum aims to provide an understanding of the background against which the war took place through its unique collection of artefacts, photos, weaponry and art.\r\n\r\nJOHAN VAN ZŸL is a historian and the manager of specialist services at the War Museum. He has co-written numerous in-house and trade publications.