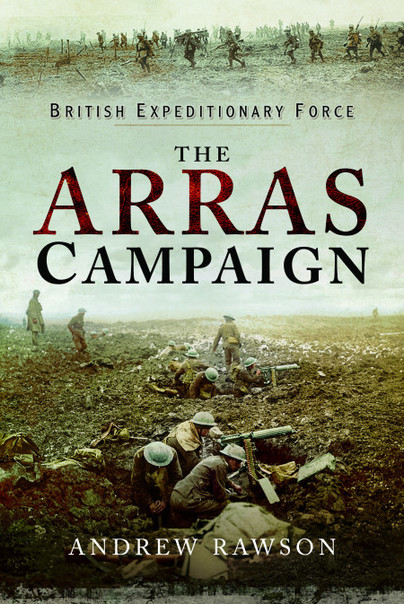 Add to Basket
You'll be £25.00 closer to your next £10.00 credit when you purchase The Arras Campaign. What's this?
+£4.50 UK Delivery or free UK delivery if order is over £35
(click here for international delivery rates)

This is an account of the British Expeditionary Force's actions during the spring of 1917. It begins with the Allied plans for the New Year and shows how they were undone by the German decision to withdraw to a pre-prepared defensive line. The story follows the cautious advance across devastated territory to the Hindenburg Line and the subsequent revision in Allied plans. The Arras offensive on 9 April resulted in the capture of Vimy Ridge by the Canadians and the longest advance by British troops since trench warfare began. But attempts to replicate the success at places like Oppy, Roeux, Monchy and Bullecourt ended in bloody failure. Each large battle and minor action is given equal treatment, giving a detailed insight into the most talked about side of the campaign, the British side. There are details on the reasoning behind each battle, the objectives and the tactics. There is discussion about how the infantry, the artillery, the cavalry, the engineers and Royal Flying Corps worked together. We see how they used new techniques or made costly mistakes during the attacks. Over sixty new maps chart the day by day progress of each battle and action. Together the narrative and maps provide an insight into the British Army's experience during this important campaign early in 1917. Where possible the men who made a difference are mentioned; those who led the attacks, those who faced the counter-attacks and those who were awarded the Victoria Cross. Discover the spring 1917 campaign experienced by the British Army and learn how its brave soldiers fought and died achieving their objectives.

The book does an excellent job of following the course of the offensive from day to day.

There were many campaigns and battles fought during WWI, some of which were overshadowed by the terrible consequences of others such as the Somme. This is one of those battles which general readers may not be completely familiar with. Nevertheless, Arras was an important battle of the war. The author does not waste time in getting to grips with the fundamentals of the campaign. After a very brief introduction, he goes straight into the planning and reasons behind the campaign and he keeps up the pace with an almost day by day account of the fighting. Everything about this book is satisfying, from the writing to the maps and the small selection of photographs. Indeed, between the text and the maps, the author presents a masterful work. This can be used for battlefield visits and as a reference work for wargamers.

Sometimes, especially for someone who is fresh to reading military history, working out the difference between Divisions and Brigades and attack positions, or how far they advance can be confusing when reading text. This book addresses a flaw in so many military books about Battles of the Western Front since understanding geography, distance and location is central. The reader quite of be reminded of this on each page. Many formidable books have been done on Western Front Battles, but having a separate map next to the text is still needed to work out location as you read through the text. This is not required with this work with the maps included. Working this, alongside headings such as '3rd Division, East of Monchy' or '14th Division, East of Guemappe', there are no issues working out where a particular Division was at a given time.

It is further complimented by a useful index and a conclusion as well as poignant photographs from the battle.

If you are looking for a book to instantly get to grips with the Arras Battlefield, then this is work by Rawson is a must.

Overall, a well-constructed narrative of this important mid war campaign.

Full of detail and does include the occasional anecdote, so if you want to really get to know what happened in the Spring of 1917, it can be highly recommended.