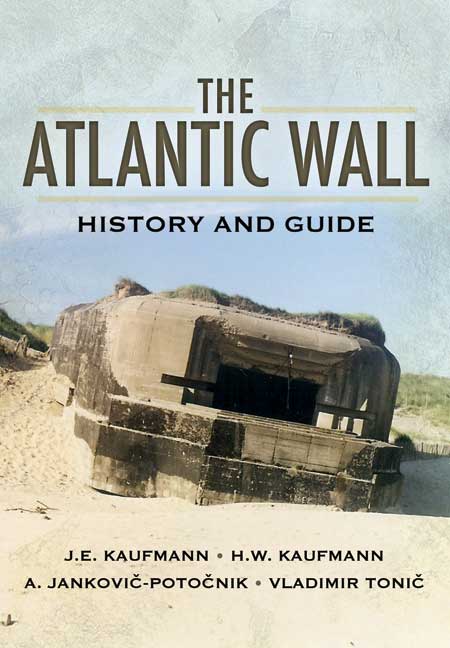 Click here for help on how to download our eBooks
Add to Basket
Add to Wishlist
You'll be £4.99 closer to your next £10.00 credit when you purchase The Atlantic Wall. What's this?
Need a currency converter? Check XE.com for live rates

Hitler's Atlantic Wall, the complex system of coastal fortifications that stretched from Norway to the Spanish border during the Second World War, was built to defend occupied Europe from Allied invasion. Many of its principal structures survive and can be visited today, and this book is an authoritative guide to them.

The wall, which was constructed on a massive scale between 1942 and 1944 by German engineers, forced labourers and troops, consisted of strongpoints, artillery casemates, bunkers, troop shelters, minefields, anti-tank and anti-boat obstacles. It also included the concrete U-boat and E-boat pens in the key ports and, behind the Channel coast, the V-weapon sites. This huge scheme of fortifications was one of the longest defensive lines in military history.

This history and guide takes the reader - and visitor - through the entire story of the fortifications from the fall of France to the Allied breakthrough and the defeat of the German armies in Normandy. This narrative puts the extensive remains that can be seen today in a fascinating historical context.

As a guide to some of the most impressive relics of the Second World War, this book will be essential reading and reference for any one who is interested in the history of fortifications, D-Day and the liberation of occupied Europe.

All in all, a useful and informative book.

I recommend all of them to everyone with an interest in the topics. Further, these latest two make wonderful additions, both in terms of their large chronologic coverage and their specific topic nations.

The Central States volume is of interest to me particularly in regard to its detailed discussion of the Czechoslovakian fortifications of the inter-war period (the 'Benes Line'), along with its presentation on the defence construction efforts of Axis Hungary in 1944. What jumped out at me from the Neutral States volume was, of course, the in-depth treatment given to the Swiss. I’m sure I’ll make good use of all those data in some future war-game designs.

The best single volume on what the wall was intended to do, how it came to be built, the many different (but standardized) bunkers and related facilities, and how it was all for naught. Well-illustrated. As with many previous Kaufmann books, the amount of information here is amazing. In short, add this book on the ultimate coastal defense system to your library. There is no better published guide covering the entire wall - in any language.

The Atlantic Wall was, as the authors aver, the longest gun-bearing fortification line in history, albeit not wholly continuous. And, like other lines of fortification in history, its effective life was brief, in fact barley more than a couple of years.

The book explores the strengths but also the many weaknesses of the wall, such as the multiplicity of different types of gun and ammunition, inadequate quantities and quality of manpower, poor infantry transport facilities and significant gaps in the defences.

As might be expected in a book written by the Kafumanns, well-known and respected authors in the field of c20th fortifications, the story of this briefly-lived but massive defence line is told in masterful detail. The text is enriched and complimented by the many drawings, maps and plans.

The authors have done a splendid job.

One of the best WW2 books of the year

It's not very often that a book leaves you feeling as if you have a total knowledge of its subject matter but "The Atlantic Wall - History and Guide" is one of them.

This is one of the best researched books of its kind and equally as well edited. The images and text are well laid out and the many diagrams and maps just add to the flow of the book. In many cases the maps and diagrams are the only way to fully understand the written explanation.

The St Nazaire Raid in April 1942 forced Hitler to realise that occupied Europe was vulnerable to attack from the air and sea. The Dieppe raid later made the Germans upgrade their plans for fortification.  Fortifications were to be built along the Dutch, Belgian and French coasts, these fortifications included pillboxes, mines, casemates, antitank (Belgium gates) and underwater obstacles, anti-aircraft guns, heavily fortified u-boat pens and miles of underground tunnels and supply bunkers.

Huge armies of slave labour were used to build the Atlantic wall fortifications using seemingly unending amounts of reinforced concrete. Many of these structures survive today and can be seen by visiting the area. Chapter 11 gives a full rundown on the museums and battlefield tour routes that are available to those that wish to visit.

The undertaking of writing and producing this book was vast but has been done so to the highest standards. The result is a credit to its writers and publishers.

This immense book actually takes on the feel of a lump of reinforced concrete from the bunkers it describes. Packed with information, beautiful drawings, maps and diagrams, it almost defies a standard review. I am not an architect and I haven’t visited a bare percentage of the locations covered in the book. So, I am not sure I can really do the authors justice. What I can say is this is a genuinely studious but entertaining work of great passion which sounds contradictory, but the point is the authors are enjoying themselves while not messing about.

This is not a place by place guide, but a detailed look at the way the Germans set about constructing defensive works in depth and also the manner in which they built specialised factory sites such as the aforementioned Watten. To do this the authors must have put in some serious legwork and the surveying they have done is excellent. I am genuinely gobsmacked at all of this. I cannot recommend this book highly enough to you.

I say it isn’t purely a guide, but the authors have included a section to show where we can visit things. Perhaps in a second edition or in a future work they could take it further.

I cannot recommend this book highly enough to you.

The Atlantic Wall is thoroughly researched, fully documented, well written, and brimming with detailed and easy to read maps, charts, tables and diagrams. In turn, the main narrative text both supports and is well supported by the illustrations and visual aids. In sum, the book covers all aspects of the Atlantic Wall – all of it, from the Norwegian Arctic down to Spain and along France’s Mediterranean coast – from the basis in strategic and operational theory for its creation, to its construction, its manning, and its eventual role in the campaigns and battles waged by the Anglo-Allies to get through it and into Germany proper. I heartily recommend this book to all with an interest in its topic.

More titles by A. Jankovic-Potocnik
eBook