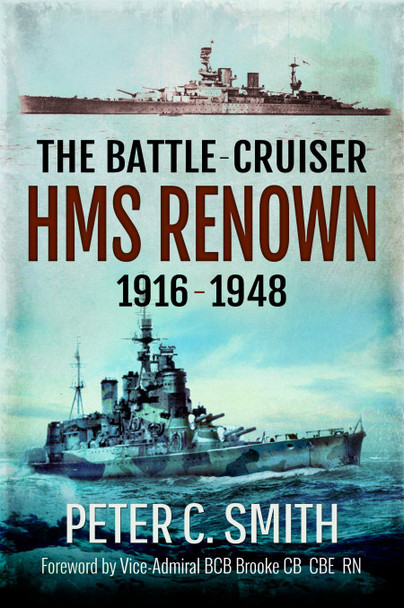 Click here for help on how to download our eBooks
Add to Basket
Add to Wishlist
You'll be £4.99 closer to your next £10.00 credit when you purchase The Battle-cruiser HMS Renown 1916-48. What's this?
Need a currency converter? Check XE.com for live rates

This is the story of the Royal Navy battle-cruiser HMS Renown, a famous ship with a long and distinguished operational career. Originally built for the First World War she subsequently served in the post-war fleet and took royalty around the world. Modernised just in time for World War Two, she re-joined the fleet in September, 1939 and for the first two years of the war her speed and heavy gun armament made her one of the most important ships of the fleet. She escorted the famous carrier Ark Royal for most of her illustrious career as flagship of Force 'H' in the Mediterranean and took part in many stirring battles and convoy actions. Later she covered Russian convoys in the Arctic before going out to the Indian Ocean where she took part in attacks on Japanese targets in the Indian Ocean. Her final duties included the meeting of King George VI and President Truman in 1945. A host of fresh detail coupled with eyewitness memoirs from former crew members make this an outstanding warship biography.

First published in 2008, the story of the RENOWN more than justifies a reprint. Described as a lucky ship, this is fortunate given her design and initial build. With Fisher’s desire for fast, heavy gunned ships, RENOWN’s design with 6x15” guns and 42 boilers giving her 31 knots met this aim. However, her armour was a different story. Described as fragile ships with puny armour – only 1 or 2 inches in places, her survival was definitely lucky. Although her armour was increased, she never had the opportunity to prove her value in the latter days of WWI.

his is a highly enjoyable read. The mix of technical descriptions with eyewitness accounts from all levels of her company is brilliant. With a service life of “strenuous and unfailing service”, she always lived up to her motto of “Hit Fast and Hit Hard”. This is a cracking read – highly recommended.

Ten years on with two reprints this is still an outstanding warship biography.

If you like a thorough, detailed history of a famous, long lived fighting ship, this volume will give you just what you're looking for. It also provides an insightful look at some of the Royal Navy's more interesting naval leaders, including Admirals Cunningham and Somerville. There are also several reference tables highlighting Renown's cited actions, her commanders, her previous namesake, and several profile illustrations showing her many modifications throughout her service life.

This is a successful book, giving a picture of life n a major warship, as well as a different view of some f the main naval actions of the Second World War.