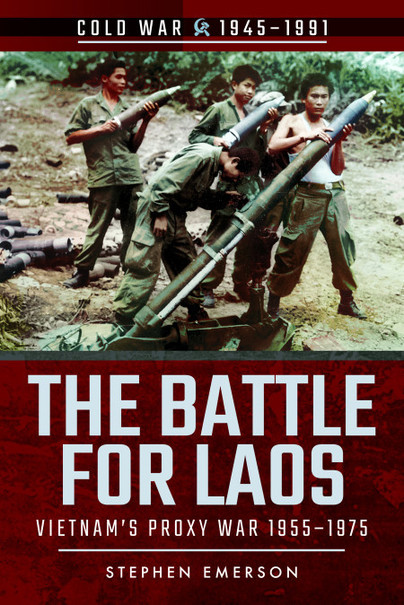 The Battle for Laos (Kindle)

Click here for help on how to download our eBooks
Add to Basket
Add to Wishlist
You'll be £4.99 closer to your next £10.00 credit when you purchase The Battle for Laos. What's this?
Need a currency converter? Check XE.com for live rates

By 1959 the newly independent Kingdom of Laos was being transformed into a Cold War battleground for global superpower competition, having been born out of the chaos following the French military defeat and withdrawal from Indochina in 1954. The country was soon engulfed in a rapidly evolving civil war as rival forces jockeyed for power and swelling foreign intervention further fueled the fighting. Adding even more fuel to the fire, “neutral” Laos’s geographic entanglement in the intensifying war in neighboring South Vietnam deepened in the early 1960s as Hanoi’s reliance on the Ho Chi Minh Trail for moving men and matérial through the southern Laotian panhandle grew exponentially and became a priority target of American interdiction efforts.

For almost twenty years, the fighting between the Western-supported Royal Lao government and the communist-supported Pathet Lao would rage across the plains, jungles, and mountaintops largely unseen by most of the world in this so-called “secret war.” Thousands on each side would die and many more would be displaced as the conflict on the ground ebbed and flowed from season to season and year to year. And in the skies above, American and Royal Laotian aircraft would rain down their deadly payloads, decimating large swaths of the countryside in pursuit of victory. Nearly 3 million tons of bombs would be dropped on Laotian territory between 1965 and 1973, leaving a deadly legacy of unexploded ordnance that lingers to this day. Thus, the battle for Laos is the story of entire communities and generations caught up in a war seemingly without end, one that pitted competing foreign interests and their proxies against each other, and one that was forever tied to Washington’s pursuit of victory in Vietnam.

A topic always hot and of great interest.

The Battle for Laos represents a major contribution to the historiography of the post-World War II conflict in Indochina. What distinguishes Emerson’s work from others on Laos is the granularity with which he presents each major combat engagement, supplemented with maps and photographs of combat units, and of transport and combat aircraft. As has been the case in his other works on Vietnam, Emerson changes his prose in describing military engagements, employing shorter sentences that tend to quicken the pace of the action and heighten the accompanying tension, making the reader an eyewitness to whatever unfolds. It is, a sad story by any measure, but documented and recounted by a writer steeped in his craft, with a gift to keeping his reader interested enough to keep the pages turning.

The Cold War series is developing into a unique and insightful study of a long and bitter conflict that was far from Cold in many parts of the Globe. This edition looks closely at the Battle For Laos and features many rare images through the body of the book and in a full colour photo-plate section – Very Highly Recommended.

For the Gamer/Modeller/Military enthusiast, for whom I think book/series was created- its a real boon. If you want to understand a Vietnam side theatre better- this is a great resource for it. There's a good bibliography if you want to go deeper- but for those who just want to be able to play/model a bit more than the central Vietnam story- this is a great entree. And as I said before the Colour picture are really good for the modeller with nice shots of the key types. A straight recommendation for the Vietnam era reader.

The story of entire communities and generations caught up in a war seemingly without an end.