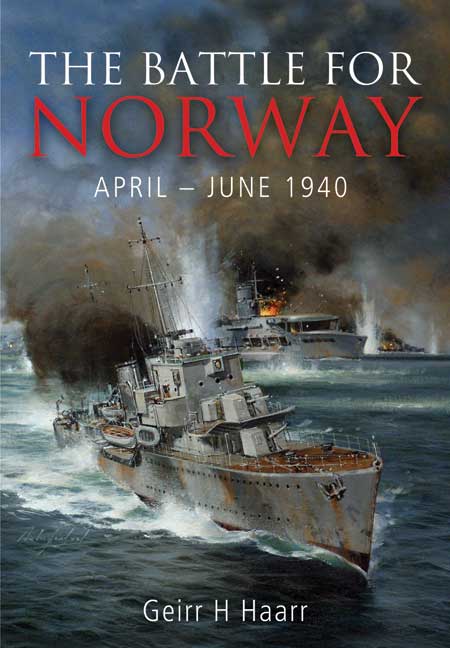 The Battle for Norway (Kindle)

Click here for help on how to download our eBooks
Add to Basket
Add to Wishlist
You'll be £9.00 closer to your next £10.00 credit when you purchase The Battle for Norway. What's this?
Need a currency converter? Check XE.com for live rates

This is the second book in a series of two, covering the events at sea during the German invasion of Norway in 1940, the first modern campaign in which sea, air and ground forces interacted decisively.

Part one covers the events at sea off southern and western Norway where Norwegian and British forces attempted to halt the German advance out of the invasion ports as well as the stream of supplies and reinforcements across the Skagerrak. The second part focuses on the British landings in Central Norway where the Royal Navy for the first time had its mastery challenged by air superiority from land-based aircraft. Part three covers the events in and around Narvik where Norwegian, British, French and Polish naval, air and land forces were engaged in the first combined amphibious landings of WW II. Part four sums up the events during the evacuation in June, in which the first carrier task force operations of the war, including the loss of the carrier Glorious, figure prominently.

As in the first volume, the narration shifts continuously between the strategic and operational issues, and the experiences of the officers and ratings living through the events. Extensive research and use of primary sources reveals the many sides of this war, some of which remain controversial to this day.

The research is outstanding.

For the first time printed in a single volume, this book despatches from the military and naval commanders. Focusing on the aircraft attacks on Kirkenes and Petsamo, the latter in Finland by aircraft from HMS Furious and HMS Victorious in August 1941, and the combined operations raid on the Lofoten Islands in March and Vaagso in December the same year.

There are great many interesting, fresh and well-captioned photographs. I must recommend both Geirr Haarr books as the definitive work on the invasion of Norway. He must be congratualated in setting out this very complex struggle in a logical, detailed and even-handed manner.

Those who have read Geirr Haarr's previous volume, which covered the German assault on Norway in April 1940, will need little introduction to this mastery sequel which describes subsequent events at sea and on land. This is a book about the projection of power from the sea, it's possibilities, strengths, weaknesses and the potential need for protracted operations after the initial, successful, amphibious assault.
The author writes with unique insight and gives due weight to Norwegian perspectives, absent in previous accounts, that show how Allied fears that 'fifth-columnists' or 'Quslings' were present in large numbers complicated the relationships between some British senior officers and their Norwegian counterparts.
This is an outstanding work of scholarship with significant contemporary relevance and a very readable account of how predecessors coped in the opening stages of an unexpected war that will be interest and value to a wide readership. I whole-heartedly recommend it.

Geirr H. Haarr's new two-volume work is a tremendous accomplishment. The Norwegian researcher strives for comprehensive coverage, his concise yet thorough treatment of the aerial dimension is especially noteworthy. This second volume paints on a broader canvas than the first, detailing the Allied expeditionary response and the naval, air and ground battles throughout the country. The volumes are very well illustrated with photographs, many published for the first time. Numerous appendices contain orders of battle, lists of ships and key personnel.

This is a definitive account of Germany's first and last seaborne invasion, codenamed Operation Weserubung. In this work, the author takes the reader through the events which followed, from the physical response of the allies to the completed occupation by Germany's armed forces, and the withdrawal of allies.

As with the first volume this is a meticulously researched book, with good use of Norwegian, British, French and German sources. The first hand accounts from naval vessels under heavy air attack are particularly impressive, sticking long in the mind.