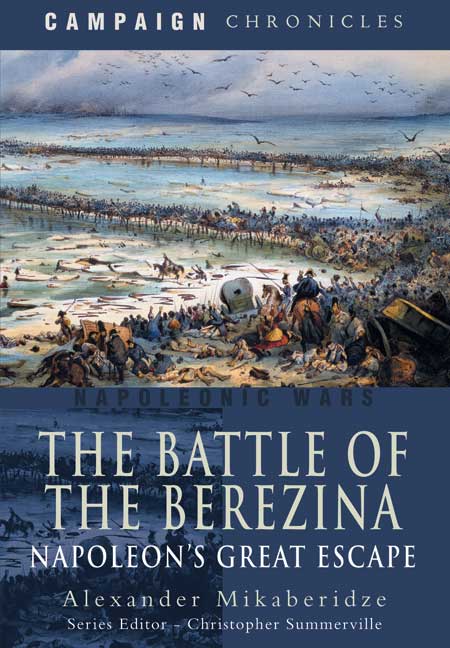 The Battle of the Berezina (Kindle)

Add to Basket
You'll be £4.99 closer to your next £10.00 credit when you purchase The Battle of the Berezina. What's this?
Need a currency converter? Check XE.com for live rates

In the winter of 1812, Napoleon's army retreated from Moscow under appalling conditions, hunted by three separate Russian armies, its chances of survival apparently nil. By late November Napoleon had reached the banks of the River Berezina - the last natural obstacle between his army and the safety of the Polish frontier. But instead of finding the river frozen solid enough to march his men across, an unseasonable thaw had turned the Berezina into an icy torrent. Having already ordered the burning of his bridging equipment, Napoleon's predicament was serious enough: but with the army of Admiral Chichagov holding the opposite bank, and those of Kutusov and Wittgenstein closing fast, it was critical. Only a miracle could save him ...

In a gripping narrative Alexander Mikaberidze describes how Napoleon rose from the pit of despair to the peak of his powers in order to achieve that miracle. Drawing on contemporary sources - letters, diaries, memoirs - he recreates one of the greatest escapes in military history - a story often half-told in general histories of the Russian campaign but never before fully explored.

As featured in bibliography for article 'La batalla de Krasnoi'

During Napoleon’s retreat from Moscow, his ever diminishing army was being pursued by three Russian armies. By late November 1812 the army had reached the banks of the River Berezina, the last natural obstacle between the French and the relative safety of Poland. Napoleon had been counting on the river being frozen, enabling to march what remained of his army across its surface, but unfortunately an unseasonal thaw had turned the river into an icy torrent. Having already ordered the burning of the army’s bridging equipment, with one Russian army under Chichagov facing him and two more commanded by Kutuzov and Wittgenstein closing in, Napoleon’s position was perilous in the extreme. The Emperor however rose to the task and achieved nothing short of a miracle to extricate his men. The French suffered heavy losses but managed to cross the river and thus avoid being trapped. The author’s narrative moves at a good pace, whilst providing much information on an often overlooked action. A title in the publisher’s ‘Campaign Chronicles’ series, this book was first published in 2010, included are four maps plus numerous monochrome illustrations, lists of notes and sources, a select bibliography and an index.

This book is a well written and researched account of some of the most dramatic, but often overlooked events of the 1812 campaign.

This is a great book, confirming Alexander Mikaberidze's position as one of today's leading Napoleonic historians. I would suggest both expert and the dilettante should buy this book.

Illustrated with photos and engravings from the author's collections, The Battle of Berezina is sure to satisfy all enthusiasts of Napoleonic history.