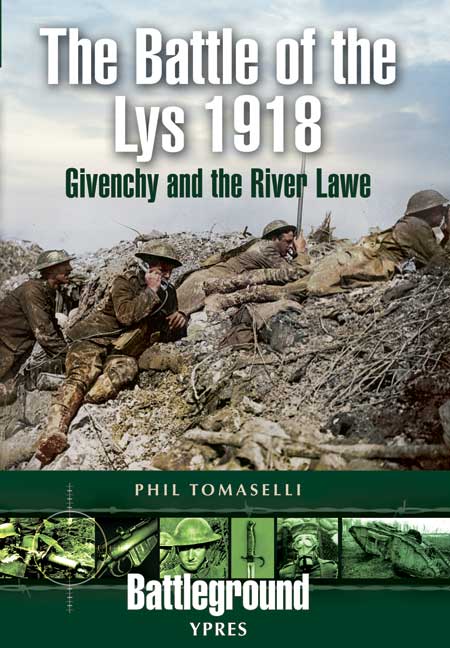 Givenchy and the River Lawe

Click here for help on how to download our eBooks
Add to Basket
Add to Wishlist
You'll be £4.99 closer to your next £10.00 credit when you purchase The Battle of the Lys 1918. What's this?
Need a currency converter? Check XE.com for live rates

The battles fought at Estaires and Givenchy, just south of Ypres, in April 1918 were critical episodes in the larger Battle of Lys which determined the outcome of the ultimate German offensive on the Western Front. The massive assault of Ludendorff's armies crashed against defences manned by the British and Portuguese. A series of intense attacks and counter-attacks followed, and the Germans were on verge of gaining the decisive breakthrough that both sides on the Western Front had struggled for since the onset of trench warfare in late 1914. A German success might well have forced the British to retreat from Ypres.

Phil Tomaselli's vivid account reconstructs events in the typical Battleground style. He describes the course of the fighting in close detail, using eyewitness accounts, official records, photographs and maps, and he provides walking and driving tours of the battlefield and of the monuments and cemeteries associated with it.

The Battleground Europe series of battlefield guides from publishers Pen and Sword are the benchmark which all other guides should aspire to.

Another in the excellent Battleground series, this time covering the Battle of the Lys in 1918. Each chapter relates the events and offers an insight into the actions of the various battalions engaged, as well as including extracts from personal accounts (letters, diaries etc). The author describes the course of the fighting in close detail and, together with the official reports, eyewitness accounts, maps and photographs, gives the reader a real sense and understanding of what happened on this part of the front during the great German offensive in Speing of 1918.

I can recommend this highly readable book as both useful and informative for the armchair reader and battlefield enthusiast alike.

This book differs from the other entries I've read in this series, with more emphasis on an account of the fighting and a smaller section of battlefield tours. That format works well here - the battle was a complex one, but fought over a comparatively small area. It was essentially a fighting retreat, with the British and their allies pulling back at no more than the speed of a marching man.The account of the fighting is clear and well organized. Plenty of eyewitness accounts, maps and photographs are used to support the text, and there is a good introduction as well as a brief account of the rest of the battle.

A massive assault by German forces against British and Portuguese defences in Flanders came close to giving Germany a decisive breakthrough. In the end they were pushed back, but the battle killed 120,000 men. Tomaselli provides expert analysis, photos, maps and diagrams.

The Givenchy area and the events that occurred there during the Second World War were something left untouched by many historians and information regarding what happened was few and far between. The Battle of the Lys however fills in this most important gap greatly and details everything from the three days that opened the southern sector of the battle of the Lys to the second German offensive of 1918. With chapters focusing on the 'Troops and their Dispositions', 'Defence the Lawe Crossings' and the 'Fall of Vielle Chapelle', the book's text flows freely and is strengthened by the inclusion of significant maps of key areas and intriguing images of some of the soldiers themselves. All of these things combine to reveal a book that thrills and informs and will provide the much needed facts about such and important period.

There can be few readers of this website who will be unfamiliar with the Battleground Europe format of this book: a hand-sized paperback, giving a summary history of a battle, well illustrated with maps and photographs and with guidance for travelling the area today. "The Battle of the Lys 1918: Givenchy and the River Lawe" covers an important action that has received puzzlingly little coverage over the years. Given that my own "The Battle for Flanders: German defeat on the Lys 1918" was published shortly after this book, I read it with great enthusiam and (for once) detailed knowledge.

The actions covered by this volume concern in the main the defence of Givenchy by the 55th (West Lancashire) Division and the breaking of the 2nd Portuguese Division in the Neuve Chapelle area in the face of huge German assault on 9 April 1918. "Operation Georgette" was the second German attack of their spring 1918 offensive, and after a promising start it finally ground to a halt in the face of stiffening Allied opposition. In this instance it became a near-run thing with German troops reaching positions very close to the vital Hazebrouck railways and the main supply road to Ypres.

The stories of the two front line Allied Divisions could not be more different: one was well trained, had a solid defensive doctrine and did magnificently well; the other was over stretched, holding poor defences and with morale that could scarcely have been lower. It was against the poor Portuguese that the Germans assembled their main weight and it was in breaking through on that front (and that of 40th Division on the Portuguese left, which gets some but relatively little coverage due to the scope of this book) that the Lys was soon crossed and a most difficult situation arose for the British First and Second Armies. "The Battle of the Lys" covers the first three days of the battle in the area described very well, not only of the two Divisions but the units that moved up in support. It is a tale worth reading, and is well illustrated.

The battlefield touring section of the book is a brave effort for there is relatively little to see in terms of artefacts. The Lys is no Somme when it comes to memorials and cemeteries, and the landscape is uniformly flat. Nonetheless Phil Tomaselli picks out many of the sites worth seeing, explaining walks around Givenchy and the bridgeheads across the tiny River Lawe, and a driving tour of the 55th Divisional and some rear areas. For battlefield tourists looking for something else beyond the Somme and Ypres, the Lys offers opportunities and this book would not be a bad companion en route.

This book of The Battle of the Lys joins over 100 more titles published in the Battleground series. This book is like a guide and gives good information to people who are very interested in the Battle of the Lys, also giving much information to people who are looking to go visit it in France, because it has now become a place that tourist can come and see and pay respects to the battle that took place here and the lives that were lost here. Towards the end of the guide it has a tour section where it has a guided tour for people interested to visit it in France, showing landmarks and maps to follow so that you can see the majority and important parts of history that have happened in Givenchy.

This book covers the three days of the conflict with the german offensive from the southern sector of the battle of Lys, it explains that they expected an attack from the Germans but to what extent it was unknown, so it would have been a great effort to try and fight back. The book goes through the three day struggle of these men in the first world war, to try and regain the lost land and defence that the germans have now taken. The soldiers were on themselves, there was no tanks, the Royal Air Force barely intervened, so it was a test of endurance and morale to keep fighting and regain what was lost.

The first chapter goes into detail about the different armies and their dispositions, the British army and the Portuguese army, it shows the struggle that both these armies had and the tactics and techniques they were planning to over come these obstacles, particularly the Portuguese army who had been holding the centre of the front. This book goes through each day describing in detail what happened and how significant it was ranging form April 9th to April 12th of 1918, showing the tactics and aims of both sides such as the German's intentions to pass the river Lawe on the 10th April.

This book uses the advantages of photography, it uses a range of photographs and maps to really go into detail and give imagery to the reader so you can really picture the life of the solider, what his life was like and what his task was as a team to try and achieve a victory, it shows the training of the armies such as the Portuguese, like firing training. It also provides very useful maps and pictures of the battlefield, with arrows and markers placed to show the positions of the armies and where the forces were moving to, helping the reader get an idea of the force of the armies, and the struggle other sides would have defending against it.

This book would be a great by for someone who is fascinated in world war one history, because this gives great detail in infantry warfare and will keep the reader fascinated for hours. Phil Tomaselli has created a fantastic piece of work, giving such detail of warfare over such a little amount of time, he gives fascinating information and facts of the war, that makes The Battle of the Lys a very interesting topic.