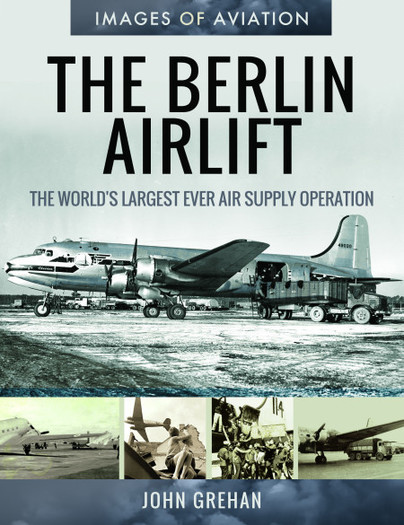 Click here for help on how to download our eBooks
Add to Basket
Add to Wishlist
You'll be £4.99 closer to your next £10.00 credit when you purchase The Berlin Airlift. What's this?
Need a currency converter? Check XE.com for live rates

The fate of the free world hung in the balance. Stalin’s Soviet Union sought to drive the Western democracies from Germany to continue the communist advance across Europe. The first step in Stalin’s scheme was to bring Berlin under Soviet control. Berlin was situated deep inside the Soviet-occupied region of the country, but the German capital had been divided into two halves, one of which was occupied by the Soviet Union, the other, in separate sectors, by Britain, France and the USA. Stalin decided to make the Allied hold on West Berlin untenable by shutting down all the overland routes used to keep the city supplied.

The choice faced by the Allies was a stark one – let Berlin fall, or risk war with the Soviets by breaking the Soviet stranglehold. In a remarkably visionary move, the Allies decided that they could keep Berlin supplied by flying over the Soviet blockade, thus avoiding armed conflict with the USSR.

On 26 June 1948, the Berlin Airlift began. Throughout the following thirteen months, more than 266,600 flights were undertaken by the men and aircraft from the US, France, Britain and across the Commonwealth, which delivered in excess of 2,223,000 tons of food, fuel and supplies in the greatest airlift in history.

The air-bridge eventually became so effective that more supplies were delivered to Berlin than had previously been shipped overland and Stalin saw that his bid to seize control of the German capital could never succeed. At one minute after midnight on 12 May 1949, the Soviet blockade was lifted, and the Soviet advance into Western Europe was brought to a shuddering halt.

The photos dominate the book, but the text is concise and informative, giving an almost day to day account of the airlift.

Another superb title in the brilliant Images of Aviation series. Stuffed with great images of the time and perfectly detailed information, superbly illustrating one of the first major international crises of the Cold War.

As an aviation enthusiast, this book fulfils my needs. There are images of most of my favourite aircraft and great stories to go along with them.

What a fabulous book! Aircrew sleeping on billiard tables, 10 tons of coal being unloaded by hand in 5 minutes, schoolchildren standing on rubble from air raids waving at their former enemies, flying boats delivering salt as they were built to withstand salt water, evacuating malnourished children out of Berlin, delivering millions of cigarettes to the allied forces within the city, risking aerial interception, bad weather, mechanical malfunction... building a new airfield in just a few months - it's all in here...

If you've got the slightest interest in the cold war, this is a must-buy. And it's fabulous to see so much British coverage in these pages - sometimes you would think the Berlin airlift was an entirely American affair, when the RAF had delivered a quarter of the tonnage delivered to the city and lost 18 aircrew in the process.

The book is packed full of fascinating photographs detailing the huge variety of aircraft involved in the airlift, each accompanied by detailed explanations and text. The book is a fitting tribute to the aircrew who lost their lives in this incredible operation.

This little book packs a lot of detail.

This book details the story of the Berlin Airlift in nine easy chapters, with references and further reading sections at the end.

It is image heavy, which makes it really appealing for lovers of these classic old piston aircraft. The author has found some incredible images which depict the Airlift in operation and shows the sheet scale of what was achieved.

As you read, the book takes you through the Berlin Airlift month-by-month, detailing how the operation developed, changed and ultimately succeeded, followed by the aftermath. A highly enjoyable read.

This offering from Pen and Sword as part of their Images of Aviation series is an exceptional book that really drew me into the subject matter; it filled in many holes in my knowledge of the events that occurred during the dark days after World War 2 as the Cold War really got started. The writing style of John Grehan is a first for me from a history standpoint as he has taken a subject and written about it in a way that made me want to read more, a very special skill.

in 9 chapters, John Grehan presents a good picture of the herculean feat of supplying the western zones of Berlin during the nigh-on year of blockade by the Soviet Union. Thought impossible, the task of utilizing the "Air Bridge" to Berlin was made a reality by heroic efforts of the RAF, USAF, USN and countless civilians. From 25 June 1948 until 12 May 1949, isolated and cut off West Berlin was held to ransom but from 9 operational airfields C-47/R5D Dakotas, C-54 Skymasters, C-82A Packets, Bristol Freighters, Avro Tudors, Avro Yorks, Handley Page Haltons, Handley Page Hastings, Avro Lancastrians, Short Sunderlands and C-97A Stratofreighters conducted operations into West Berlin ultimately providing over one and three-quarter million tons of succor to the three airfields inside the stricken city. There is a chronology of events supported by 171 photos, 2 maps and 2 drawings with discussion of individual operations, successes and tragedies befallen missions in this intense operation.

This book describes, with beautiful photos and captions full of information almost like a diary, this enormous humanitarian operation that marked the beginning of the Cold War and for which Berliners will always be grateful to the Western powers.

The mix of aircraft types is fascinating for the aircraft historian/enthusiast, such as the DC3, the Lancastrian (and early trials with air-to-air refuelling), the Avro York, C-54 Skymaster, C-82 Packet, the civilianised Halifax, the Halton, the early Hastings, and even a single example of an early C-97 Stratocruiser. Add the ground vehicles, the people and the work within Berlin and the huge variety of cargoes they had to carry, this is a marvellous historical reference in a good value book.

You will find a terrific text, it's extremely well produced, profusely illustrated from beginning to end!