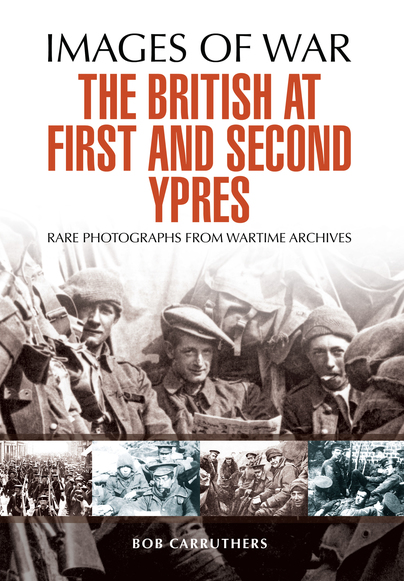 The British at First and Second Ypres (Kindle)

Click here for help on how to download our eBooks
Add to Basket
Add to Wishlist
You'll be £4.99 closer to your next £10.00 credit when you purchase The British at First and Second Ypres. What's this?
Need a currency converter? Check XE.com for live rates

This new volume in the long-running Images of War series features the actions of the British Army at Ypres from 1914-15. Rare photographs illustrating the optimistic men of the BEF in the act of mobilization and transport to France are contrasted with photographs from the battlefield during the opening phases of the campaign, which culminated in the four-year struggle for the Ypres salient. The photographs are accompanied by a fascinating text, featuring Bruce Bairnsfather's personal description of the conditions endured by the men in the rudimentary trenches on the Ypres salient during 1914-15 as the early phase of the battle for Ypres raged around them.

This book incorporates a wide range of photographic images encompassing the actions of the cavalry, infantry and artillery. Also featured are images, which depict the myriad activity behind the lines, dealing with German prisoners of war, the endless supply columns of the commissariat and the extraordinary efforts to provide proper medical care for the wounded.

Covering subjects such as recruitment, training, embarkation, the retreat from Mons, and the battles of First and Second Ypres, this slim volume draws on the relatively few photographs that are available of this period of the war to give a pictorial record of the early campaigns.

Some of the photos are quite well known but there are likely to be some new pictures for many readers. The pictures speak for themselves, with only limited captions to accompany them. Brief introductions to the chapters give some limited context, but this is not a comprehensive account of the battles, nor does it pretend to be.

The pictures are a mix of the staged and those grabbed moments depicting trench life and some of the action that took place. Picture quality is good considering the age of the photos and the no doubt small size of many of the originals. Most sobering is looking upon the unnamed faces and wondering the fate of those men; how many made it through to the end of the wear unscathed?

Pen and Sword’s ‘Images of War’ series is a fine idea, every picture telling a story, and this volume is no exception. Just the right amount of caption and text puts the photographs in context without overwhelming the overall impact. The contrast between the bright new arrivals of the British Expeditionary Force at Ypres in 1914 and the jaded veterans of later years is striking. The photos of activities behind the lines are also invaluable.

For this new addition to their Images of War series, Pen and Sword go back to the topic of WW1 and author Bob Carrruthers examines the topic of the BEF (British Expeditionary Force) in the first half of the war around the city of Ypres, among the most well known places to British troops during WW1. It is split over 5 chapters, tackling The BEF and the Road to Ypres: The Race to the Sea: The Ypres Salient: The First Battle of Ypres: and finally The Second Battle of Ypres, which took place in 1915. Each chapter is introduced by a page or two of text which provides the background for each set of photographs, all of which have helpful captions, some of these being the original captions that accompanied the photos when published at the time. It helps contribute to appreciating what was behind the sending of so many men to fight on the Western Front.

There are a host of photos in the book which show so many aspects of life, and death, for the British soldier in the opening years of the war. There are new arrivals marching to the front, still carrying their kit bags, while others show the wounded, evacuated to the rear after becoming casualties. In others we see the artillery, some vehicles in use as well as the barbed wire and men in the trenches. With so many men in the field, feeding them was a major task and even that is included, or while thinking of basic daily routines, men using the water from a shell crater to wash and shave. The mud and the devastation of the battlefield are all here and it gives a good broad picture of what life was like for the British troops in battle in the opening years of the war. No tanks yet of course, but there are images of troops practicing wearing the early gas masks that they had to use for real.

An interesting collection of images from the first two years of WWI and appropriate I think at this time of Remembrance parades to appreciate what it was like to have been part of the BEF at that time. For modellers, plenty of helpful references on uniforms and equipment as well as ideas for dioramas.