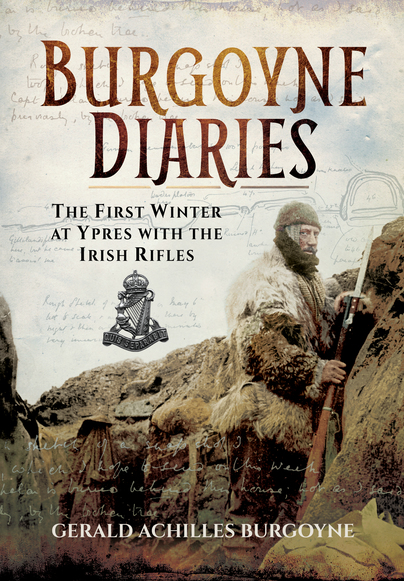 The First Winter at Ypres with the Royal Irish Rifles

Click here for help on how to download our eBooks
Add to Basket
Add to Wishlist
You'll be £4.99 closer to your next £10.00 credit when you purchase The Burgoyne Diaries. What's this?
Need a currency converter? Check XE.com for live rates

These are the diaries of Gerald Achilles Burgoyne, wrote from the trenches just south of Ypres while he was with the Royal Irish Rifles in the Great War.

The author’s daughter, Claudia Davison, was not even born when these diaries were originally written and was only 12-years-old when her father died in 1936 after being bombed by the Italian Air Force while he and his mules were conveying a Red Cross unit in Ethiopia.

Claudia found the diaries in a trunk full of personal effects when her mother died and, after showing them to a long-standing friend who loved the diaries, she sent them off to be published.

Despite conditions of all-pervading mud, bitter cold and wind, let alone the bursting shells and the ‘sipping’ bullet, Burgoyne dispassionately recorded and drew what he saw. These vivid accounts, written on pages of a notebook, were sent back to his wife almost daily. Each day is a gem of interest, from the very first entry in November 1914 to the last in May 1915.

The diaries end as abruptly as they begin. In May 1915 Burgoyne was wounded and sent back to England after a gruesome and abortive attack on the notorious Hill 60.

Complete with maps and sketches drawn by Burgoyne at the time, this book is essential reading for all Great War enthusiasts and those wishing to learn more about the key conflicts that occurred in 1914 and 1915.


The whole thing is very interesting and well worth reading, giving another insight into what life was really like during that war. From a personal point of view it was a bonus to learn the meaning of a couple of phrases which were used in my own family by those who had served at that time.

This book is compiled from the original diary entries of Gerald Achilles Burgoyne, an officer in the Royal Irish Rifles, written while serving in the front line trenches at Ypres during the Great War in 1914-1915. Originally printed in 1985, this edition is released for the centenary commemorations of the Great War. The book contains many maps, illustrations and sketches originally drawn by the author.

It was the author’s daughter Claudia that brought the diaries to the fore after she discovered them in an old trunk filled with her parent’s personal effects. This personal account written on notepaper while under great stress, and enemy barrages in his mud filled trench, were sent home almost daily to his wife back in England.

The book gives a real daily view of what life was like at the front lines of what was known as the ‘bloodiest war to end all wars’. While the cold weather and the modern weaponry of the 20th century took their toll on lives on both sides, Burgoyne kept the diary pages constant from November 1914 until their sudden stop in May 1915, when he was wounded and returned England.

Burgoyne is very outspoken about his personal opinions on the war effort, and of his men, whom he openly admits to hitting them to instil discipline, and naming them. This honest account is at times too ‘real’ to read as the author probably didn’t envisage they would be printed as a memoire some 70-years later.

Gerald Burgoyne survived the Great War, only to be killed in 1936 by the Italian Air Force while he mules were conveying a Red Cross Unit in Ethiopia. His daughter found these diaries and sent them off to be published.

It has to be said, reading this book, that Burgoyne is an extremely unlikable officer, particularly from the point of view of an Irish man. His contempt for the Irish Volunteer soldiers under his command is simply sickening, particularly when on considers the huge contribution the Irish made to the British army in World War One, something only now coming back into the light. Moreover, things like his obsessive hope that an unfortunate soldier caught sleeping on duty, or his delight at the bombing of Scarborough (thinking it would improve recruitment), show a frankly horrible man.

But, this is who he was, these were his thoughts and opinions, and they are valuable as they show how he really was, and the contempt of the officer class for others, a class the very war he was fighting would help sweep away.

On the positive side, his descriptions of the war are very valuable: they show it in its true horror and filth. A hard read in some ways then, but with the diary entries, maps and Burgoyne’s sketches, it is one of value in its own right.