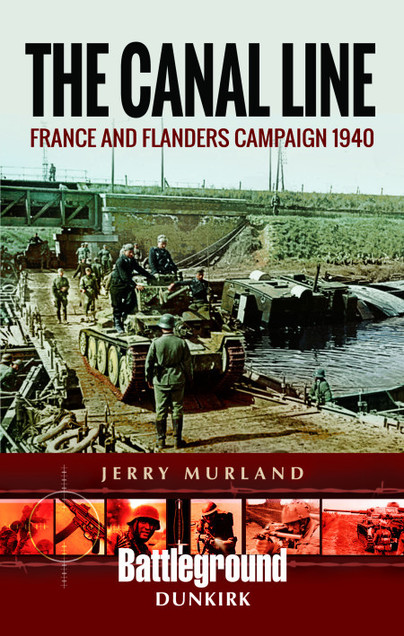 Click here for help on how to download our eBooks
Add to Basket
Add to Wishlist
You'll be £4.99 closer to your next £10.00 credit when you purchase The Canal Line. What's this?
Need a currency converter? Check XE.com for live rates

The network of canals stretching from the coast at Gravelines, through St-Omer, Béthune and La Bassée, follows the approximate boundary between Artois and Flanders and was, in 1940, the defensive line established on the western edge of the so-called Dunkerque Corridor designed by Lord Gort to provide an evacuation route to the channel coast. Even before events on the line of the Escaut line had concluded with yet another Allied withdrawal, Lord Gort was diverting units to bolster the Canal Line defenses

This is probably the first occasion that the fighting along the Canal Line has been looked at in detail; overlooked by the inevitable withdrawal towards the channel coast, the units deployed along the canal faced some of the stiffest fighting in the whole 1940 France and Flanders campaign. Whole battalions, particularly those in the 2nd Division, were sacrificed as units were thrown into the battle in an attempt to slow down the German advance. The book looks in some detail at the ad hoc nature of the Usherforce and Polforce units, the units of the independent 25 Brigade and the vicious fighting that enveloped the 2nd Division. Time is given also to the notorious massacre of the Royal Norfolks at Louis Creton’s farm near Le Paradis.

Material concerning the deployment of units along the Canal Line in 1940 has been found in a variety of sources, including regimental histories and unit war diaries. The author has been fortunate in being able to access a number of personal diaries and accounts from men serving with the independent 25 Brigade and the 2nd Division, which has, in some cases, added to and enhanced the actions taken by those units while deployed on the canal.

The book is illustrated by over a hundred contemporary and modern photographs and by five car tours and three walks, all of which give the tourist a greater access to the battlefield.

This combination battlefield history and guided tour book provides an excellent synopsis of the events surrounding the fighting in the low countries leading up to Dunkirk. The included driving and walking tours are very well laid out with photographs and detailed directions. The maps provided, as support to the narrative, are average. The publication is of high quality and an appropriate size for ‘pocket travel’. Overall, a recommended purchase for those wishing to follow the course of the battles with additional, in-depth, information that adds colour and personality to the experience.

Although officers were forbidden to keep diaries, a surprising number did, and these are used extensively together with many personal recollections. This gives the book a very different feel from an official campaign history; it is the story of individuals and small units doing their best against overwhelming odds.

A must for all those interested in the Second World War.

The book concludes with a series of guided tours to follow, by either car or on foot. Contemporary photos and maps abound, graves of interest in the various CWGC cemeteries are noted. This is a benchmark for how guides should be.

A most useful work for battlefield studies, war gamers or even general reading to understand a very complex campaign.

The latest in the outstanding and highly regarded Battleground Europe series of battlefield tour guides. The book includes details of four battlefield walks including the chilling site at Le Paradis where 61 men from the 2nd Bn Norfolks, and others, massacred in cold blood by the SS in May 1940. This well written guide highlights the bitter fighting in which the BEF became embroiled in 1940 which is often over shadowed by what is portrayed as the “miraculous Dunkirk evacuation”. The perfect guide for a weekend’s battlefield touring within a short distance of the Dunkirk ferry terminal!

Another fine addition to the series, and one which takes you to an area so easy to visit if you want to pop over through the Channel Tunnel, and an area so full of interesting places to visit for the Battlefield visitor. It's certainly one I will take with me next time we take a trip over to France.