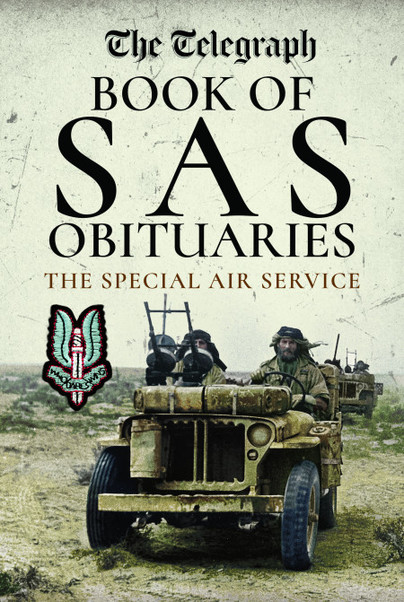 Preorder
You'll be £20.00 closer to your next £10.00 credit when you purchase The Daily Telegraph - Book of SAS Obituaries. What's this?
+£4.50 UK Delivery or free UK delivery if order is over £35
(click here for international delivery rates)

From its somewhat inauspicious early days in North Africa in 1941, the Special Air Service went on to become one of the most respected and elite military formations in the world. Its activities during the Second World War, and after, have become the stuff of legend and numerous books have been dedicated to the astonishing exploits of the men in its ranks.

No more so is the case then for Colonel Sir David Stirling, whose obituary understandably features in this book. The creator of the SAS, Stirling was nicknamed the ‘Phantom Major’ by the Germans for his remarkable exploits far behind their lines in the Western Desert. In the fifteen months before he was captured, he and his desert raiders destroyed aircraft, mined roads, derailed trains, fired petrol dumps, blew up ammunition depots, hi-jacked lorries and killed many times their own number. Rommel admitted that Stirling’s men caused more damage than any other British unit of equal strength.

In 1942 the SAS was given the status of a full regiment. Montgomery said of its creator: ‘The boy Stirling is quite mad. However, in war there is a place for mad people.’ Whilst Stirling was awarded a DSO in 1942 and was appointed OBE in 1946, he was once described as ‘one of the most under-decorated soldiers of the Second World War’.

Stirling himself designed the Regiment’s cap badge, which carries the world-famous motto, ‘Who Dares Wins’. These words not only summed up Stirling’s philosophy perfectly, but also that of many of the men who served in the regiment.

The individual members of the SAS have generally kept a low profile while serving with the regiment, which makes their obituaries so interesting – revealing much about the men whose actions are as relevant in the dangerous world of today as they have been throughout the decades since the Second World War.