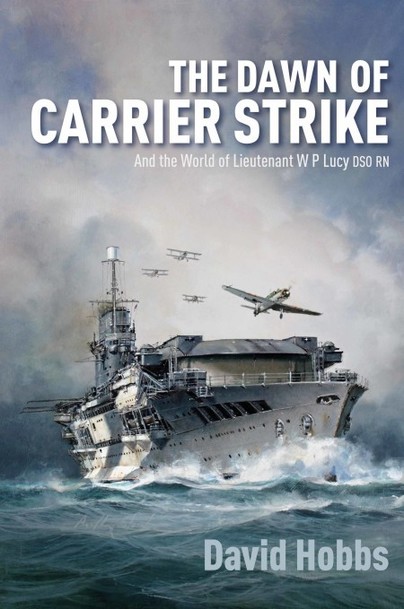 The Dawn of Carrier Strike (Hardback)

Add to Basket
Add to Wishlist
You'll be £35.00 closer to your next £10.00 credit when you purchase The Dawn of Carrier Strike. What's this?
+£4.50 UK Delivery or free UK delivery if order is over £35
(click here for international delivery rates)

Among all the celebrations of the RAF’s centenary, it was largely forgotten that the establishment of an independent air force came at a cost – and it was the Royal Navy that paid the price. In 1918 it had been pre-eminent in the technology and tactics of employing aircraft at sea, but once it lost control of its own air power, it struggled to make the RAF prioritise naval interests, in the process losing ground to the rival naval air forces of Japan and the United States.

This book documents that struggle through the cash-strapped 1920s and ’30s, culminating in the Navy regaining control of its aviation in 1937, but too late to properly prepare for the impending war. However, despite the lack of resources, British naval flying had made progress, especially in the advancement of carrier strike doctrine. These developments are neatly illustrated by the experiences of Lieutenant William Lucy, who was to become Britain’s first accredited air ‘ace’ of the war and to lead the world’s first successful dive-bombing of a major warship. Making extensive use of the family archive, this book also reproduces many previously unseen photographs from Lucy’s album, showing many aspects of life in the Fleet Air Arm up to the end of the Norway campaign.

Although it is beyond the scope of this book, in November 1940 the inter-war concentration on carrier strike was to be spectacularly vindicated by the air attack on the Italian fleet at Taranto – it inspired the Japanese to a far larger effort at Pearl Harbor the following year, but the Royal Navy had shown the way.

... For anyone interested in the Fleet Air Arm and its history, this is an excellent book, and is highly recommended.

For anyone interested in the Fleet Air Arm and its history, this is an excellent book. Highly recommended.

This is an exceptionally well considered and written book, that tells the initial stories of carrier strike.

This work brilliantly diverges from the norm.

This is a book for naval aviation enthusiasts, but there is sufficient information provided in the photos and captions to enable modellers to build most Royal Navy aircraft of that time.

"In conclusion, the author has successfully interwoven Lt Lucy’s career into the development of the RN’s air arm and its tactics during the inter-war and early war periods to produce a fascinating account of British naval aviation at a time of transition. Highly recommended."

All in all, The Dawn of Carrier Strike provides the most comprehensive and convincing exploration yet attempted of the formative years of British “force projection”, and is highly recommended.

The Aviation Historian, issue no.9 – reviewed by Matthew Willis

This is a fascinating account of a difficult time in the history of the Royal Navy, when it struggled to cope with the results of erroneous pre-war policies and found itself fighting an entirely unexpected type of war. The Norwegian campaign saw the Navy begin to learn from its early mistakes and successfully operate the first carrier strike group, but also make the sort of mistakes that led to the loss of the carrier Glorious. Lucy’s own career shows how significant simple luck could be – after surviving many dangerous missions, he was lost in a clash with a single bomber.

Liberally supplied with tables and photographs throughout (many of which I have never seen before), this excellent book has been written in a style that is eminently readable and makes compelling, dare I say essential, reading for the naval enthusiast. If you believe you already know most of what there is to know about this subject, then believe me – the chances are you don’t!

This is a significant contribution to the historiography of naval aviation.

Even though the book is concerned only with the period 1918 - 1940, this was an era of profound change, both rapid and tortoise-like in its development. David Hobbs analyses the tensions between the Royal Navy and the nascent Royal Air Force carefully and exposes the failures of policy caused by the lack of understanding on the part of the politicians of the meaning of air power. To what extent this was the result of the RAF feeling that it had to fight to maintain its status as an independent service is a question touched on, but not examined in depth, and, indeed, is an issue best explored elsewhere. Nevertheless, the author does the serious student of the evolution of naval air strategy and tactics a great service as he lays bare the errors made and their enduring consequences, lasting well into the Second World War.

As to be expected from this author the research is impeccable and the very able text is well-supported by a great selection of images.

The text is highly authoritative and in-depth and comes from one of the most respected authors in the field.