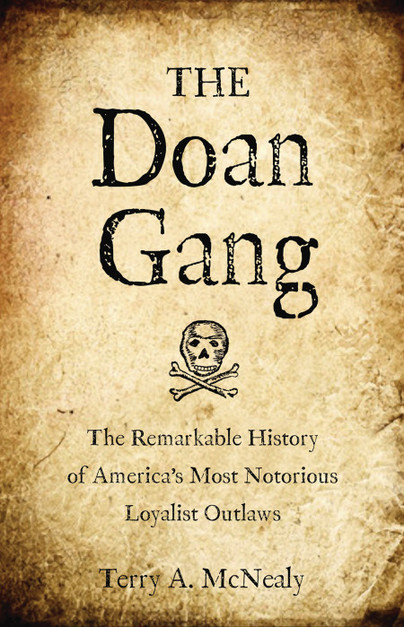 The Remarkable History of America’s Most Notorious Loyalist Outlaws

Preorder
Add to Wishlist
You'll be £20.00 closer to your next £10.00 credit when you purchase The Doan Gang. What's this?
+£4.50 UK Delivery or free UK delivery if order is over £40
(click here for international delivery rates)

The American Revolution was not a unanimously patriotic fight against British oppression, but a civil war in which nearly half the population in many colonies opposed the movement for independence. Loyalty to the British Crown took many forms, but no story better represents this conflict than that of the Doan Gang, a loose confederacy of men from various states who robbed tax collectors, militia payrolls, and county treasuries, and threatened to kidnap state officials in order to disrupt the governments that had replaced those loyal to the king. The core of the gang were members of the Doan family of Bucks County, Pennsylvania, lapsed members of the Quaker faith, a group whose pacifism irked the rebellious Whigs. No pacifists them- selves, the Doans’ first big exploit was the robbery of the Bucks County, Pennsylvania, treasury when it was flush with tax funds. For more than a decade—extending past the end of the revolution—the Doans threatened the govern- ments of Pennsylvania, New Jersey, and Maryland and ranged as far west as the Ohio Valley. In response, Pennsylvania authorities revived the medieval English legal process of outlawry, which allowed accused criminals to be executed without trial. While most of the gang escaped to Canada, several were caught and executed, while one of the leaders, Moses Doan, died in a spectacular shoot-out.

During the nineteenth century the Doans’ exploits became sensationalized, with the gang appearing as handsome highwaymen who carried out outrageous crimes in the name of the king. In The Doan Gang: The Remarkable History of America's Most Notorious Loyalist Outlaws, Terry

A. McNealy consults extensive primary sources to cut through the fictional accounts and present an even more compelling history of this extraordinary story from the American Revolution.

About Terry A. McNealy

TERRY A. MCNEALY was library director for the Bucks County Historical Society for more than twenty years and editor of many of its publications. He has written extensively on local history, including the book Bucks County: An Illustrated History.