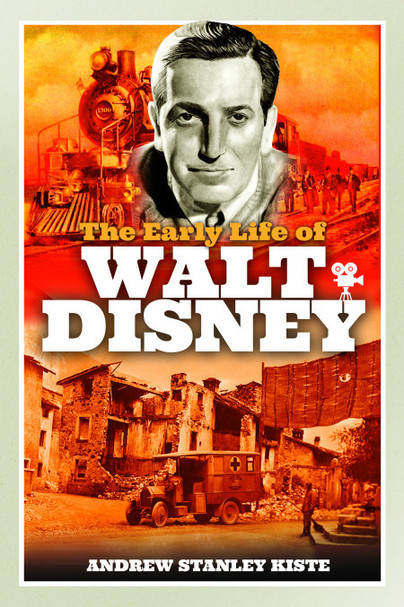 Click here for help on how to download our eBooks
Add to Basket
Add to Wishlist
You'll be £9.98 closer to your next £10.00 credit when you purchase The Early Life of Walt Disney. What's this?
Need a currency converter? Check XE.com for live rates

Enhanced for academia with the inclusion of a five page Bibliography and a three page Index, "The Early Life of Walt Disney" by Andrew Stanley Kiste is a 'must read' biography for the legions of Walt Disney fans.

As featured in: 'The Mouse that Saved Disney'

I have always had the utmost respect for Walt Disney as the pioneer who brought us superb cartoon films; this new book about his trials and tribulations along the road to success is a fascinating read...

A really good read I would think for anyone really. I highly recommend it.

The first time we drove our daughter to visit the college she ultimately attended, we passed by Marceline, MO on U.S. Route 36. My wife and I saw signs along the highway celebrating the town as the boyhood home of Walt Disney, and remarked that on one of our trips to visit our daughter we would need to make a side trip to see the Disney related attractions there. When our daughter graduated, we had still not take to time to stop there.

The town of Marceline figures largely in this book, which focuses on the life of Walt Disney from birth until he lost control of the Oswald the Rabbit character he created when he was in his 20s.


Disney had a somewhat antagonistic relationship with his father, who felt that pursuing art as a career did not fit into his religious worldview. The younger Disney got along well with his mother, siblings, and extended family, but the clashes with his father caused him to split away from his parents at a fairly early age. One of the things I learned from this book concerned Disney’s experiences driving Red Cross ambulances and other vehicles in France just after the end of World War I at the age of 16. Living in the Kansas City area, it was also interesting to read about several familiar locations in the city that have been associated with Disney’s life and career.

I gave The Early Life of Walt Disney five stars. I figure it’s always a good idea to read about the struggles of people who ultimately achieve great success, and Walt Disney definitely fits that description.

Who doesn't love Disney............So when this book came out I just wanted to learn more about Walt Disney he was great man!!!! The Early Life of Walt Disney by Andrew Kiste This was a very interesting book from the beginning till the end. It had great pictures and descriptions throughout this book.
It's a well written book and a must for any Disney fan.

'The Early Life of Walt Disney' is an interesting insight for any hardcore Disney fan. I'm excited to see the next installment.