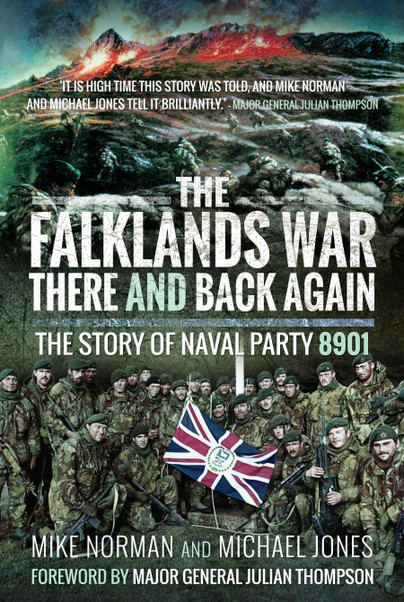 The Falklands War – There and Back Again (Kindle)

You'll be £4.99 closer to your next £10.00 credit when you purchase The Falklands War – There and Back Again. What's this?
Need a currency converter? Check XE.com for live rates

On 1 April 1982 Major Mike Norman, commander of Naval Party 8901, was looking forward to a peaceful year-long tour of duty on the Falkland Islands. But events turned out differently, for the next day the Argentinians invaded and he and his small Royal Marines garrison found themselves fighting for their lives.

They took up defensive positions in and around Government House and on the approaches to Stanley to protect the Governor, Rex Hunt, and delay the enemy’s advance. They were prepared to die executing these orders. After a desperate battle against vastly superior numbers, Hunt ordered them to lay down their arms. As the surrender took place, an Argentinian told a Marine: ‘The Islands are ours now’. The response was simple: ‘We will be back’. They were, and this is their story.

The Royal Marines of Naval Party 8901 volunteered to join the Task Force and, some seventy-five days after the invasion, the men who were forced to watch the raising of the Argentine flag over the Islands were able, in return, to proudly run up the Falklands flag once more at Government House.

Mike Norman and Michael Jones’s dramatic account draws upon Norman’s vivid recollections, the log book and action reports of the defence of Government House and Stanley, the testimony of Marines under Mike Norman’s command and recently released government archives. It is a powerful and moving tribute to men who confronted the Argentinian invaders and then fought to regain the Falklands.

A well told great story for anyone that has a great interest in the Falklands War and the Royal Marines and not forgetting the account of Navy Party 8901.

Containing eye witness accounts from those involved in this campaign, telling you the bravery, courage and sacrifice of those men who fought during the conflict.

Well written, descriptive and an entertaining read with supported maps and photographs and facts, highly recommended! You will be sure to re-read after a few months.

"I commend the book to those interested in gaining a more complete understanding of the Falklands campaign and to those who wish to gain a better understanding of leadership and courage in war at the tactical level."

On 1 April 1982 Major Mike Norman, commander of Naval Party 8901, was looking forward to a peaceful year-long tour of duty on the Falkland Islands. But the next day the Argentinians invaded and he and his small Royal Marines garrison found themselves fighting for their lives. They took up defensive positions in and around Government House and on the approaches to Stanley to protect the Governor and delay the enemy’s advance. Forced to surrender they famously returned to proudly run up the Falklands flag again. I was privileged to meet some of the Royal Marines who took part in the liberation of this remote South Atlantic archipelago and this book is a powerful and moving tribute to them.

Although the book contains many eye-witness accounts from those involved, the most rewarding chapters are those that highlight the years of government neglect of defence of the Islands prior to 1982, the lack of reliable intelligence at the time and the scant recognition Major Norman's marines received afterwards.
The book goes a long way to redressing the balance and deserves a wide readership.

It’s a great story and well told. Anyone with an interest in the Falklands should read it as it really sets the story straight, and shows us yet again the bravery and sacrifice shown during the conflict.

This memoir of inadequate intelligence, bureaucratic indecision, overwhelming invasion and often black humour is an enlightening read that should find its place on the bookshelves of all those with an interest in the Falklands, as well as those who wish to understand the fear and the fortitude of those who fight in close combat.

A forgotten part of the Falklands War. This book describes the early days of the war and how the marines were able to fight back again.

Really well written and recommended to anyone who wants an engaging book on this war.

Often unflinching, at different times surreal, funny, angry and bitter, this is a deeply poignant and compelling story that needs to be told. Norman and Jones have done NP 8901 proud.

Three part article series from Michael Jones: 'Defending the Falklands Part I: The Gathering Storm' as featured by

A first rate account and a very welcome addition to the still relatively small body of literature about the 1982 conflict - especially when it comes to the background and beginning of the Argentine occupation.

The Falklands conflictis a distant memory to most people, only those of us who were around at the time it happened will have a clear memory of the terror we felt at the prospect of another war. Mike Norman and Michael Jones's account doesn;t bring anything new to the history, but does put it into a different and very interesting perspective as they use first-hand accounts of the men who were stunned into fighting to defend themselves from the sudden Argentine invading forces.

Featured as BOOK OF THE MONTH

This book does the men of NP 8091 and the Royal Marines more generally a great service in telling the story as it should be told – with accuracy and with pride.

The Falklands War There and Back Again was a most enjoyable, entertaining read and I would heartily recommend it.

The authors have told the story very well and supported it with maps and photographs. There is a time line and extensive glossary. This is stirring stuff and a must read book.

I found this book an insightful and candid account of something that was going on the other side of the world when I was a teenager. This is a story of courage, and bravery of those who fought. I found the text to be well set out, with candid descriptions of what was happening, and some iconic photographs of the time.

To read this new account of the Naval Party and especially the detail of their initial defence to the invasion I found especially interesting and one I couldn't put down until I had finished the whole book. Definitely recommended.

An interesting account of NP 8901 who did so much at the start, and were there to finish the job off at the end.
Well written in easy prose telling the story of the Bootnecks who were on The Falklands for the greater part of the action. Explains why the response by H M Government was sometimes confused and the valid reasons why.
Imagine you have just started your new job, and 24 hours later an invasion is imminent.
As well as the gritty stuff spent time on the human aspect, including Royal Marines who had several drafts south, and some who had settled there permanently. Good collection of photos.
I will give it a re-read in a few months.

The book tells us how things actually were, at the sharpest of sharp ends, at a critical moment for Britain...A most useful and inspiring piece of history.

The purpose of the book is to put the facts to the public about the defence of the Falklands in the few hours after the Argentinians invaded until under orders from the Governor, the Royal Marines surrendered. This purpose is clearly achieved, as is the poor decision or no decision making by the MOD and FO in the build up to the attack. It reads like a thriller and moves at a fast pace through the anticipation of events and dealing with the attack. The attack from the media was also a threat post event but after some pusillanimous activities by government, eventually 8901 were allowed to get the record straight.

This is an excellent book that will suit those interested in the Falkland’s War, Royal Marines or just enjoy a darn good read.

It is high time this story was told, and Mike Norman and Michael Jones tell it brilliantly.

A compelling account of Naval Party 8901's courage and professionalism during the Falklands War.

"The Falklands War - There and Back Again" is a passionate and authoritative book which “sets the record straight” about the gallant defence of the Falkland Islands by Naval Party (NP) 8901, the resident Royal Marines’ garrison on the Falkland Islands at the time of the Argentine invasion on 2nd April 1982.

Despite their appearance in one of the most famous images of the war, the triumphant raising of the Falkland Islands’ flag when the islands were liberated, the role of NP8901 has been largely overlooked. Ricky Phillips’ “First Casualty” in 2017 was the first attempt to tell their story. Mike Norman takes us “behind the scenes”, in the planning involved in the detachment’s deployment, the defensive strategy overseen by Governor Rex Hunt and subsequent treatment by both the Ministry of Defence and Foreign Office. And return to the Falklands as J Company, 42 Commando.

With only 69 Marines and 10 Royal Naval Hydrographers at his disposal, Norman had to plan a defence in the face of overwhelming odds. Norman was seriously hindered by the Governor’s (understandable) wish to incur civilian casualties and clearly nails the lie that the Marines surrendered without a shot being fired. 37 years on, the sense of burning injustice at media stories shines through. As does his bitter disappointment that none of the gallantry displayed by his men was recognised. Personally I am not a fan of retrospective medal awards, and sadly the opportunity for recognition has passed. But the omission of NP8901 from the Falklands Honours list is as remarkable as it is unjust.
There is much in the book that will satisfy the casual reader and also those with a deep interest in the Falklands.

I have always regarded the Defence of Stanley, and also South Georgia, to have been among the finest engagements ever fought by the Royal Marines. This book only deepens my admiration for all those involved. There and Back Again is well researched, drawing on media reports, government document and the personal recollections of those involved. Recommended unreservedly.

Michael Jones is a fellow of the Royal Historical Society, a member of the British Commission for Military History and the author of twelve books ranging from the Middle Ages to the Second World War.

Major Mike Norman joined the Royal Marines in 1962 and served for thirty years, spending much of his time in commando units or training establishments. In 1982 he was appointed commanding officer of Naval Party 8901, the Royal Marines detachment which was stationed in the Falkland Islands when the Argentinians invaded. He organized the resistance until he was ordered to stop fighting, then returned to the UK. When 3 Commando Brigade landed at San Carlos on 21 May to retake the islands he commanded the newly formed J Company in 42 Commando and was in Stanley to see the Argentinian surrender.