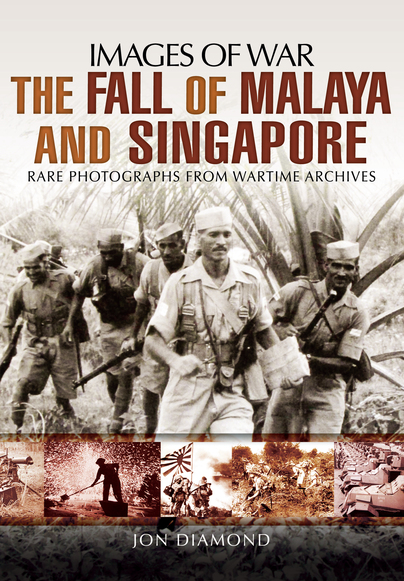 The Fall of Malaya and Singapore (Kindle)

WWII The Fall of Singapore Military

Click here for help on how to download our eBooks
Add to Basket
Add to Wishlist
You'll be £4.99 closer to your next £10.00 credit when you purchase The Fall of Malaya and Singapore. What's this?
Need a currency converter? Check XE.com for live rates

In just 10 weeks from 8 December 1941 to mid February 1942, British and Imperial forces were utterly defeated by the numerically inferior Japanese under General Yamashita.
British units fought hard on the Malayan mainland but the Japanese showed greater mobility, cunning and tactical superiority. Morale was badly affected by the loss of HMS Prince of Wales and Repulse to Japanese aircraft on 19 December as they sought out enemy shipping. Panic set in as military and civilians withdrew south to Singapore. Thought to be an impregnable fortress, its defences against land attacks were shockingly deficient. General Percival's leadership was at best uninspired and at worst incompetent.

Once the Allied troops withdrew to Singapore it was only a matter of time before surrender became inevitable. To make matters worse reinforcements arrived but only in time to be made POWs.

The whole catastrophe is brilliantly described in this highly illustrated book.

This photo essay produces a very effective picture of the defeat of British forces in Malaya and Singapore by the Japanese. This volume features the usual outstanding selection of photographs, but also provides a higher percentage of text. Highly recommended.

The powerful story of a tragedy illustrated with many previously unpublished photographs, this is a highly enlightening text on the Forgotten War.

Jon Diamond has assembled a selection of good quality photographs embedded in 5 chapters of text. The book runs to 208 pages and as ever Pen & Sword print to a good standard.

What I held here was a breath of fresh air and an author whose dedication and knowledge is clearly second to none... It is not often a book moves me to an emotional level or leaves me cross and angry but this title did both...Highly recommended!

Off to the Far East for this new Images of War book from Pen and Sword. At the outset of WW2 the Malay peninsula was still largely a collection of isolated centres of habitation, and covered by plantations and large areas of jungle. Difficult to traverse there were difficulties inherent in the landscape felt to be difficult for any attacker, and where at the southern tip was what the British thought of as the defensive fortress of Singapore.

What was to happen in the 10 weeks from 8 December 1941, the day after Pearl Harbour, through to mid-February 1942, the British and Commonwealth armies suffered one of their greatest defeats of the war. This new Images of War title by Job Diamond for Pen and Sword gives an interesting photographic look at the story that was to unfold, and one which included the other great shock to the Royal Navy and the British Government, the sinking of both the Prince of Wales and the Repulse.

After an initial Introduction to set the scene, the book splits into 5 chapters. The first examines the 'British Command Staff and Commonwealth Forces in Malaya and Singapore'. A mixture of units from the UK, India, Ghurkas and Australians along with largely outdated equipment. Lanchester armoured cars but no tanks and aircraft in the form of the Brewster Buffalo which was to be outclassed by Japanese aircraft. This is followed by chapter 2, 'The Japanese Invasion Plan and Assault'. Lt-General Tomoyuki Yamashita led the 25th Japanese Army, consisting of 3 first class infantry divisions were set to invade northern Malaya on 8 December 1941, the day after the shock that was Pearl Harbour. Despite being numerically inferior to the Commonwealth forces, their tactics, flexibility and ability to cope with the conditions of the terrain and the jungle saw them push the Allies back down the West coast of the Malay peninsula. The photos show them as they make their way south, able to push troops and equipment through the jungles, even using tanks which the British army had felt to be unsuitable for use in the area.

In chapter 3 we get to one of the greatest shocks of the war to date, as the battle-cruiser HMS Repulse and battleship HMS Prince of Wales were both attacked by Japanese torpedo bombers from their bases in Saigon, and sunk off the East coast of Malaya. It proved just how vulnerable large warships were to air attack if they did not have adequate cover. Pictures show them before and during the attack, along with the aircraft involved, as well as the survivors being picked up by their destroyer escort. Chapter 4 moves on to 'The British Response to the Malayan Invasion' but it didn't prove to be enough to stem the flow of the Japanese forces as they made their way south to Singapore. y chapter 5 we get to the 'Defence of Singapore' when it turned out the great fortress wasn't sufficiently protected against attack from inland, rather than the sea. With columns of smoke over the city the Japanese moved in and with a clever bluff, the inferior number of Japanese attackers ended up taking some 120,000 commonwealth troops as Prisoners of War from the campaign.

The book ends with an epilogue giving the end to the story, referencing the atrocities committed by Japanese forces after the Allied surrender, and on to the final surrender of the Japanese forces in Singapore in 1945 when they were finally held accountable for their deeds. It contains an interesting set of well captioned archive photos showing a period that was among the darkest days for the British Commonwealth during WW2.