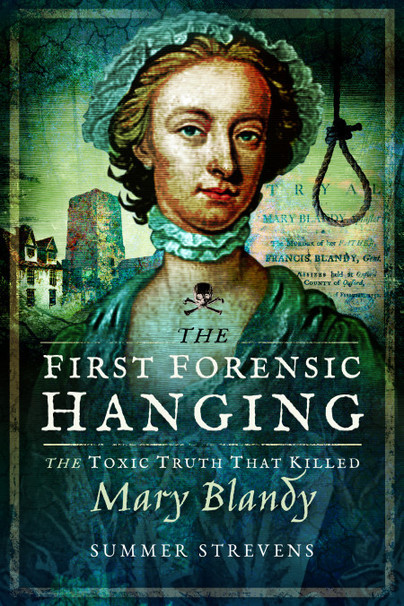 Add to Basket
Add to Wishlist
You'll be £7.79 closer to your next £10.00 credit when you purchase The First Forensic Hanging. What's this?
+£4.50 UK Delivery or free UK delivery if order is over £35
(click here for international delivery rates)

‘For the sake of decency, gentlemen, don't hang me high.’ This was the last request of modest murderess Mary Blandy, who was hanged for poisoning her father in 1752. Concerned that the young men in the crowd who had thronged to see her execution might look up her skirts as she was ‘turned off’ by the hangman, this last nod to propriety might appear farcical in one who was about to meet her maker. Yet this was just another aspect of a case which attracted so much public attention in its day that some determined spectators even went to the lengths of climbing through the courtroom windows to get a glimpse of Mary while on trial. Indeed her case remained newsworthy for the best part of 1752, for months garnering endless scrutiny and mixed reaction in the popular press.

Opinions are certainly still divided on the matter of Mary’s ‘intention’ in the poisoning of her father, and the extent to which her coercive lover, Captain William Cranstoun, was responsible for this murder by proxy. Yet Mary Blandy’s trial was also notable in that it was the first time that detailed medical evidence had been presented in a court of law on a charge of murder by poisoning, and the first time that any court had accepted toxicological evidence in an arsenic poisoning case. The forensic legacy of the acceptance of Dr Anthony Addington’s application of chemistry to a criminal investigation is another compelling aspect of The First Forensic Hanging.

The author does really well at bringing the case to live.

The First Forensic Hanging is a straightforward retelling of this famous case. Strevens deftly handles the evidence and provides useful context on Mary Blandy’s world. Her writing is quite engaging and Strevens has a knack for picking out the telling details, though she might have been bolder with her verdict.

It was a pleasure to read. I adore a non -fiction that reads like a work of fiction, and this one flows very well.

A short book (125 pages + 27 of bibliography and index) covering the life and death of Mary Blandy. Whether through ignorance and induced by her fiance William Cranstoun, or knowingly, Mary fed her father Francis arsenic in his tea and gruel, killing him painfully and slowly over three months in 1751. Several servants were also taken ill, two with long-term effects, as a result of eating or drinking poisoned leftovers. It was servants who helped bring about her arrest, however, saving the deadly gruel and a packet of mysterious powders thrown into the kitchen fire.

She was hanged for Francis’ murder after the jury decided she’d intended to kill him, although she vehemently claimed that until after the poison took effect she believed she had fed him a ‘love philtre’ sent by her fiance Captain William Cranstoun, to sweeten her father towards the Captain. Captain Cranstoun was impecunious and clearly after Mary Blandy’s rumoured £10,000 marriage portion, he was also already married and had a daughter.

It was the first case in which medical men were expert witnesses at a trial, and although Dr. Anthony Addington’s analysis wasn’t brilliant and certainly wouldn’t hold up today, it was the best they had at the time (no Marsh test for another 80 years) and the beginning of medical jurisprudence in Britain.

Strevens does a good job of bringing this case to life, using the many, many contemporary documents (pamphlets published during her imprisonment and for at least a year after her death, including one written by Mary, and another by Cranstoun) and exploring the consequences for medical jurisprudence and the social context of this murder, as well as imagining what would have happened had it taken place today.

I would thoroughly recommend this book to anyone interested in Henley’s history or the story of Mary Blandy, whether you know or think you know the facts, I think there is something riveting for all readers. Whether Mary Blandy was indeed a callous killer or a victim to her infamous suitor Captain Craunston is the ultimate conundrum, still disputed to this day, however this book contains a multitude of unbiased fact, testimony and information for the reader to come to their own conclusion.

The execution of Mary Blandy

The execution of Mary Blandy took place on 6 April 1752 who was accused of poisoning her father with arsenic. Her last request was ‘For the sake of decency, gentlemen, don’t hang me high’, out of concern that young men in the crowd would look up her skirts