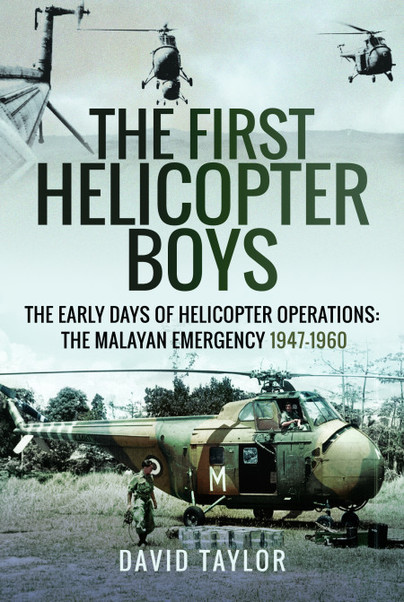 Click here for help on how to download our eBooks
Add to Basket
Add to Wishlist
You'll be £4.99 closer to your next £10.00 credit when you purchase The First Helicopter Boys. What's this?
Need a currency converter? Check XE.com for live rates

The book is pleasant both for the light it sheds on the first helicopter operations, and for the use of the first, defective, pioneering but very useful helicopters, and for the stories of two wars, especially that of the forgotten and distant "Malayan Emergency". Two campaigns which were successful for the British Army and which greatly helped those populations. The book is thus a little gem full of amusing anecdotes, war stories and "aerial" camaraderie that cannot fail to amuse and entertain any reader.

A fascinating insight into the early days of helicopter development and its use in the challenging terrain of Malaysia/Indonesia. Through the words of personnel from the time and David’s superb writing, you get a real sense of the issues the early machines had, and the resourcefulness used in a Jungle situation.

I’m not sure some of the ways these machines were maintained in the Jungle would be allowed today. As an example, changing a wheel while the pilot maintains a steady hover!

The squadrons in Malaya were very much the pioneers of the helicopter in British service, and author David Taylor tells their fascinating tale very well.

This was a largely-forgotten conflict, during which rotary-wing aircraft matured from being of mostly novelty value to the essential adjunct to a huge variety of military operations. David Taylor has provided a splendid insight into those far-off times.

Reviewed by Malcolm Smith, Society of Friends of the Fleet Air Arm Museum