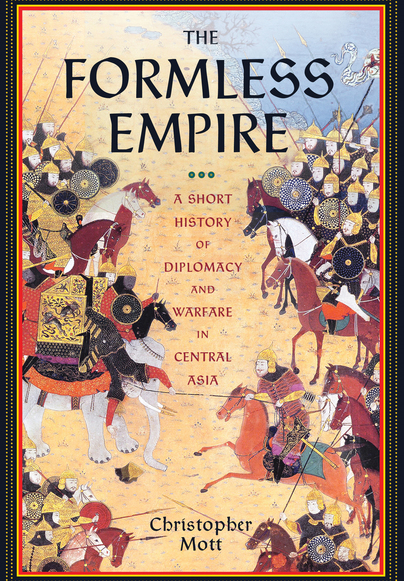 A Short History of Diplomacy and Warfare in Central Asia

Add to Basket
Add to Wishlist
You'll be £19.99 closer to your next £10.00 credit when you purchase The Formless Empire. What's this?
+£4.50 UK Delivery or free UK delivery if order is over £35
(click here for international delivery rates)

Central Asia, a vast region extending from eastern Russia and across Kazakhstan, Uzbekistan, Tukmenistan, Afghanistan, Tajikistan, Kyrgystan, Mongolia, and western
China, has its own tradition of foreign policy rooted in the ancient nomadic culture of many of its peoples as well as the region's distinctive geography. From the thundering hooves of Mongol or Cossack cavalry across the steppes to the clanking of tanks on parade in Moscow or Beijing, elements of this system still cast a shadow on the region at the heart of Earth's largest continent.

By tracing the evolution of Central Asian warfare and diplomacy through a series of historical examples, ranging from the ancient Xiongnu people and medieval Mongol
Empire to the fall of the Soviet Union, historian Christopher Mott argues that the original system of informal relationships, indirect rule, and rapid military movement
did not entirely fade from the region with the eclipse of the nomadic powers during the Middle Ages. In fact, many states like China, Iran, and Russia had already been
influenced by nomadic people, and in so doing adapted their own diplomatic and military policies accordingly.

The Formless Empire: A Short History of Diplomacy and Warfare in Central Asia is an engaging study of the nature of non-Western imperialism and great-power strategy. In addition, the book demonstrates that regional histories can show us the variety of political possibilities in the past and how they were adapted to changing circumstances—a point made even more important by the rapid changes facing global security with the rise of ISIS and other new forms of empire building.

The history is interesting and covers everything that I was looking for. It expands on a region that has a long and often tumultuous story with colourful characters and powerful empires vying for control, with varying levels of success. Starting before the Mongols and coming right through to the present, the book gives a thorough grounding in the development of various empires as they rose and fell in the Central Asian area. There is a lot of important history in here that, certainly a western reader, will find new and fascinating.