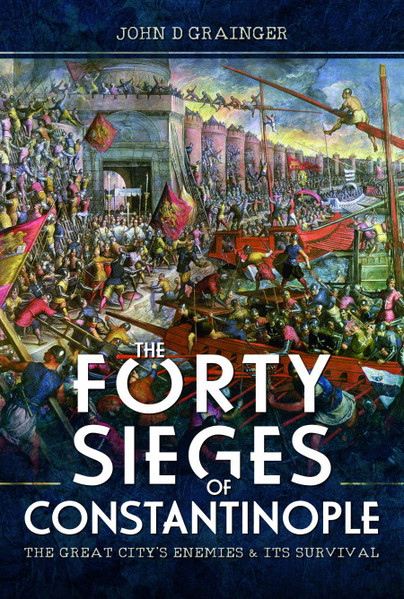 The Forty Sieges of Constantinople (Kindle)

The Great City's Enemies and Its Survival

Click here for help on how to download our eBooks
Add to Basket
Add to Wishlist
You'll be £9.98 closer to your next £10.00 credit when you purchase The Forty Sieges of Constantinople. What's this?
Need a currency converter? Check XE.com for live rates

The great city of Byzantion/Constantinople/Istanbul stands on a commanding cape overlooking a busy waterway. It has been the target of repeated attempts to capture it for the past two and a half millennia. Most of these attacks failed, but some did so in spectacular fashion, such as the great Arab sieges. The inhabitants fought hard in almost every siege, with the result that when the city was captured it was also destroyed, or at least suffered a hideous sack. Almost every nation between the Atlantic and the Steppes of Asia have made attempts to capture the city, some repeatedly but only a few - a Roman emperor, the Crusaders, the Turks - have succeeded. And there is no sign that some have given up the hope of taking it - the last sieges were just before and then during the Great War, by the Bulgars, and then by the Allies, who got no closer than Gallipoli, but the city had to submit to enemy occupation when the empire it ruled collapsed. It is still surrounded by envious neighbours, who wish to control it. The city has been besieged forty times, and has been captured on three or four occasions; it cannot be said to be safe yet. It is still 'The City of the World's Desire'.

"The Forty Sieges of Constantinople: The Great City and its Survival" is a new book by John D. Grainger, to be published by Pen and Sword. I am reviewing this text based on an ARC graciously provided to me by the publisher. To begin with, it is worth noting that the book delivers on the promise it in its title, unlike any number of books I have recently encountered. It is both well documented and well written. One might quibble with the authors rather flexible definition of "sieges," but once you are really into the heart of the book, you quickly see why. Constantinople, New Rome, Byzantium or Istanbul, the city's history, largely thanks to its location at a natural kind of crossroads between the East and the West, is a violent one that demonstrates many of the features of evolving warfare, particularly in the medieval and early modern period. This reason alone makes the read well worthwhile, but there is a great deal more on offer as the author skillfully negotiates the rather byzantine history of this region of the world (sorry, couldn't resist it) with authority and a clear understanding of his source materials and both their virtues and shortcomings. He covers the existence of human settlement fairly comprehensively (to the extent that is possible), so whatever period of the city's history you may already feel some knowledge of, you are certain to find other jewels to attract your attention as it is carefully placed in a context going back well before the Roman Empire to the early 20th century. Context is a wonderful thing! I recommend this book to anyone with an interest in todays world in the Middle East or simply seeking to better understand our collective past.