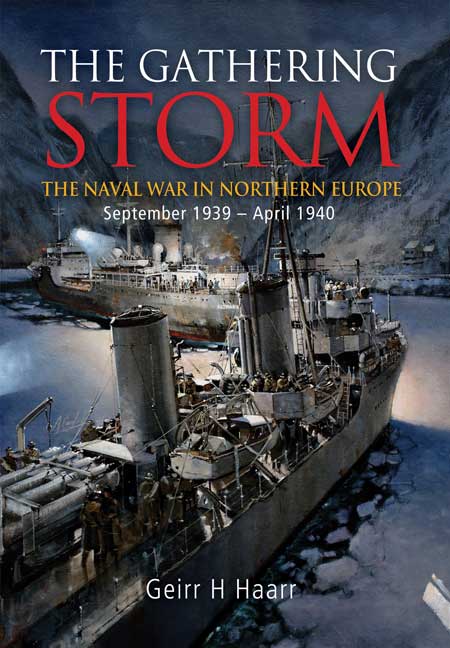 Click here for help on how to download our eBooks
Add to Basket
Add to Wishlist
You'll be £14.00 closer to your next £10.00 credit when you purchase The Gathering Storm. What's this?
Need a currency converter? Check XE.com for live rates

The term 'the phony war' is often applied to the first months of the Second World War, a term suggesting inaction or passivity. That may have been the perception of the war on land, but at sea it was very different. This new book is a superb survey of the fierce naval struggles, from 1939 up to the invasion of the Norway in April 1940.

The author begins the book with the sinking of the German fleet at Scapa Flow in 1919 and then covers the rebuilding of the Kriegsmarine and parallel developments in the Royal Navy, and summarises relevant advances in European navies. The main part of the book then describes the actions at sea starting with the fall of Poland. There is a complex, intertwined narrative that follows. The sinking of Courageous, the German mining of the British East Coast, the Northern Patrol, the sinking of Rawalpindi, small ship operations in the North Sea and German Bight, the Altmark incident are all covered. Further afield the author deals with the German surface raiders and looks at the early stages of the submarine war in the Atlantic.

As with his previous books, Geirr Haarr has researched extensively in German, British, and other archives, and the work is intended to paint a balanced and detailed picture of this significant period of the war when the opposing naval forces were adapting to a form of naval warfare quite different to that experienced in WWI.

...the author has presented an excellent overview of naval warfare during the first eight months of WW2.

This is a highly recommended addition to Geirr Haarr's stable of Seaforth titles.

Haar presents a balanced and well researched picture of the opening months of the naval conflict during World War Two. He presents convincing arguments without bias. A vast collection of photographs and other archival material help complete the image Haar creates. Information in the appendices is thoroughly researched and supports Haar's arguments. Although a great deal of detail is presented, Haar does not lose sight of the larger argument and constantly references back to his key arguments.

An insightful account of an aspect of the war at sea that has been glossed over at best...As a Norwegian, Haarr's treatment of the Altmark affair provides the reader with the Norwegian side of the story...Haarr should be congratulated on this well-constructed history. Although many aspects of the war at sea during the period he covers is well known to Second World War historians, the appendices alone are themselves worth the price of the book. They reflect the diligence the author placed on his reesearch.

A well researched and thoughtful work with the additional merit that it is written from a Norwegian perspective by someone who does not see things in the way that a British or German writer might.
A fresh new look at a period of the Second World War that is often overshadowed by later events and adds positively to the bibliography of the war. A very readable book

Using primary sources such as formal reports, as well as private material and memoirs, the author paints a picture of the war at sea during these early months of the conflict. The result is a detailed account of a significant but often neglected period of the war at sea.

A top-of-the-line examination of operations in north European waters during the first eight months of the war. This is by far the best work on that subject, with a full range of strategic insights and unexpected details. Highly recommended.

Profusely illustrated with masses of photographs and maps throughout, this outstanding book completes the trilogy and forms a splendid reference source on this important campaign. Most strongly recommended.

An outstanding work of naval history which provides a definitive account of the 'phoney war' at sea...it is probably destined to be recognised as the most important naval work of 2013. Excellent and very highly recommended.

By his meticulous research, with supportive notes and appendices, Geirr Haarr gives us what may well be a definitive account of the beginning of the naval war in Northern Europe.