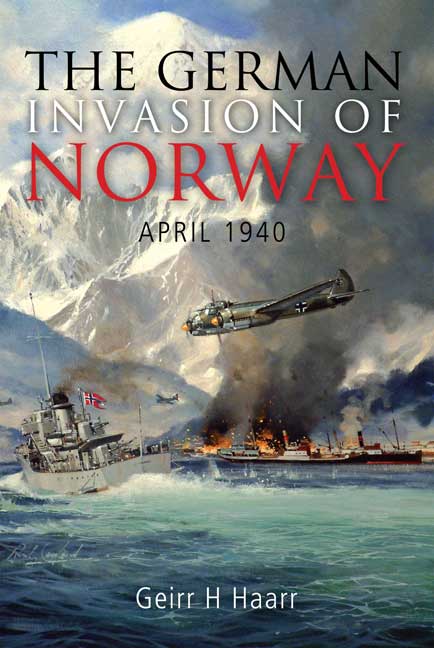 The German Invasion of Norway (Kindle)

Click here for help on how to download our eBooks
Add to Basket
Add to Wishlist
You'll be £8.00 closer to your next £10.00 credit when you purchase The German Invasion of Norway. What's this?
Need a currency converter? Check XE.com for live rates

This new book documents the German invasion of Norway, focussing on the events at sea. More than most other campaigns of WWII, Operation Weserübung has been shrouded in mystery, legend and flawed knowledge. Strategic, political and legal issues were at best unclear, while military issues were dominated by risk; the German success was the result of improvisation and the application of available forces far beyond the comprehension of British and Norwegian military and civilian authorities

Weserübung was the first combined operation ever where air force, army and navy operated closely together. Troops were transported directly into battle simultaneously by warship and aircraft, and success required co-operation between normally fiercely competing services. It was also the first time that paratroopers were used. The following days were to witness the first dive bomber attack to sink a major warship and the first carrier task-force operations.

The narrative is based on primary sources from British, German and Norwegian archives, and it gives a balanced account of the reasons behind the invasion. With its unrivalled collection of photographs, many of which have never before appeared in print, this is a major new WWII history and a definitive account of Germany's first and last major seaborne invasion.

The ultimate reference works to the Norwegian campaign and unlikely to be equalled let alone surpassed.

This is a highly detailed piece of work, with 400 pages of closely packed text. This has to be the definitive history of the early stages of the German invasion of Norway. A very impressive piece of work that comes highly recommended.

Focusing primarily on the naval operations, 'The German Invasion of Norway, April 1940', Provides readers with an exceptionally detailed and well-documented volume. Drawing from Norwegian, German and British primary sources and archives as well as numerous secondary sources, readers are given a balanced and thorough account of the naval aspect of the invasion. The book provides a highly readable and a compelling narrative of the German Invasion and failure to repulse it.
Although previous works have been discussed, the German campaign in Norway and Denmark, what has been missing is an exceptional work from the Norwegian perspective. This volume fills that void. The author not only shows how the operation was viewed by the Norwegians, Germans and British, but also Dane, Swedes, and French. Detailed appendices and numerous black and white photographs significantly enhance the volume, as do charts of operational areas.
The work is especially beneficial for readers limited to English. The book fills a needed void in naval studies of the Second World War and naval historians and enthusiasts will not be disappointed.

Weseriibung, the German operation that succeeded in the rapid invasion of Norway, saw the Nazi war machine at its most efficient. It was the world's first ever combined operation whereby air, land and sea forces operated collaboratively and simultaneously. This is the author's first book but he has a fine natural talent for maritime history. This is a magnificent work. Very little has been published so far on this important chapter of World War Two. This excellent book more than makes up for that.

The first volume of Geirr H. Haarr's tremendous new two-volume work zeroes in on the critical first days of Weserubung and offers a minutely detailed account of the unfolding action. The invasion, the Allied response and the political and strategic backdrop still have much to teach us. The author strikes a careful balance between chronology and geography, covering nearly simultaneous events in separate sections. The volumes are well illustrated with photographs, many published for the first time. Numerous appendices contain orders of battle, lists of ships and key personnel.

This is the first of this author's two books concerning the invasion of Norway. The review of of the second volume The Battle for Norway April-June 1940 (see Bulletin No. 241, August 2010) lamented that the author had not included mention of the sinking of HMS "Glowworm" by the heavy cruiser "Hipper". One is thus delighted to report that some eight pages and four illustrations in this first volume are devoted to the epic action, "Glowworm's " light thus shines on! Indeed the whole theme of the book is the actual invasion, the preliminary events and then the actions as German troops were transported to key centres from Oslofjord north to Narvik. Here the 2,600 German sailors, survivors from the ten destroyers sunk were soon in action ashore; indeed the author believes the Narvik position would not have been held without them. While the Norwegians, frustrated and disappointed could not understand why the British victory was not followed up, why we sailed away. The events along the lengthy coastline of Norway were soon overshadowed by those elsewhere in Europe, but for the people it changed their history forever. The book is the author's first, and what a first, some 474 pages, four maps and 188 illustrations, which together with the second volume are now the ultimate reference works to the Norwegian campaign and are unlikely to be equaled let alone surpassed.

Haar has done an outstanding job.....Haars book is unlikely to be surpassed, it is the most comprehensive account of that first week of battle at sea. It is copiously and excellently illustrated.

This has to be the definitive history of the the early stages of the German invasion of Norway and especially of the Naval campaign around Norway. A very impressive piece of work that comes highly recommended.

First-time author Geirr Haarr has expertly trawled through original documents in the archives of three countries to produce a book which is a model of clarity, well-written and lavishly illustrated. He has presented the political background to the invasion in a style that can be easily followed and his attention to detail in his account of the military and naval actions is to be praised. There can be little doubt that this work places the German invasion of Norway in its rightful place in the story of the Second World War and I can thoroughly commend it to anyone with an interest in the period.

I have read Geir Haarr's book and am extremely impressed. In my opinion it is now the most authoritative account of the naval aspect of the German invasion of Norway. I found myself gripped by the narrative and by the human as well as the technical aspects of the war at sea. This was the first major campaign of the Second World War, and it is clear that all sides were faced with unprecedented challenges, in the face of which improvisation, good and bad judgement and heroism all played their part. Using an impressive range of primary sources and an outstanding selection of photographs, the author has mastered both the broader strategic context and the innumerable engagements, large and small, that took place. He gives equal weight to the German, Norwegian and British sides and does not shrink from severe judgements on poor decision-making where appropriate. Long as the book is, I found myself wishing that he had been able to take to the story up to the end of the Norwegian campaign in June 1940 - but perhaps that is for a later project.