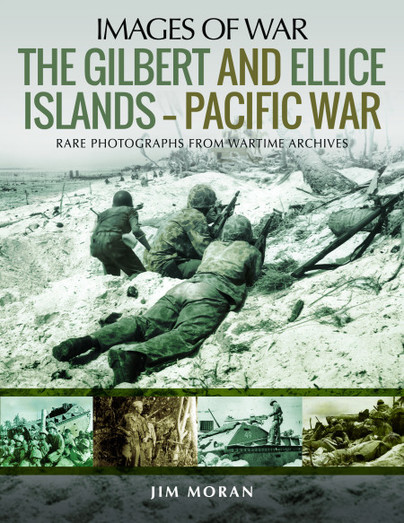 As seen in the Daily Mail, July 2019: 'Horrors of the Pacific war are revealed in new images.'

You'll be £4.99 closer to your next £10.00 credit when you purchase The Gilbert and Ellice Islands – Pacific War. What's this?
Need a currency converter? Check XE.com for live rates

This classic Images of War book covers the dramatic events that befell both the Gilbert and Ellice Pacific island groups using a wealth of well-captioned photos and informed text.

Soon after the attack on Pearl Harbor in December 1941, the Gilbert Islands were occupied by the Japanese who built a seaplane base at Butaritari. In August 1942 the Makin Atoll was attacked by the USMC 2nd Raider Battalion (Carlson’s Raiders). As a result the base was reinforced and a second built at Apamana. Betio Island on the Tarawa Atoll became the main Japanese strong point.

Operation Galvanic, the US assault on Butaritari, Apamama and Betio, was launched in November 1943 by the 2nd Marine Division and the 27th Infantry Division US Army. While short in duration, the Betio battle has the dubious distinction of being the most costly in US Marine Corps history.

Thanks to the author’s in depth knowledge and access to superb contemporary images, this book will be of particular interest and value to historians and laymen.

I like this book! It is a quick and good read containing many moderate quality, but rare, photographs. I personally like the Images of War series format, as it focuses on pictorial composition supported by descriptive captioning. The book provides an excellent overview of the battle for the Gilberts.

Images of war books are something I shall be taking more of an interest in especially if they are all as good a read as this one, and carry as many pictures. I am surprised at myself for not taking more notice of these titles in the past, something I will address now, this book was so easy to pick up and read and left me skipping some of the pictures to carry on reading about the Marine Raiders attacking in 1942. As for the pictures, for me, it is the equivalent of being a young boy going to a model shop with your birthday money not sure what model you want to buy first as there are so many fantastic ones to choose from. The way the book has been written and laid out I have to say a heartedly well done to Pen & Sword and of course the author Jim Moran.

Another great book to add to anyone’s library of reference material.

This range of books continues to expand and offer a good source of affordable reference to the modeller, historian or armour enthusiast alike. Some titles are better than others and I feel this title offers a great introductory pictorial with sound and concise historical information.

As it could not be otherwise, if the subject involves Marines by means, who better than Jim Moran to explain and evaluate us any situation.

The unique photographic collections, concise text and aggressive pricing have made the Images of War series extremely popular, this volume reviewing the Gilbert and Ellice Islands actions. The Japanese quickly occupied the islands after their Pearl Harbour attack and the Allies had to neutralize the airfields they built on the islands – Highly Recommended.

The war in the Pacific is something I know very little about, and probably the best way to start learning about it is to look at pictures. Jim Moran has collected a fine array of images involving the war in the Gilbert and Ellice Islands.

This is another very good book from Pen & Sword and the mixture of text and photographs gives a more complete overview of the actions rather than just a dry report relying purely on text and a few photos and maps. Thoroughly enjoyed this book and would recommend to anyone wishing to see how the US started its island-hopping campaign in the Pacific.

While the text and captions tell the story, the photos illustrate the heavy fighting which took place, especially on the island of Betio, where the Japanese aircraft were destroyed and US aircraft moved in to be based there. The levels of casualties for such a small piece of land is really quite astonishing, and that of a Japanese garrison of well over 4,000, only some 17 were taken prisoner. The photos illustrate the casualties, including some graphic images of Japanese dead after flamethrowers and explosives were used to clear their bunkers. Other show the Marine in action, along with their Amtracks and others show us the aircraft based on the airfield.

As the Pacific island hopping campaign moved on, so the US forces on the Gilberts left them to return to a more peaceful existence. One or two of the aerial photos included show the devastation of the surface of the island after the fighting was over. A neatly presented addition to the Images of War series and a suitable tribute to the US Marines who took part in the fighting.

The peculiarity of Tarawa was that perhaps for the first time a team of photographers and cameramen followed the first waves of landing, paying in many with life and giving us many photos and footage of this battle. Many of these are included in this book, as I think the photos of Makin's Raid by Carlson are important. An added value are the testimonies of soldiers and photographers in a book that combines beautiful photos with a narration of a battle that was bloody and glorious at the same time and for which even the conquests of other islands in the continuation of the war do not belittle the memory: Tarawa.

This title as part of the Images at War series is an exceptional addition to the range because it shows the brutality of war and the results of that brutality. The war fought between the US Marines and the Japanese for the most part tends to be covered from the American side and view point mostly, but I like how this offering endeavour's to show the conflict as it was rather than how many want it portrayed. The amount of death and destruction shown here on both sides tells a story all of its own that words alone can never portray and also shows why this war had to be fought. Excellent work by Jim Moran who has provided a more rounded offering in the images of war series via the addition of his text.