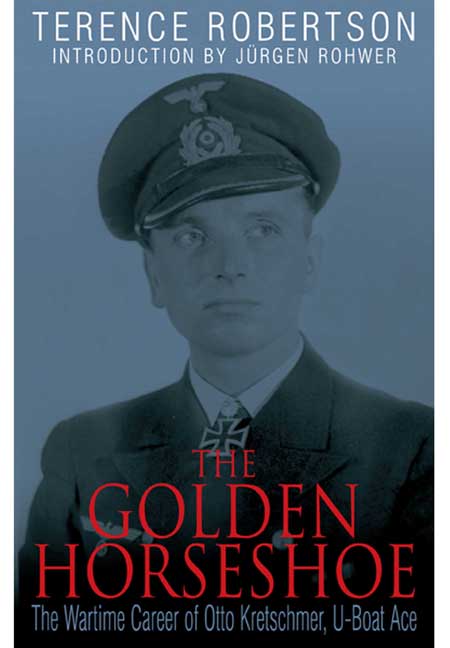 Click here for help on how to download our eBooks
Add to Basket
Add to Wishlist
You'll be £4.99 closer to your next £10.00 credit when you purchase The Golden Horseshoe. What's this?
Need a currency converter? Check XE.com for live rates

The legendary U-boat ace Otto Kretschmer was branded 'the wolf of the Atlantic', and for good reason. In his dramatic wartime career he sank ship after ship, sowing terror among Allied convoys and dismay in those charged with their protection.

Kretschmer was a daring officer who favoured bringing his U-boat into the heart of the convoy and destroying it from within. He earned himself a tremendous reputation before his capture in March 1941, and The Golden Horseshoe makes it clear why.

Terence Robertson's biography of the U-boat ace draws upon first-hand experience of conditions and the deadly game as the hunter sought to outfox the hunted. He paints a masterly portrait of life at sea and weaves in the fascinating story of Kretschmer and the exploits of his U-Boats. Kretschmer was eventually captured and interviewed by Captain McIntyre of HMS Walker, an episode which is also recounted in this book.

Otto Kretschmer became a prisoner of war in March 1941 and spent most of the rest of the war in Bowmanville camp, Canada, before his release in 1947.

A new reprint of a book first published in 1955. Terence Robertson follows WW2 U-boat ace Otto Kretschmer who from 1939 - 1941 sank 47 ships and was the top scoring U -boat commander throughout WW2. It was lucky for the Allies that he was eventually captured and Robertson's account also describes Kretschmer's interment. A remarkable life.

He paints a masterly portrait of life at sea and weaves in the fascinating story of Kretschmer and the exploits of his U-Boats.

Otto Kretschmer was one of the highest scoring German U-Boat Captains in World War 2. His exploits are vividly retold in this interesting and exciting biography. During the war he revolutionised “standard” U-Boat tactics and Admiral Doenitz the Commander in Chief of the German U-Boats highly praised Kretschmer for this.
Kretschmer did not seek much publicity both during and after the war. As a result of this the author has done a significant service towards recording the exploits of this infamous U-Boat ace. Once you start reading this outstanding book you will not want to stop until you have reach the last page!