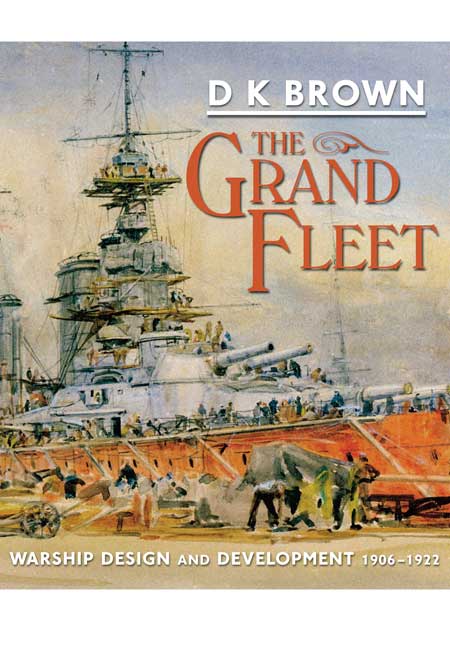 Click here for help on how to download our eBooks
Add to Basket
Add to Wishlist
You'll be £11.99 closer to your next £10.00 credit when you purchase The Grand Fleet. What's this?
Need a currency converter? Check XE.com for live rates

The launch of HMS Dreadnought in 1906 ushered in one of the most rapid periods of warship development in history; and only ten years after this all-big-gun, turbine-powered battleship was completed, two entire fleets of Dreadnoughts would meet at Jutland and put the work of the prewar designers to the ultimate test.

The renowned warship author, D K Brown, examines the development of these vessels and looks at how wartime experience affected warship design. As well as battleships and battlecruisers, for the first time the developmental history of smaller vessels such as minesweepers, monitors and escort vessels, built in direct response to wartime needs, is described, as is that of the submarine and aircraft carrier. A detailed study is made of battle damage, including the role played by ammunition explosions in the loss of three British battlecruisers at Jutland. Also described are the postwar capital ship designs, killed off by the Washington Treaty, which are among the most fascinating 'might-have-beens' of naval history.

... this book was a worthy addition to my library.

The book contains many monochrome archive photographs as well as a number of interesting and informative drawings, both of the vessels themselves and of such aspects as bulging and armouring systems.

In both volumes, the illustrations are extensive, often of outstanding quality and sometimes making their first appearance in a modern publication. The author has also gone to much trouble over the captions, which are extensive and complement the text – and have very few errors. Highly recommended.

This book is indispensable for any naval historian. It is a historiography in that it charts the evolution of warship design and development in the years 1906-1922 in the United Kingdom. An important and valuable book.

A minor classic. Strongly recommended for all interested in British and Naval history.

The author has managed to make the technical detail accessible to the layman and consequently it is easy to read as well as being authorative. Deserves to be on the bookshelf of any nautical enthusiast. Very highly recommended.

This is the long-awaited reprint of a title first.

Beginning with the evolution of Royal Navy policy to meet the perceived German threat after 1903, Brown traces ship and weapon design through 1922. He outlines the evolution of all major types and classes from the original Dreadnought and the original improvised aircraft carriers to smaller combatant cruisers, merchant cruisers, destroyers, sloops and submarines. Smaller inshore vessels and even monitors designed for coastal bombardment are included, as is a section on experience gained from WWI battle and mine damage. There is a treatment of the postwar capital ships killed off by the Washington Naval Treaty of 1922 limiting battleship tonnage, a fascinating look at what might have been.