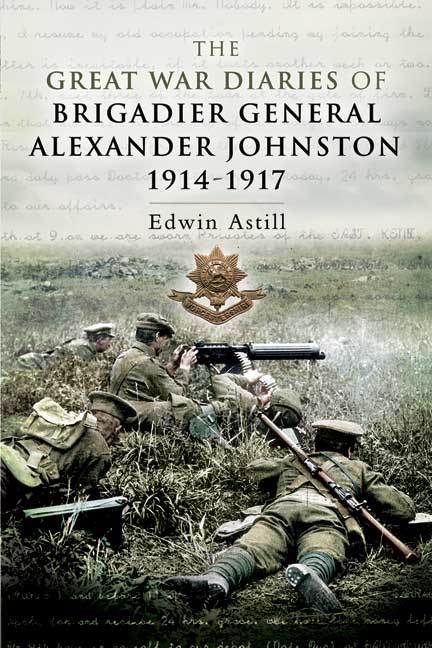 Click here for help on how to download our eBooks
Add to Basket
Add to Wishlist
You'll be £4.99 closer to your next £10.00 credit when you purchase The Great War Diaries of Brigadier Alexander Johnston. What's this?
Need a currency converter? Check XE.com for live rates

Alexander Johnston went over to France in August 1914 as the signals officer for 7 Infantry Brigade. He went on to serve in that capacity with 3rd Division before becoming, in turn, Brigade Major, Commanding Officer 10th Battalion Cheshire Regiment and finally Officer Commanding 126 Infantry Brigade. Throughout he proved himself to be a brave, resourceful and determined soldier. He was always close to the front line, yet his signals and staff duties gave him insights into the conduct of the war at higher levels. Therein lies the value of this diary. Many of the major engagements of the war are covered. He took part in Mons, Le Cateau and the subsequent retreat and advance to the Aisne. The diary provides valuable insights into the battle of La Bassee and the trench warfare of 1915. As a Brigade Major he was kept busy in 1916 with both holding the line (in the face of intensive enemy mining operations) and the Somme battle. By 1917 his work in command of 10th Cheshire Regiment showed positive results in the battalion's performance at Messines and gained him promotion to Brigadier General. Within days of taking command he was up at the front line where he was badly wounded. But for the wound Johnston may well have gained even higher command and wider acclaim for his services. The diary is an important addition to the literature of the Great War.

Used as a reference in Illusions and Disillusions, Vain Hopes and Great Disappointments