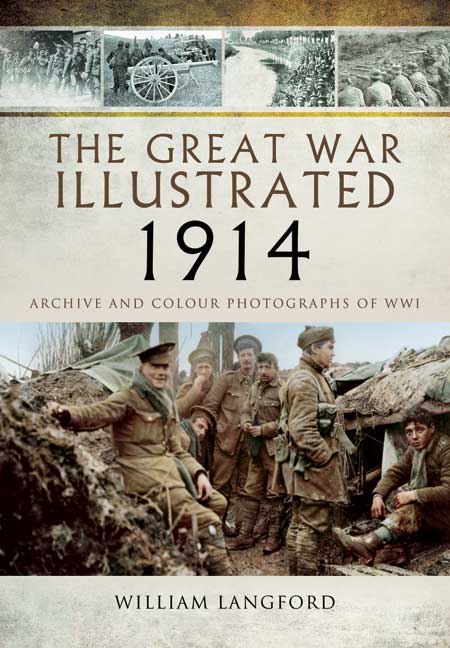 Click here for help on how to download our eBooks
Add to Basket
Add to Wishlist
You'll be £4.99 closer to your next £10.00 credit when you purchase The Great War Illustrated 1914. What's this?
Need a currency converter? Check XE.com for live rates

First of a series of five titles which will cover each year of the war graphically. Countless thousands of pictures were taken by photographers on all sides during the First World War. These pictures appeared in the magazines, journals and newspapers of the time. Some illustrations went on to become part of post war archives and have appeared, and continue to appear, in present-day publications and TV documentary programmes – many did not. The Great War Illustrated series, beginning with the year 1914, will include in its pages many rarely seen images with individual numbers allocated and subsequently they will be lodged with the Taylor Library Archive for use by editors and authors.

Gt War Illustrated 1914 covers the outbreak of hostilities, the early battles, the war at sea, forming of the great trench line stretching from the coast to the Swiss border and ends with the Xmas truce. Some images will be familiar – many will be seen for the first time by a new generation interested in the months that changed the world for ever.

As seen in Soldier and Essence magazines.

An indispensable and essential piece of work that can not fail in your library. You have to get it at any price.

Now this is a grand idea on the part of Pen & Sword. It is the first in a series of five titles which will cover each year of the Great War. ... The book is a superb resource [and] I am really looking forward to future volumes.

William Langford has done an excellent job in gathering these unique pictures and has provided a high-quality reference book on the first part of World War I.

A treasure trove. This is one of those books that you just have to have on your shelf if you have any interest at all in the Great War.

This book by William Langford chucks in a blizzard of photographs. None of them stand alone and give themselves leg room for you to absorb them in isolation. They are not generally presented for their photographic merit. They are records crammed into a kaleidoscope of incidents and actors of a drama now well and truly back in our faces. I love it.

A lot of thought has gone into this book. This book is as subtle as a flying chainsaw and confronts the reader with so much information it takes time to gather it all in. Perfect! This means you can dip in and out and take your time with it. Best of all, this is just one year of the war and signals further volumes, well I at least I hope it does. It is a bit of a no brainer.

There are great photos and simple records all juxtaposed in a huge tapestry of history. Grand words – but, the proof is in the photography and the brilliance of the men (for they were mostly that) who carried the cameras. They are giants to me, they did fantastic things and so many of them are anonymous; with only their work left to connect with us. The more of this we can share the better. William Langford has got hold of the idea and I can’t help get that bit of comic nonsense from Tommy Steele out of my head. Hold it! Flash bang wallop! What a picture!  Yeah, right! What a picture, what a photograph. There are hundreds of them here and the promise of more of this crash, bang wallop style of presentation makes me smile.