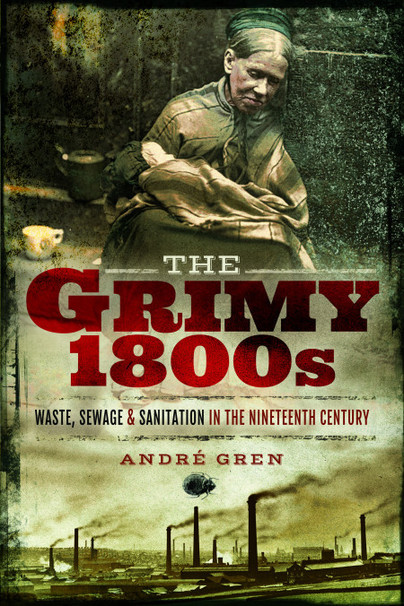 Click here for help on how to download our eBooks
Add to Basket
Add to Wishlist
You'll be £4.99 closer to your next £10.00 credit when you purchase The Grimy 1800s. What's this?
Need a currency converter? Check XE.com for live rates

In the nineteenth century, as towns grew, Britain became increasingly grimy. The causes of dirt and pollution were defined legally as ‘nuisances’ and, in 1835, the new local authorities very rapidly appointed an army of ‘inspectors of nuisances’.

This book is the inspectors’ chronicle: it offers their eye-witness accounts and a plethora of details pertaining to the workings of the scrutinising Parliamentary Committees that were set up in an attempt to ease the struggles against filth. Inspectors battled untreated human excreta in rivers black as ink, as well as insanitary drinking water, which was home to tadpoles and portions of frogs so large that they blocked taps. They dealt with putrid animal carcasses in cattle markets and slaughterhouses, not to mention the unabated smoke from mill chimneys that covered towns with a thick layer of black grime. Boggle Hole Pond was a source of drinking water full of dead dogs; ice cream was coated in bugs; stinking rotting crabs, poultry and pigeon smells polluted the air. Even the corpses floating out of badly drained burial grounds were ‘nuisances’, leading to the practice of burning the remains of the dead.

This is the history of a grimy century in the throes of the Industrial Revolution, illustrating the many ways in which the country responded to the ever growing demands of a new age of industry.

If you've ever wondered how your ancestors coped before the sanitation advances we enjoy today, this will be right up your street. You'll thank your lucky stars for clean running water and toilets!

The Grimy 1800s is an excellent little introduction to the history of public health and sanitation in England. Written by an Oxford graduate, Andre Gren, who has managed to overcome poor sight, to research something that is being researched quite a lot in the academic world... He covers a wide range of subjects and handles them in a sympathetic way, and is an excellent introduction to the subject of public health in the nineteenth century.

I enjoyed this book I will admit that if the author had not taken the time to get the records he had and put them together in this book, I would not have though to go and look for them myself.

The book is a good introduction and it is one that sparked my interest to look further in to what would have been like where I like. I know when my dad was born in the late 1950s my grandparents lived in a traditional back-to-back property in Birmingham where they had one toilet at the end of the block of houses for communal use so this was a book that hit home for me seeing what my relatives could, and did live through.

I really liked the way that the book was set out with the different chapters focussing on the different type of “nuisances” and some of what was described was shocking and it did make me shiver, and my skin almost crawl. I am so pleased that sanitation and the sewers were introduced and accommodation (generally) has improved for all.

The Grimy 1800s really makes you feel for the people who had to live in such horrid conditions back then. The author has clearly done his research.

This volume is well-written and easy to read.

"The Grimy 1800s" summarizes reports given by Inspectors of Nuisances in England on various sanitation topics between 1846 and 1915. These inspectors were created in the mid 1800s and reports were recorded by Parliamentary Committees over the years. The author summarized the contents of these reports, selecting ones that he felt were the most interesting. He covered overcrowding, privies, poor or no drainage, improper human waste disposal, lack of availability of clean water, water pollution, food safety, bad smells, reporting of infectious diseases, excess smoke from mills and such, and what type of ground made for a good cemetery. I'd recommend this to anyone researching specific examples of these problems (what town and at what time).

Overall I found it quite interesting and it definitely made me realise how fortunate we are and how much we take something such as rubbing water for granted... Overall quite an interesting book which I would recommend to history fans.

Gren does an excellent job of putting forward the inspectors’ evidence in modern English, aimed at us, readers in the 21st century. I expected the book to be rather sensationalist, gleefully showing me disgusting scenes of dirt and infestations. It’s not really like that. Sure, Gren shows us some horrible practices such as sewage flowing into drinking water; and taps clogged up with the bodies of tadpoles and frogs, but the general impression is of a cadre of officials fighting on behalf of the poorer echelons of society. Wealthy and middle-class people could afford to sink private wells to get clean water; the poor had to make do with contaminated wells and taps. The inspectors were frustrated by their lack of power to shut down nuisances as quickly as they would like. The processes were slow and malefactors often just ignored the authorities or delayed acting as long as possible.

The Grimy 1800s by Andre Gren is an intersting read if you are interested in the issues caused by rising populations in the 1800s and the problems that the pollution caused.

After leaving Merton College, Oxford, with a First in history, Andre Gren worked in Parliament for a number of Select Committees, until losing most of his sight in a car accident. He has since written books on Brunel, the Tay Bridge disaster, and Victoria Cross winners.

He lives in Newbury with his wife and an over-vigorous Dalmatian.