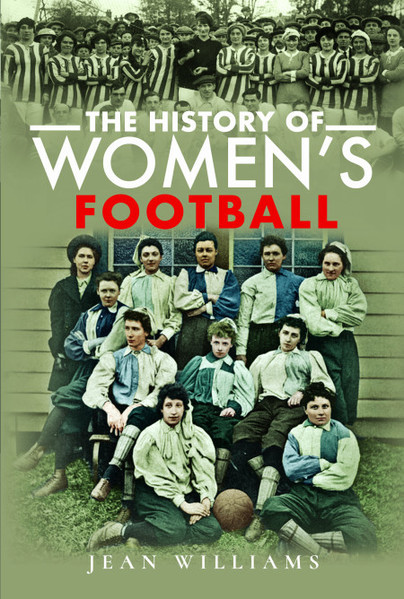 The History of Women's Football (Kindle)

Click here for help on how to download our eBooks
Add to Basket
Add to Wishlist
You'll be £9.98 closer to your next £10.00 credit when you purchase The History of Women's Football. What's this?
Need a currency converter? Check XE.com for live rates

As featured in: 'Bid to score with beautiful game's history in book'

Detailed look at the development and history of the Women's game and I found it very interesting with modern players discussing their experiences with FA and the gradual professionalism from part time.

Well this is a good read for anyone who loved the movie 'A League of Their Own'!!! I was quite unfamiliar with women's football (soccer for us Americans) but wanted to push my nonfiction reading out of my comfort zone. Sport's history is definitely outside it. I loved how the league started as easily as women just wanting to play, some didn't even know how initially. But of course with any history there is a dark side. This book covers the unfair treatment that the women's football league faced. A good book to pick up for any footballers in your life.

Going into reading I had some knowledge of the men's football in the late 19th century due to 1) having a at-the-time-famous footballing ancestor and 2) being obsessed with researching every possible facet I can of not both my ancestors lives and the people surrounding them, but my knowledge of women's football at the time was sorely lacking. In the last couple of years it's been fantastic to see even more eyes on the women's game, to the extent that yesterday saw Arsenal W.F.C vs Chelsea F.C Women compete in the Women's FA Cup final on BBC One yesterday. As as a wee lass I don't remember ever seeing women footballers on television growing up and I'm so glad it's something that's becoming more accessible now for any wee lassies out there to enjoy, root for, and maybe even aspire to.

What fascinated me the most in this book were the similarities between men and women's football with regards to the fostering of community spirit, along with the changing transport infrastructure which let more people enjoy the spectacles of matches and gave players the chances to see new locations.

I was also glad that the book while dealing with 19th century football didn't focus overly on England, although I did feel the book latterly slipped into that. Despite that, I enjoyed reading the experiences of the women during the more 'modern' era, as I hadn't realised just how young a lot of girls were when they made the steps into football. Even then I'm not sure 'enjoyed' is the most appropriate word - the discrimination faced by the likes of Pat Dunn was awful to read!

All in all, this is a book I'm going to go on to purchase a physical copy of for my bookshelf, as I can see myself referencing it a few times in the future, especially when I get chances to geek out about the history of football.

I will 100% admit I’m not a big football fan, but women’s history I love and knowing bits of the history of the sport for women being barred etc I was eager to know more. I thought this was really well presented, I found it so interesting and despite not really liking football it didn’t lose my interest for one moment. Really impressive read, that I highly recommend to everyone.

Beginning with the early success of games played in the late 19th century, through the doldrums of the post WWI period, to the rising popularity and profile of the modern day game, this is a pretty comprehensive history of women's football in England. Other nations, including Wales and Scotland, feature mostly to the extent to which they interacted with English teams of each period.

I found this an interesting read, though it is frequently quite distressing to read about the treatment of enthusiastic footballing women. The FA made determined efforts to drive women out of the game, and even after accepting that they should promote women's football, they've frequently failed to treat teams fairly, to properly fund the players, or to support women of colour against institutional racism in their own organisation... If that's a topic of interest to you, definitely check it out.

It’s a quite historical, but very interesting and informative history of women’s football, just as the title suggests. I like the chronological order of events and how it is structured to show changes and developments through time. It is well written to focus on both particular events and narrative moments and also over time things. Overall, a great book definitely worth a read!

A well-researched and informative book about the history of women's football, focusing on the UK, with a bit of international outlook. I enjoyed reading the oral histories of the coaches and female football players in particular, the personal stories behind these pioneers, while, despite all the money they raised for charity, the lack of their recognition made me bitterly angry.