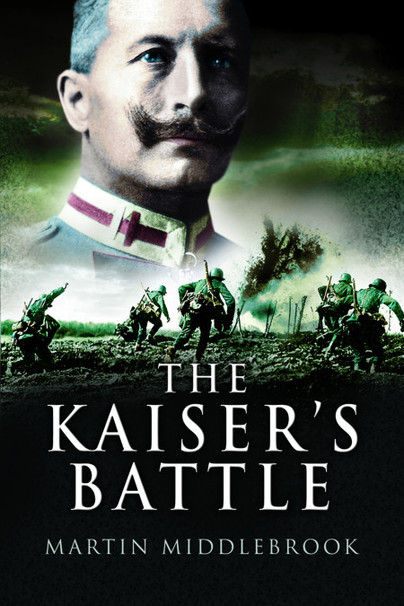 Click here for help on how to download our eBooks
Add to Basket
Add to Wishlist
You'll be £4.99 closer to your next £10.00 credit when you purchase The Kaiser's Battle. What's this?
Need a currency converter? Check XE.com for live rates

At 9.30am on 21 March 1918, the last great battle of the First World War commenced when three German armies struck a massive blow against the weak divisions of the British Third and Fifth Armies. It was the first day of what the Germans called the Kaiserschlacht (‘the Kaiser’s Battle’), the series of attacks that were intended to break the deadlock on the Western Front, knock the British Army out of the war, and finally bring victory to Germany. In the event the cost of the gamble was so heavy that once the assault faltered, it remained for the Allies to push the exhausted German armies back and the War was at last over.
Critics accounts:
The clever blending of written and oral accounts from some 650 surviving British and German soldiers makes the book an extremely convincing reconstruction. SUNDAY TIMES
Mr Middlebrook’s industry and patience are displayed in his amazing collection of eyewitness accounts, the compassion in his commentary, the good sense in his analysis’ DAILY TELEGRAPH

Martin Middlebrook's The Kaiser's Battle remains the definitive account of one of the most important days of the fighting on the Western Front in the Great War.