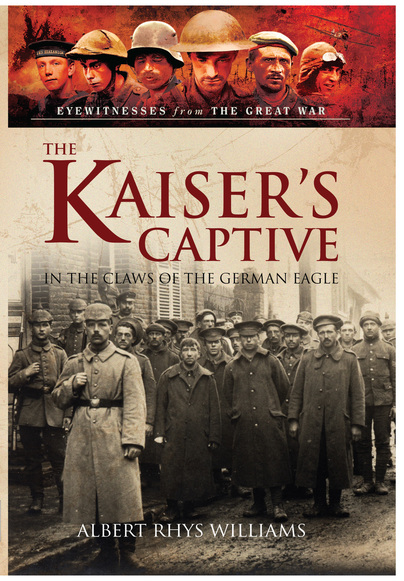 In the Claws of the German Eagle

Click here for help on how to download our eBooks
Add to Basket
Add to Wishlist
You'll be £4.99 closer to your next £10.00 credit when you purchase The Kaiser's Captive. What's this?
Need a currency converter? Check XE.com for live rates

Albert Rhys Williams was an American journalist and author. In 1914, Williams travelled to Europe as the special war correspondent for Outlook magazine, tasked with the duty of reporting the events of the Great War.

In these early days of the conflict, Williams had the misfortune to fall into the hands of the Imperial German Army. He was arrested in Belgium and marched into captivity on the suspicion that he was a British spy.

On his return to the United States, Williams published In the Claws of the German Eagle in 1917. This fascinating book details Williams' experiences both on the front and in German captivity and provides a rare opportunity to discover the events as they unfolded behind the German lines.

This little-known account was first published in 1917 and has now been re-printed to Pen & Sword's usual high standards. At a little over 140 pages it's a slender account but a useful counter to memoirs of the time written by serving soldiers. Albert Rhys Williams was an American journalist, captured early on, and there are some quaint touches; timely reminders perhaps that in the early days of the war at least there were still those on both sides who believed in fair play and a man's word being as good as his bond. One of William's interrogators asks him, "Can you tell me on your word of honour that you are not a spy?" Williams gives his word and the German officer in turn promises to put in a good word for him. Such sense of innocence and fair play would later be enacted more publicly in the unofficial Christmas Truce of 1914.

Despite being published when Britain (and America) were still at war with Germany, this is a balanced account by ostensibly a neutral observer and there is a refreshing lack of jingoism. Germans are Germans rather than Huns and the gangrene is not war but the hatred which fills people's hearts and makes "the heart-breaking task of reconciliation well-nigh impossible".

In 1914 Williams found work as a journalist with the magazine, Outlook. He was sent to Europe to cover the First World War. He was arrested in Belgium and detained by Germans who suspected him of being a British spy. On his return to the
United States he published In the Claws of the German Eagle in 1917.

Williams then joined the New York Post and was sent to Petrograd to report on the conflict that was taking place in Russia
following the overthrow of Tsar Nicholas II. He stayed in Russia until May 1918.