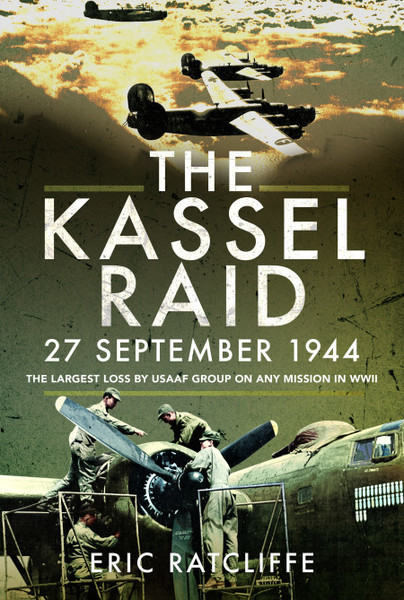 The Largest Loss by USAAF Group on any Mission in WWII

Click here for help on how to download our eBooks
Add to Basket
Add to Wishlist
You'll be £8.99 closer to your next £10.00 credit when you purchase The Kassel Raid, 27 September 1944. What's this?
Need a currency converter? Check XE.com for live rates

On Wednesday, 27 September 1944, a force of 283 Consolidated B-24 Liberator bombers from the USAAF’s 2nd Combat Bombardment Wing, took off from their bases in Britain and headed out across the North Sea escorted by 198 P-51 Mustang fighters. The bombers’ target was the industrial city of Kassel in northern Germany.

Among the bombers assigned to the raid were the aircraft of the 445th Heavy Bombardment Group. Thirty-five of the 445th’s Liberators, along with the 336 men who made up their crews, took off from their base near the village of Tibenham in Norfolk. Their specific target that day was the engineering works of Henschel & Sohn which built Tiger and Panther tanks.

Kassel had been bombed by the Allied air forces in the past, most notably in October 1943 when more than 500 bombers had dropped 1,800 tons of bombs creating a firestorm that had ravaged the city. The raid on 28 September 1944, however, would have a far different result.

Due to a navigational error, the lead Liberator of the 445th Heavy Bombardment Group turned due east instead of east-south-east and the following thirty-five bombers missed Kassel altogether, attacking an alternative target. But the worst was to come. The change of direction meant that the bombers lost their escorting Mustangs and on the return flight they were pounced on by 150 enemy fighters – and massacred.

Within just six minutes, the 445th experienced the greatest single-day losses suffered by any group from one airfield in the history of aviation warfare. Twenty-five of the Liberators were shot down inside Germany itself; three crashed en route to the coast (two in France and one in Belgium); two made forced landings at an emergency airfield in England; and the last came to grief within sight of home. Just four of the original thirty-five B-24s landed safely back at Tibenham. The human cost was equally high. In the course of just a few minutes, 117 airmen lost their lives, including eleven who were murdered after parachuting safely to the ground. A further 121 men were taken prisoner; only ninety-eight returned to duty.

In this highly moving account of the Kassel raid, the author, who lives close to the Tibenham airfield, uncovers the painful details of those terrible moments in September 1944 through the stories of those who survived one of the Second World War’s most disastrous operations in the USAAF’s battle against the Luftwaffe.


The story is well told and the research and information within the book make it a really good quality book to buy. So credit to the author Eric Ratcliffe for his work. There is an excellent number of tables at the back of the book that details all the pilots and crew that were lost on the raid. I still stand by my opinion that this would make a good film. I fully recommend this book to others.

An absorbing and compelling account of a bombing mission that went wrong. The author brings together the many elements that both created the problems that beset the mission and also the outcomes. It is difficult to read this book without William Wyler’s 2018 documentary The Cold Blue, (derived from his Memphis Belle footage) intruding to add colour to the narrative. My suggestion is to watch The Cold Blue then read this book. You won’t be disappointed.

* THE KASSEL RAID
By Eric Ratcliffe

Eric does an excellent job of telling the compelling story of this tragic mission. By expertly intertwining the many components of the story it keeps the reader’s attention, providing details of training, the challenges of getting to England, and setting up a new base from farm fields for their perilous missions. The elements of the Kassel Raid itself are complex, from the dreaded briefing, the dangers of the formation join-up and the gravity of a navigation error, leading to the savage battle with the Luftwaffe - guns against cannon. The brutality of the individual battles is harshly, but realistically portrayed, as is the aftermath for the fortunate – jumping or being blown out of a fiery B-24, no doubt as told by survivors. The fate of crews after landing in Germany, often injured, is well described. Their survival differing by circumstance and chance. Some to suffer greatly or be killed by Germans and others to endure as POWs and eventually return to their homes.

I’ve known Eric for several years, having enjoyed a tour of East Anglia with him, including Tibenham with some glider flying. He is passionate about WWII history; his expertise and extensive research combine to create this excellent book.

Having collected my signed copy on Saturday morning from the Author at Tibenham Airfield where it all began, I started the read on Sunday morning, barely being able to put it down, certainly not my normal type of book, but I found I couldn't absorb enough information about this raid, hanging on every word, I felt as if I was there during their preparations and briefings they were so detailed, page after page, learning as I went. The photographs also added to the event bringing it home to me that they were indeed such young brave fearless men, ready to do whatever it took. Highly recommended. I am slightly too young to remember the war and find it hard to comprehend all that happened, but now I know a little bit more and would like to thanks Eric for taking pen to paper creating what I hope will become a best seller worldwide, Carol

Born in the North of England, at an early age ERIC RATCLIFFE moved with his parents to Norfolk, where he still resides. His love of flying began in 1975, when, aged 28, he first tasted gliding. Eric continues flying both gliders and powered aircraft to this day. It was his involvement with the Norfolk Gliding Club, and their home airfield at the ex-USAAF base at Tibenham, which aroused his interest in the Second World War, vintage aircraft, and the aircrew who flew them. Retiring from his engineering business seven years ago, Eric found the time to research the Kassel mission, whilst still acting as a tour guide of wartime battlefields and air bases in UK, France, and Germany.