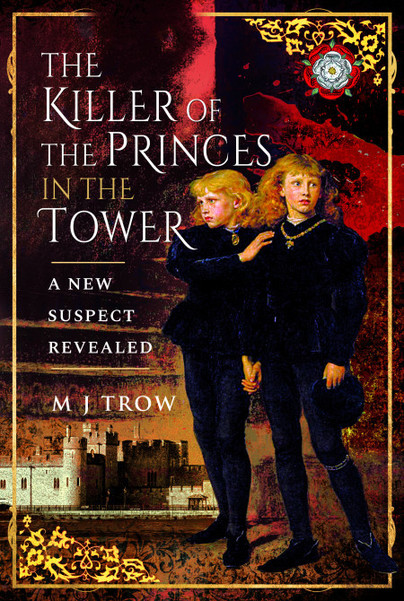 The Killer of the Princes in the Tower (Hardback)

Preorder
Add to Wishlist
You'll be £15.99 closer to your next £10.00 credit when you purchase The Killer of the Princes in the Tower. What's this?
+£4.50 UK Delivery or free UK delivery if order is over £35
(click here for international delivery rates)

The disappearance of two boys during the summer of 1483 has never been satisfactorily explained. They were Edward, Prince of Wales, nearly thirteen at the time, and his brother, Richard of York, nearly ten. With their father, Edward IV, dying suddenly at forty, both boys had been catapulted into the spotlight of fifteenth-century politics, which was at once bloody and unpredictable.

Thanks to the work of the hack ‘historians’ who wrote for Henry VII, the first Tudor, generations grew up believing that the boys were murdered and that the guilty party was their wicked uncle, Richard, Duke of Gloucester. Richard crowned himself King of England in July 1483, at which time the boys were effectively prisoners in the Tower of London.

After that, there was no further sign of them.

Over the past 500 years, three men in particular have been accused of the boys’ murders – Richard of Gloucester; Henry Tudor, Earl of Richmond; and Henry Stafford, Duke of Buckingham. The evidence against them would not stand up in a court of law today, but the court of history is much less demanding and most fingers remain pointed squarely at Richard of Gloucester.

This book takes a different approach, the first to follow this particular line of enquiry. It is written as a police procedural, weighing up the historical evidence without being shackled to a particular ‘camp’. The supposition has always been made that the boys were murdered for political reasons. But what if that is incorrect? What if they died for other reasons entirely? What if their killer had nothing to gain politically from their deaths at all?

And, even more fascinatingly, what if the princes in the Tower were not the only victims?