A Military History of the Knights of St John

Add to Basket
Add to Wishlist
You'll be £19.99 closer to your next £10.00 credit when you purchase The Knights Hospitaller. What's this?
+£4.50 UK Delivery or free UK delivery if order is over £35
(click here for international delivery rates)

The Knights of St John evolved during the Crusades from a monastic order providing hostels for Christian pilgrims visiting the Holy Land. The need to provide armed escorts to the pilgrims began their transformation into a Military Order. Their fervour and discipline made them an elite component of most Crusader armies and Hospitaller Knights (as they were also known) took part in most of the major engagements, including Hattin, Acre and Arsuf.

After the Muslims had reconquered the Crusader Kingdoms, the Order continued to fight from a new base, first in Rhodes and then in Malta. Taking to the sea, the Hospitallers became one of the major naval powers in the Mediterranean, defending Christian shipping from the Barbary Pirates (and increasingly turning to piracy themselves as funding from their estates in Europe dried up). They provided a crucial bulwark against Islamic expansion in the Mediterranean, obstinately resisting a massive siege of Malta by the Ottoman Turks in 1565. The Order remained a significant power in the Mediterranean until their defeat by Napoleon in 1798.

In the process of telling this story, Carr also gives us an overview of military practice and trends in the Mediterranean world from the Crusades through the age of Revolution. This is a good read for anyone unfamiliar with the knights

Enhanced with illustrations, a three page Appendix, six pages of Notes & References, a two page Bibliography, and a six page Index, "The Knights Hospitaller: A Military History of the Knights of St John" is a deftly written, impressively comprehensive history that is thoroughly 'reader friendly' in organization and presentation. Exceptionally informed and informative, "The Knights Hospitaller" is unreservedly recommended, especially for community and academic library collections.

Not knowing much about the period I felt some research was in order, so I tracked down Pen and Sword Books The Knights Hospitaller by John Carr. The book is written in a very easy to read, conversational style and I found it to be most interesting, from beginning to end. This is not a simple listing of historical events, but a more enjoyable journey through the history of the order. Taking the story from the inception of the Knights of Saint John (the order is known by several names, The Knights Hospitaller, The Order of the Knights of Saint John, The Knights of Malta ...) in Outremer, as a protective escort force for Christian pilgrims and hospital, through their more militaristic battle against the Ottoman Empire and right up to charitable organisation in it's modern form.

I would highly recommend the book for anyone interested in medieval knightly orders or the history of the Crusades.

Medieval times was a fascinating period of honor, ambition and grotesque violence. It laid the foundation for the Renaissance era which gave birth to humanism and many other philosophies that became the foundation of western civilization. I fully recommend this book as it offers us a valuable opportunity to reexamine medieval history through the lens of the Knights Hospitaller.

It is a story well-told, vivid, inspiring and well worth its place both in the mind and on the bookshelf.

Devoted to the history of the Knights of Saint
Jean, from the founding of their monastic order until the taking of Malta by Bonaparte in 1798.
The book takes the form of a narrative strictly
chronological, each chapter on one of the great events of history of the Hospitallers. The importance of "The fleet of Religion", its struggle against the Barbary pirates and the Ottomans is not forgotten either.

John's book gives us a rare insight into the monastic order that gave birth to the Knights Hospitaller, charting their history and exploits from their formation to the Napoleonic wars at the end of the eighteenth century. History doesn't get any better than this. 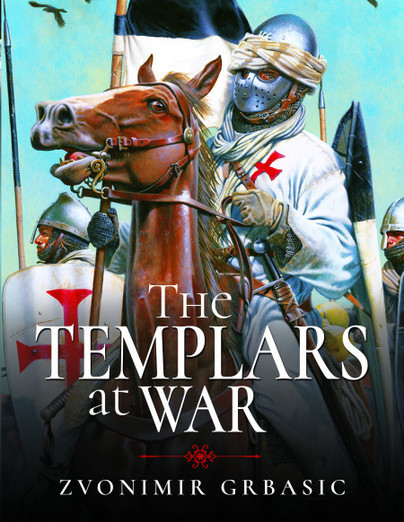 The Templars at War (Hardback)

The Poor Fellow-Soldiers of Christ and the Temple of Solomon, better known as the Knights Templar or simply the Templars, are the most famous of the Crusading knightly orders. Formed in 1119 to protect Christian pilgrims to the Holy Land, this curious hybrid of military unit and monastic brotherhood were the staunchest defenders of the Crusader States of Outremer for nearly two centuries. Knights joining the Templars renounced their worldly possessions and vowed to follow a strict code, which included the command to fight the infidel enemy bravely regardless of the odds. They provided Christian…

Click here to buy both titles for £43.99
More titles by John Carr