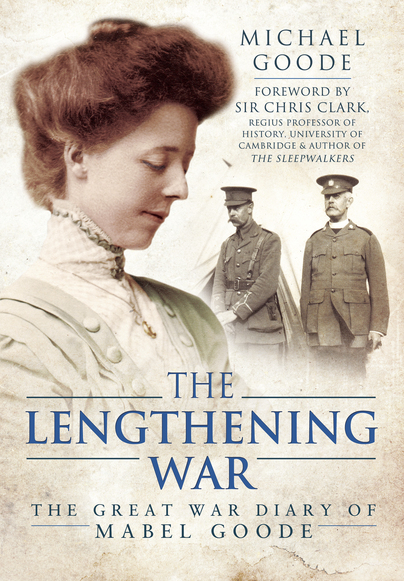 As reviewed in the Darlington and Stockton Times

You'll be £8.00 closer to your next £10.00 credit when you purchase The Lengthening War. What's this?
Need a currency converter? Check XE.com for live rates

The First World War was an event so important, so catalytic, so transformative that it still hangs in the public memory and still compels the Historian’s pen. It was a conflict which, by the end of the struggle, had created a world unfamiliar to the one in existence before it and brought levels of destruction and loss all too unimaginable to the generation of minds which created it. Despite this, we still find it hard to picture what it was like to live through this war. Right from its start, Mabel Goode realised that the First World War would be the biggest event to take place in her lifetime. Knowing this, she took to recording it, taking us day by day through what living in wartime Britain was like. The diary shows us how the war came to the Home Front, from enrolment, rationing, the collapse of domestic service and growth of war work, to Zeppelin attacks over Yorkshire, and the ever mounting casualty lists. Above all else, Mabel’s diary captures a growing disillusionment with a lengthening war, as the costs and the sacrifices mount. Starting with great excitement and expecting a short struggle, the entries gradually give way to a more critical tone, and eventually to total disengagement. The blank pages marked for 1917 and 1918 are almost as informative as the fearful excitement captured at the onset of that tremendous conflict.

This is a strong narrative of the war, easy to read, mixing news with personal feelings and events (often revealing gap between official news and reality). Also included are several poems written by Mabel and a love story in the appendix, giving a complete insight into the life of the diarist. Of note is the fact that Mabel and her brothers (the main serving protagonists in the diary) lived in Germany for some time, meaning they could all speak German and knew 'the enemy nation' as many Britons did not.

This is such a valuable book it deserves to be widely read. It is a very human story that is rarely told, providing a fresh perspective.

This book is definitely one that everyone who has any kind of interest in WW1 should read it, it is emotional and real, there is a clarity and vividness that you don’t get from other works. I love how this is laid out too, it’s start with the fact of what Mabel mentioned, followed by her diary. The entire book is thoroughly engrossing, it is an easy book to read, it’s not taxing or overly complicated there is a very warm and loving feeling to it, while reading the diary part of the book it is so clear it is like Mabel is actually standing here telling you her story.

A fabulous addition to the bookshelf and one that I will be pulling off again to read.

“The Lengthening War: The Great War Diary of Mabel Goode” is an extremely important social history record of the way of life of middle class people in Britain that disappeared completely after the First World War. Edited by her great-nephew Michael Goode, and with a Foreword by Sir Chris Clark - Regius Professor of History at Cambridge University - Mabel’s diary takes us through the early days of the war and tell us how people at home saw the conflict develop and the effect it had on their lives. Michael explains that Mabel’s perception of the war comes mainly from what she read in the newspapers – the quote from Lord Northcliffe about news at the start of Chapter two is particularly telling...

I thoroughly enjoyed the book and was particularly interested to read about the day-to-day details of Mabel’s life.

I enjoyed this book very much and through reading gained some insight into WWI that you won’t find in your history books. The first half of the book uses quotes from the diary to point out different aspects on the war. There are chapters on how different people’s roles in British society changed during the war, and how the spirit of the British people was altered as the war began to stretch out over the years. The author also takes the time to talk about the diarist brothers and how their lives were affected by war. The second half of the book then presents the diary in its entirety. Michael Goode has done an excellent job of researching and presenting the story of Mabel Goode and her brothers, and the many ways that the war changed the culture.

This diary, edited by the writer's great-great-nephew, "Offers fresh evidence of how life was lived on the home front …. Complete with the most extraordinary rumours and misplaced optimism." To this, one should add two limitations: firstly, it stops in December 1916, and secondly, though Mabel Goode is rightly described as middle class, a doctor's family will have been very much at the top end of it. Men folk were automatically officer class and those lower-class people she ever came into contact with were mainly servants.

Some facts were new to me: the extent of German raids on the East coast, and that warnings were given by means of lowering the domestic gas pressure. The extent of German starvation in the blockade - I had not heard of "Kriegsbrot" before. The extent of the voluntary effort by middle-aged women (Mabel did haymaking, supervised sandbag making and sewed Red Cross brassards) which must had added substantially to the efforts of employed and uniformed women.

I thought I had seen all the recruiting posters in the course of reviewing a number of books, but the author has found some less famous ones to add to Mabel's own work.

A truly moving read - you'll not want to put it down! You can appreciate this book on many different levels, and that's what's remarkable about it. Being a huge fan of women's narratives, it was refreshing to read a female account of the war and learn about historical happenings at the same time. As Mabel confides more of her feelings about the war, it's so easy to connect with her and feel as though you also are making the journey. It's precious to have such an instrumental part of our history told through the eyes of a 'normal' citizen. Credit to Michael Goode for capturing Mabel's narrative through such a thoughtful, honest and mindful lens. It was a lucky thing for Michael to have found his great Aunt's diary at the bottom of a trunk - thank you for sharing a remarkable piece of history with us.

This book is based on the World War 1 diary of Mabel Goode, which was discovered by Michael Goode and his grandfather at the bottom of a trunk just five years ago.

Rather than simply presenting a transcription of the diary, or even edited extracts, Goode has taken a bit more time to write seven short chapters that deal with both genealogy and social history, prior to the inclusion of Mabel's diary itself. This makes for a more satisfying book, particularly as the diary itself does not cover the entirety of the war but only three years - 1914 to 1916.

Goode tries to argue that Mabel's silence over the next two years is the result of the War Office commandeering her family home, or the realisation that the war was not going to be over any time soon. This is not entirely convincing - how many of us have simply got bored with writing a diary, or found ourselves too busy to write regularly, or have lost or thrown away written accounts? However, Goode's attempt to look beyond Mabel's diary and to build a picture of her and her family's life, creates an engaging and different account of WW1.

It is very well written and informative and narrowly missed being chosen as Editor's Choice this month.

'It would make a poignant film...an endearing spotlight that falls on Mabel Goode'

It’s an endearing spotlight that falls on Mabel Goode.

In the preface to the second volume of his World War Two diary, James Lees-Milne, arguably the greatest British diarist of his time, laid down the ground rules for diary-keeping. "A diary", he wrote, " ...is necessarily spasmodic and prosaic. But it must be spontaneous. It must not be doctored....it will be full of inconsistencies and contradictions. It reflects the author's shifting moods, tastes, prejudices and even beliefs, to few of which he remains constant for long." The First World War diary of Mabel Goode meets all these criteria and more. It offers a superb contemporary portrait of a nation coming to terms with the demands of total war. To the historian it offers fresh evidence of how life was lived on the home front during the First World War, complete with the most extraordinary rumours and misplaced optimism. Thus on the 12th September 1914, we read that "...one really does not see how the War can go on much longer. The French say it will be over Christmas. It seems quite likely." The diary also offers readers not only the minutiae of Britain at war including the rise in food and fuel prices, but vivid accounts of the Zeppelin raids. Personally, one has only two regrets. The first, that diary stops in December 1916, with news the fall of Romania to the Central Powers and the accession of Lloyd George, ( " I don't trust LG but he has great energy& will probably get things done..."),to the premiership. The second, that Mabel's diary was not available to me when I was writing my history of the British home front, 1914-1918. Extracts from it would have undoubtedly enhanced my own account. But at least it is now available to the historian and to the general reader alike, both of whom will delight in it. And I have no doubt that it will have an honourable place on the history shelves alongside the diaries of Ethel Bilbrough and Georgina Lee and the works of Constance Peel and Caroline Playne in giving us such a splendidly readable picture of Britain at war a century ago.

Former Senior Historian at the Imperial War Museum and author of The First World War on the Home Front, Terry Charman.

Mabel Goode (1870-1954) was the youngest of three. She was principally raised by her step-mother, both her parents having died before she was ten. From 1881-7 the family lived in Heidelberg, Germany, meaning she knew the people that became Britain's great enemy in her lifetime. In later life, Mabel lived quietly, as a slightly eccentric vegetarian in the Lake District and funded holidays to Italy with paintings, never marrying (although a love story exists). Mabel recognised the Great War as the most important event of her life and recorded it from 1914-16. The editor of this diary, Michael Goode, is the Great-Great Nephew of Mabel Goode. Michael read History at Gonville & Caius College, University of Cambridge and worked on projects for the Fitzwilliam Museum, University of Cambridge.