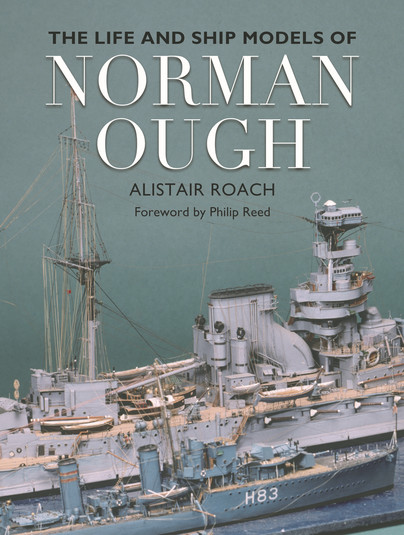 The Life and Ship Models of Norman Ough (Hardback)

You'll be £25.00 closer to your next £10.00 credit when you purchase The Life and Ship Models of Norman Ough. What's this?
+£4.50 UK Delivery or free UK delivery if order is over £35
(click here for international delivery rates)

Norman Ough is considered by many as simply the greatest ship modeller of the twentieth century and his exquisite drawings and meticulous models have come to be regarded as masterpieces of draughtsmanship, workmanship and realism; more than technically accomplished ship models, they are truly works of art.

This new book is both a tribute to his lonely genius and a practical treatise for model shipwrights. Ough lived most of his adult life far from the sea in a flat high above the Charing Cross Road in London, where his frugal existence and total absorption in his work led to hospitalisation on at least two occasions; he was an eccentric in the truest sense but he also became one of the most sought-after masters of his craft. Earl Mountbatten had him model the ships he had served on; his model of HMS Queen Elizabeth was presented to Earl Beatty; film production companies commissioned models for effects in several films.

Incorporating many of his original articles from Model Maker Magazine, his detailed line drawings now kept in the Brunel Institute, and photographs of his models held in museums and at Mountbatten’s house, this book presents an extraordinary level of practical information as well as an inspiring panorama of perhaps the most perfect warship models ever made; modelmakers, naval enthusiasts and historians will welcome his remarkable insights into the ships of the two World Wars.

An important biography of a skilled modeller who devoted his life to his art, and the models themselves are inspirational.

In any case, a must for both model builders and interested parties as well as for every collector of scale models.

Norman Ough will be remembered as one of the best builders of warship models in the 20th Century. Not only that, he was a superb draughtsman and had an intimate knowledge of the Royal Navy and its vessels.
This book is a very good read, whether you are a modeler or just interested in the ships and equipment of the Royal Navy.

An amazing, almost intimidating view of the method, modelling, drawings, and a life of a builder so obsessed with his work that some may say he was a man who went down with his ships.

An inspiring volume for the modern modeller.

The author of this book has captured many unknown facts of Norman Ough's history with help from Norman's family. An excellent book for reference.

Norman Ough was a celebrated and incredibly skilled ship modeller. Sadly he died in 1954 after a life that could best be described as eccentric and deeply private, but leaving a legacy of a body of work in drawings and model making that is quite incredible. The Book looks at Mr Oughs life briefly with a chapter at the beginning but really does focus on the models. And what models they are. Mr Ough built commissions for people including Earl Mountbatten and was the chief model-maker in residence at the National Maritime Museum.

His models were all entirely scratch-built and in scale from 1/2000 to 1/192, his research was meticulous and no detail is left out. It is said that when he presented his model of HMS Queen Elizabeth to Lord Beatty at a special ceremony, the Lord and several of the ship's former company examined the model and could find only two faults: two oars too many in one of the boats and one step short on a companion-way.

His models were made possible by exacting drawings he made from admiralty plans and other research and several examples are presented. It appears Mr Ough was a superb draughtsman as well as an outstanding model-maker.

The book covers all of this very well and while it might be of more peripheral rather than direct re-search value to many modellers I personally think it is very much worth owning and inspirational to anyone that appreciates the sheer craft of great (and I mean great) ship modelling. Reading it has certainly left me very fired up to get modelling and get researching more for builds. Recommended.

Undoubtedly, it is a book that deserves a place in the library of any naval modeller.

An interesting and above all instructive book for all lovers of naval modelling.

Very well illustrated with photographs of many of the models, and has a good deal of background information regarding their commissioning. Ough's attention to detail was nothing short of astounding.
Excellent reading for anyone interested in the hobby, recommended.

Some individuals are so uniquely eccentric — and perhaps so gifted in pursuing their passions, no matter how far off the beaten path — that they give the rest of us permission to be ourselves just a bit more comfortably. As I recently discovered, Norman Ough* (1898-1965), at one time “the world’s most famous ship model maker,” is just such a person for me.

The Life and Ship Models of Norman Ough, by Alistair Roach, brings Ough’s life and work beautifully to light in a volume rich in photographs, drawings, technical detail and personality.

For any ship modeller, I am sure you will enjoy this one, not just for the interesting story of the man, but for the details in the drawings and the great attention to detail in the models themselves. Certainly enough to encourage you to want to go and have a look at them for yourself.

There are very few books about modellers and model engineers. Those that are available tend to feature individuals that are famous for
something else but happen to be interested in modelling. This book is different because it reviews the story of the modeller and his
models. Ough is considered by many to be the greatest modeller of the Twentieth Century. This is a very interesting story and includes
a selection of the finest drawings and photographs, much recommended.

ALISTAIR ROACH holds an M.Phil. with his research thesis on ‘Model Boats in the Context of Maritime History and Archaeology’ and he has published articles in The Mariner’s Mirror, The International Journal of Nautical Archaeology, Marine Modelling International and Model Boats Magazine. He is a ship modeller himself and brings a practical slant to his writing.