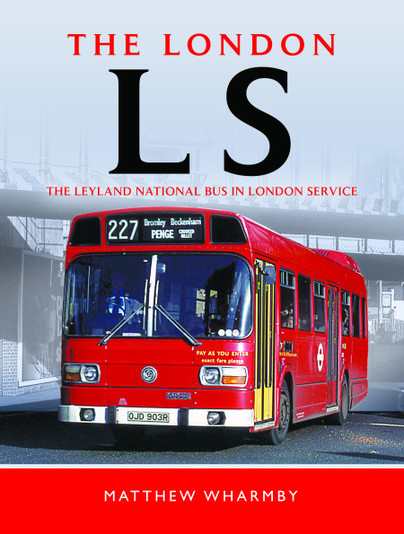 Click here for help on how to download our eBooks
Add to Basket
Add to Wishlist
You'll be £10.00 closer to your next £10.00 credit when you purchase The London LS. What's this?
Need a currency converter? Check XE.com for live rates

Dissatisfied with the reliability of its AEC Merlin and Swift single-deck buses, London Transport in 1973 purchased six Leyland Nationals for evaluation. Liking what it saw of this ultimate standard product, where even the paint swatch was of Leyland’s choice, LT took up an option to buy fifty more from a cancelled export order and then bought further batches of 110, 30 and 140 to bring the LS class to 437 members by the middle of 1980. A year later the last MBAs and SMSs were replaced on Red Arrow services by sixty-nine new Leyland National 2s.

Straightforward but reliable, the LS satisfied London Transport’s single-deck needs for a decade and a half, often standing in for double-deckers when needed, and then going on to help hold the fort during the tough years of early tendering, during which some innovative LS operations introduced several new liveries and identities. The type served the ten years expected out of it with few worries, only starting to disappear when minibuses came on strength at the end of the 1980s. Although the LS was formally retired by 1992, refurbishment programmes gave survivors an extended lease of life, bringing us the National Greenway, the ultimate development of the Leyland National. Most of the Red Arrow National 2s thus became GLSs, and lasted until 2002.

An extremely comprehensive description is provided, both in text and a wide range of high quality illustrations.

He [Matthew Wharmby] offers a detailed account of these vehicles' increasingly colourful careers in London, including the major refurbishment that extended some of their lives.

This magnificent examination in extraordunary detail of the employment of Leyland LS buses in London's transport is rich and fascinating, beautifully illustrated and a truly beautiful book.