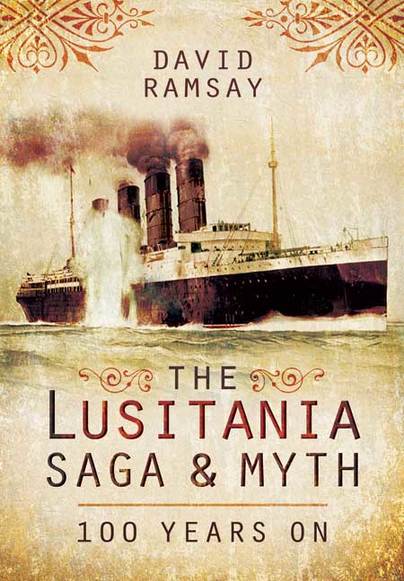 The Lusitania Saga and Myth (Kindle)

Add to Basket
You'll be £4.99 closer to your next £10.00 credit when you purchase The Lusitania Saga and Myth. What's this?
Need a currency converter? Check XE.com for live rates

The RMS Lusitania entered service with Cunard in 1907. The first transatlantic express liner powered by marine turbines, she could complete the Liverpool-New York crossing in five days and had a top speed of 25 knots. She restored the British supremacy of the key North Atlantic route which the Germans had seized.

All this ended on 7 May 1915 when she was torpedoed by a German U-boat and sank 18 minutes later with the loss of 1,198 passengers and crew (interestingly 39% of those aboard survived whereas only 32% of those on the Titanic survived despite the latter taking 2 hours, 40 minutes to sink.)

The Author concentrates not just on the disaster but its aftermath including the political recriminations and the inquiry. As a result of the loss of 128 American citizens the Germans signed an agreement not to attack US shipping. Their breach of this was a major contributory reason, along with the Zimmermann Telegram, why the USA entered the War.

This is a fascinating study of a major shipping disaster with profound consequences.

It is difficult to think of a single sinking of a merchant ship in wartime that could have had such wide-reaching consequences. Inevitably, the sinking of the Lusitania has produced a wealth of conspiracy theory and a mountain of myth. A 100 years on is a good point to take a fresh look at the sinking, the known facts, the myths that should debunked, and the political map of the time. The author has superbly researched his subject and presented a well-argued review of the sinking and the political aftermath. Highly Recommended.

In this well researched account the author not only concentrates on the sinking of the vessel but also the aftermath, including the political recriminations and subsequent enquiry.

David Ramsey, through some excellent research, delves in to the history of the ship, the challenges that the Lusitania faced both prior to the war and also during the war, and the political recriminations after its sinking. This is one of the most fascinating studies in to a maritime disaster that really did have world changing consequences, and various myths have grown since.

This really is a well researched, well written account that all those who read it will enjoy, as the writing is engaging and it is well illustrated throughout with maps and pictures. Ramsey also reminds us that The Lusitania took 18 minutes to sink and that 1,198 people lost their lives, or 39% of those on board had survives, compared to the Titanic which took over 2 hours to sink and only 32% survived.

This is an excellently updated book for historian, enthusiast and general reader alike.