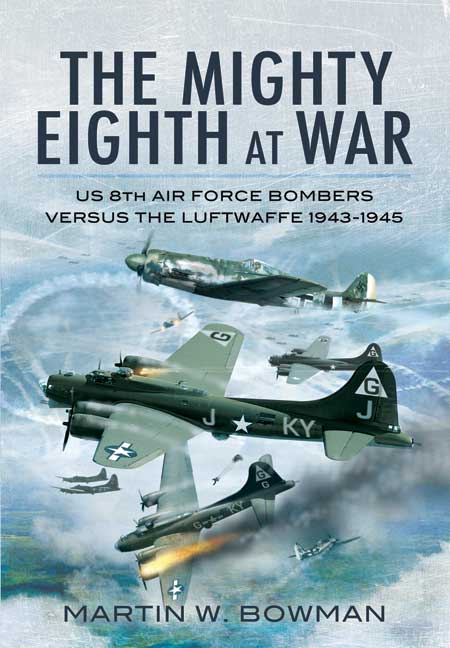 The Mighty Eighth at War (Kindle)

Click here for help on how to download our eBooks
Add to Basket
Add to Wishlist
You'll be £4.99 closer to your next £10.00 credit when you purchase The Mighty Eighth at War. What's this?
Need a currency converter? Check XE.com for live rates

From the beginning of World War Two the RAF's Bomber Command had been the only means of striking Hitler's Reich and its war machine. The entry into the war of the United States and the subsequent arrival in the UK of the Eighth Air Force was to more than double the Allied capability. The Flying Fortress and Liberator heavy bombers were mostly flown across the Atlantic by their young unblooded aircrew and many succumbed en route and never arrived. Flying in north Europe was a different ball game from American skies and it took a considerable time before the crews familiarised themselves with the vagaries of fog, low cloud, rain and snow. The American bombers bristled with defensive armament and elected to fly in close defensive formation during the day leaving the RAF to carry out nightime raids. With the arrival of long-range protective escort fighters the task became a little easier.

This book explains, including many first-hand accounts, how the American bomber force helped fight to eventual victory by decimating German industry, transport systems and breaking the Nazi war spirit.

I found it a moving book with a lot of details of the operations, but also the many personal reports are moving but exciting to read. The book also contains a number of original black and white pictures from that time. A lot of research has been done by the author and after the reading of this book, my admiration for those young crew member has only risen.

The author has produced a fine account of the operations of the Mighty 8th, two fine photo plate sections, crisp and well-researched text and a comprehensive review of the subject makes this a highly desirable book on the air war in Europe. It will also be appreciated by those Americans who come to Europe to visit the old airfields and other remains of the battle members of their family fought in.

This book is built around a large number of first-hand accounts written by the bomber crews of the US Eighth Air Force, recounting their experiences flying Liberators and Flying Fortresses over occupied Europe and Nazi Germany. These first hand accounts are linked by Bowman's excellent text, which explains the background to the individual raids being flown and their place in the evolving battle between the Allied bombers and the German defences and in the Allied strategic bombing campaign.

I do have two minor problems with this book. The prologue is credited to Bruce Sanders, but without any explanation of who this was or when the text was written. It very quickly becomes clear that this text was produced during the war, and after some checking I discovered that Bruce Sanders was the pen name for Leonard R. Gribble, a mystery writer who worked for the British government during the Second World War, essentially writing propaganda. I have no problem at all with the use of Sanders' work in the prologue, but Bowman really needs to have included a brief introduction to explain where this text came from.

The second problem comes with the footnotes. The book uses chapter end notes, an approach that is fine when the footnotes only include references, but here many of the notes contain some important historical information, and in this case page footnotes would have been much more useful.

These are minor quibbles. The main text is utterly compelling, providing us with the authentic voices of the bomber crews of the Eighth Air Force as they took part in the seemingly endless and costly bombing campaign over Germany. Don't expect a detailed history of the Eighth Air Force's role in the strategic bombing campaign - that isn't Bowman's aim. Instead, this provides us with some insight into the experiences of the men who flew the bombers, and some of the most important developments in that campaign.

It is interesting to compare this book with Bowman's similar book on the Mosquito, 'Mosquito Mayhem'. In the Mosquito book one gets more of a sense of adventure, while here the mood is often sombre and the tone one of loss. The 8th Air Force suffered much heavier losses than the RAF's Mosquito squadrons, but they were also often suffered in full view of other aircraft in the bomber stream, so many of the eyewitness statements include accounts of watching other bombers being destroyed. The heavy bombers also carried many more men than the Mosquito, so each loss was a major tragedy. On the positive side there is more of a feeling of a team effort here, both within the large crews and within each unit. The heavy bombers relied on each other's firepower for protection, and so there was a real sense of the squadron as a single combat unit.

Martin Bowman is well known as an expert aviation historian and author.
and has written many excellent books on aviation subjects.

Much has been written about the exploits of the American air-forces based in the Uk,
During WW2 known as the MIGHTY EIGHTH.
However this book is a well written and will appeal to even those who have read the many previous
published accounts of the Eighth Air-force actions during WW2, as well as those who are just beginning
to learn about its distinguished wartime exploits.

Thrilling first hand accounts, an excellent picture of the part the eighth played in the final victory in europe. Highly recommended if you want to begin to understand about the Yanks who made such an impact on East Anglia and its inhabitants, who still remember the sight of the huge formations of B17 Flying fortresses and B24 Liberator bombers forming up en-route to bomb Germany and its occupied countries of Europe.

WW2 Connection recommend this book, an interesting and fascinating picture of the Eighth in action.

The entry in to the war of the United States and the subsequent arrival in the UK of the Eighth Air Force was more than double the Allied bomber capability in Europe. The author describes, using many first- hand accounts, the Eighth Air Force's role in decimating German infrastructure during the Strategic Bombing Campaign.

The US entry into the war and the subsequent arrival in the UK of the Eighth Air Force was to more than double Allied capability. The Flying Fortress and Liberator heavy bombers were mostly flown across the Atlantic by their young unblooded aircrew and many succumbed en route and never arrived. Flying in north Europe was a different ball game from American skies.

The Mighty Eighth at War represents a return to familiar territory for Bowman. Leaving aside the social impact of the Americans' takeover of so many of East Anglia's airbases, he concentrates on the action in the skies with a veritable cornucopia of vivid vignettes that form a memorable mosaic of flying experiences.

Martin W. Bowman's extended coverage of how the American bomber force, in tandem with the RAF, played its part in eventual World War II victory for the Allies, is an in-depth and sobering piece which fully utilizes first hand accounts to support the recollection of the efforts of the 8th Air Force. Focussing at the US' point of entry into the war, their bomber crews joined the RAF to increase Allied capabilities in the air. Bowman explains in meticulous detail the initial struggles of flying in unknown, hazardous skies, along with some of the historic air raids and missions which helped to decimate German industry and transport and eventually break the Nazi spirit. This is certainly a worthy addition to the collection of aviation enthusiasts; the first hand accounts are in-depth and respectfully uninterrupted, with posthumous technical notes on such passages where required for clarity. Overall, the author manages to cover all bases from technical analysis, to painting an evocative picture of how it must have actually felt to take part in such fierce and terrifying raids.