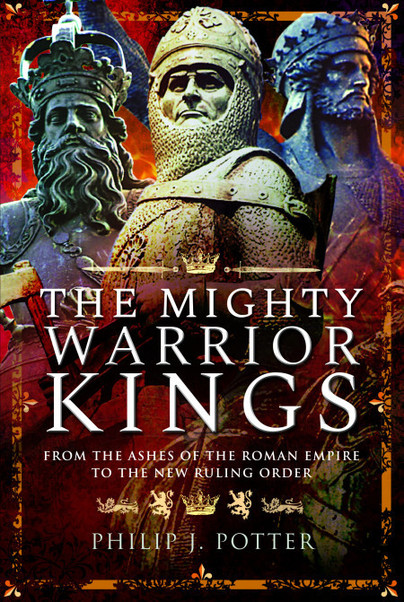 Click here for help on how to download our eBooks
Add to Basket
Add to Wishlist
You'll be £4.99 closer to your next £10.00 credit when you purchase The Mighty Warrior Kings. What's this?
Need a currency converter? Check XE.com for live rates

The Mighty Warrior Kings traces the history of early Europe through the biographies of nine kings, who had the courage, determination and martial might to establish their dominance over the fragmented remnants of the Roman Empire. The book begins with Charlemagne, who united large regions of current-day France, Germany and Italy into the Holy Roman Empire and ends with Robert the Bruce, who gallantry defended Scotland against the attempted usurpation of England. There are many famous warrior kings in the book, including Alfred the Great of Wessex, whose victories over the Vikings led to the unification of England under a single ruler, William I of Normandy, whose triumph at Hastings in 1066 changed the course of English history, while Frederick I Barbarossa led his army to victory in Germany and Italy solidifying and expanding the lands under the suzerainty of the Holy Roman Emperor. Among the lesser known monarchs discussed in the work are Cnut, whose victory at the battle of Ashingdon won the English crown and resulted in the creation of the North Sea Empire, which ruled over the kingdoms of England, Denmark and Norway, while during the reign of Louis IX of France the knights of Europe answered his call for the Seven Crusade to expel the Muslims from the Holy City of Jerusalem. From Charlemagne to Robert the Bruce, the warrior kings created a new Europe with a centralized powerbase and set the stage for the following Age of Absolutism.

This is an absorbing account of how the Warrior Kings, who emerged after the Fall of Rome, created a new world order. The Roman Empire fell suddenly in the West even though the Eastern Roman Empire was to continue until the Crusades. – Very Highly Recommended

A really well written and most importantly interesting read on the some of the kings that stood out after the Roman Empire perfect for history readers.

I still enjoyed this book and I can recommend it as summer reading. Readers will learn a good deal from it, especially about the non-British monarchs.

If you enjoy military history, you are going to LOVE this book! I have always been a fan of many of these figures, and getting a good in-depth view of their beginnings, their backgrounds, and what drove them to become the top dogs in their field was more than I could have ever dreamed.
Charlemagne, Alfred the Great, Richard the Lionheart, and Robert the Bruce are just a few of the big names that are talked about in this book!

I enjoyed this read, and look forward to what else this author will have to share!

Warrior Kings: From the Ashes of the Roman Empire to the New Ruling order by Philip J Potter covers a subject matter that is right down my alley. As a history junkie, particularly of antiquity, I was looking forward to reading this one very much.

Phillip Potter has penned several books covering various characters and periods of history such as Explorers of North America, Kings and Queens of the Renaissance, Gothic Kings of Britain and so on. So, this guy has form and he cite countless references throughout the book, the facts come flying at you thick and fast and I enjoyed the fact the author didn’t make too many editorial comments about these fascinating characters – leaving this up to the reader, I liked that.

The most enjoyable chapters for me were those about Alfred of Wessex, who finally achieved some sort of United England. Richard the Lion Heart, a terrific leader who ruled England and Western France and Robert I the Bruce the famous Scottish Warrior.

The problem with any historical figure is that most of us learn about through novels or movies - and most of what we learn is adapted to fit the plot, or just simply wrong. "The Mighty Warrior Kings" gives us an in-depth look into the lives of nine kings, all names that will probably be familiar. My husband would like me to give the book 1 star for the simple fact that I kept interrupting his reading with "Oh, that's fascinating. Did you know...?"! But no, this is a 5 star book that I thoroughly enjoyed.

Interesting book about medieval kings of Europe. Most of us only remember the historical figures we have seen in movies, so reading in depth does feel like more effort. However, the book does have details that we would not normally find easily, so history buffs are sure to find it engrossing.

This excellent book describes the aspects common to all the featured kings; the need to defend existing lands, to gain more land, to placate the increasingly complex familial connections and to protect the legitimacy of their reign and succession. So, not much to ask given the ever-changing circumstances that confronted their power.
The historical narrative that explains the particular conditions that conditioned each ruler is well presented although perhaps inevitably some themes are repeated, particularly the education and early years of the rulers.
That said, the feature that plays out most convincingly is the role of the Papacy in providing legitimacy, condoning land grabs, dispossessing opponent’s land and titles, dissolving marriages (and therefore power) and assisting when it suited the Papacy. The dependency of the Papacy on these strong rulers to ensure its own power resulted in a symbiotic but shifting relationship that over the period required the mighty warrior kings to keep on their toes; what had been agreed yesterday could easily be changed tomorrow by Popes only too aware of their martial weakness. Oh, and throw in demands to support eight Crusades (or face the consequences!). The Papacy emerges as they key influence, and the metronome for events in the Early Middle Ages. Recommended.

Robert the Bruce was coronated as King of Scots on 25 March 1306. One of the most famous warriors of his generation, he fought his whole life to regain Scotland’s place as an independent country. He is revered in Scotland as a national hero to this day.