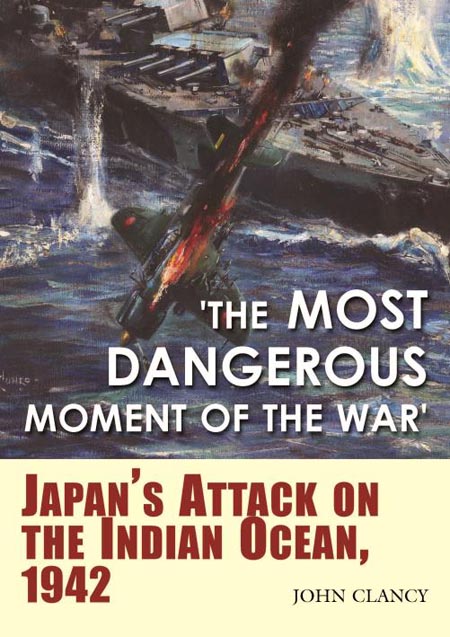 The Most Dangerous Moment of the War (Hardback)

Japan’s Attack on the Indian Ocean, 1942

Add to Basket
Add to Wishlist
You'll be £19.99 closer to your next £10.00 credit when you purchase The Most Dangerous Moment of the War. What's this?
+£4.50 UK Delivery or free UK delivery if order is over £35
(click here for international delivery rates)

In early April 1942, a little-known chapter of World War II took place, said by Sir Winston Churchill to be ‘the most dangerous moment of the war’ when the Japanese made their only major offensive westwards into the Indian Ocean. Historian, Sir Arthur Bryant said, ‘A Japanese naval victory in April 1942 would have given Japan total control of the Indian Ocean, isolated the Middle East and brought down the Churchill government’.

War in the Far East had erupted with the attack on Pearl Harbour on 7th December 1941 and it appeared that the British naval bases at Ceylon would be next. The Japanese had a vast new coastline to defend, stretching from New Guinea to Northern Burma, and having destroyed the American fleet at Pearl Harbour, could not accept the threat of the British Eastern Fleet based at Ceylon. Occupation of Ceylon was vital as it was a springboard into India. Without control of Ceylon, essential convoys from India to Europe and the Western Desert would be in constant danger and Allied naval strength in the Far East was at a dangerously low level.

With the Japanese forces seeming unstoppable, the Indian Ocean lay open and undefended. So far the Japanese had suffered no significant losses and the offensive continued unabated as they steamed westward, unopposed. It was generally felt Ceylon would be next to fall. It was a situation that could not be allowed to happen but the question on everyone’s lips was how soon would Japan take advantage of this strategic situation.

After the war Churchill acknowledged that the potential disaster at Ceylon had been averted by the brave actions of one pilot, Squadron Leader L.J. Birchall who in flying his Catalina flying boat on a regular patrol, spotted the Japanese warships massing some 350 miles from Ceylon. He was spotted by the Japanese whose aircraft shot him down but before so doing, Birchall sent a brief radio message back to his base. This gave the island’s defence forces sufficient time to prepare for the attack and to disperse the British fleet out to sea. Churchill acknowledged this pilot had made one of the most important single contributions to our victory.

John Clancy tells the story of the events of this dramatic but little known episode in which a major catastrophe was only narrowly averted, but in which over a thousand mainly British lives were lost, including the sinking of HMS Cornwall and HMS Dorsetshire.

John Clancy is an experienced author of over fifteen local history books and holds an MA in archaeology and heritage from the University of Leicester. His father was a survivor of the sinking of HMS Cornwall, and later in life he met another survivor who provided many missing links in the story.